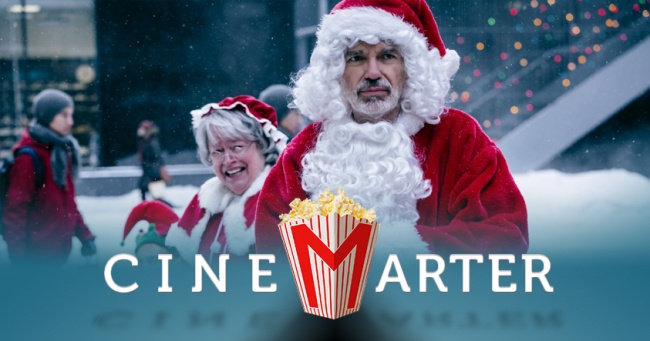 For those who watched the original Bad Santa in 2003, that might not come much as a surprise. But it does come as a disappointment. The original film had tons of insults, sure, but it also had genuinely dark and funny jokes to go alongside them. In addition, this sort of material was seen as more taboo even back then – now, with so many raunchy comedies coming out every year, it feels mundane. And when the characters haven’t changed at all, the plot’s basically the same, and we’ve substituted the jokes for more unimaginative insults, there’s almost nothing to like about Bad Santa 2. The handful of laughs it does generate fail to justify even its (thankfully) paltry running time. 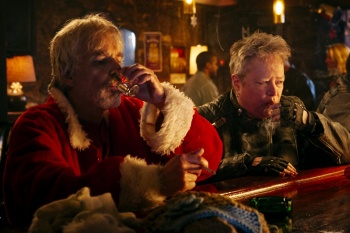 Billy Bob Thornton returns as Willie Soke, a chain-smoking alcoholic thief who used to pretend to be a mall Santa for a season before stealing anything valuable after the job reached its conclusion. His partner in crime was Marcus Skidmore (Tony Cox), who helped case the joint while working as an elf. There was a betrayal near the end of the first movie, Marcus went to prison, and Willie has spent the time since then working odd jobs, drinking, and planning his own death – all while being annoyed by the now-grown kid he semi-befriended in the first film, Thurman Merman (Brett Kelly).

The plot sees Marcus get released from prison and almost immediately contact Willie to set up a job – one run by his mother, Sunny (Kathy Bates), with whom Willie has a less-than-stellar relationship. The score: a charity run by Diane (Christina Hendricks) and Regent (Ryan Hansen). So, they insult everyone and everything for a while until the heist actually goes down. Bad Santa 2 feels like a weak repeat of the first movie.

Bad Santa 2 is another bad too-late sequel – a reminder that these things far more frequently than not turn out poorly.

If you are expecting anything in the way of an innovative story, thematic depth, interesting characters, or even social commentary from the perspective of a drunken nobody, you’ll be disappointed. Bad Santa 2 contains none of that and doesn’t make any pretenses about doing so. It wants to have vicious insults slung back and forth with the rapidity of a Comedy Central Roast in order to barely justify its 90-minute running time. There aren’t any jokes, none of it is clever, and because of a constant string of negativity, it’s almost no fun.

That might be one of the biggest reasons Bad Santa 2 feels like such a failure – there’s almost no positivity found throughout. We’ve got an awful main character, a terrible supporting cast, a constantly downtrodden tone – and insults, not jokes, to fill the time. The only “good” person in the film is Thurman, and he is here only for the other characters to make fun of him. Can we break for levity at some point? Can we have even a smidgen of fun? No. Okay, movie.

Billy Bob Thornton looks like he showed up for a paycheck – even more so than he did the first time around. Granted, the role calls for lethargy and a general lack of caring, but it felt less like acting and more like “I can’t believe they convinced me to do this garbage again.” Kathy Bates, Tony Cox, and Christina Hendricks all ham it up in supporting roles. And Octavia Spencer has a cameo, because she was in the first one and maybe she owed someone a favor. Nobody should be proud to have this movie on their resume.

Bad Santa 2 is another bad too-late sequel – a reminder that these things far more frequently than not turn out poorly. The film consists of almost nothing but insults, most of which aren’t creative or funny, and the constant negativity really brings you down. Nothing insightful is to be gleaned – the original had a little of that, after all – and there’s no reason to care. The plot was recycled from the first movie, the characters are caricatures at best and nonentities at worst, and the whole thing is exhausting, dull, and such a waste of time and money.

Bottom Line: Almost pointless, Bad Santa 2 fails to capture any part of what made the original successful.