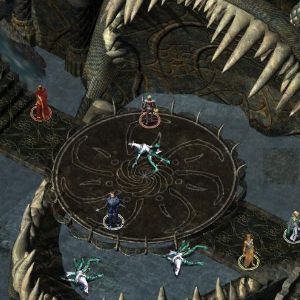 How do you review a game like Baldur’s Gate II Enhanced Edition? The original Baldur’s Gate II is one of the best, most important and influential RPGs of all time, and there’s been nothing like it since. Although the Enhanced Edition suffers from a number of flaws, they’re related almost exclusively to the new content. Do we penalize a game because its efforts to improve upon brilliance fall short? I don’t know – but I do know that the streets of Athkatla and the world beyond remain as magical as ever.

Baldur’s Gate II Enhanced Edition resurrects the glorious realm of Amn with a number of enhancements – hence the title – that bring the game into the modern era without changing or corrupting the core essence of the experience. The backdrops are “remastered” but essentially unchanged, for instance, but the game supports widescreen monitors and resolutions beyond anything that existed when Baldur’s Gate II was new. It’s even possible to zoom the view in and out, although an up-close look at the battlefield isn’t quite as pretty as a distant overview (there’s only so much you can do with decade-old character models, after all.) The Enhanced Edition “feels” effectively unchanged from the original release, and in a nice surprise both Shadows of Amn and the Throne of Bhaal expansion use their original intro cinematics rather than an updated opening, as their enhanced predecessor did.

Be that as it may, there’s more going on here than just a few tweaks and updates. The three new NPCs added in the previous game – the Calishite monk Rasaad yn Bashir, the half-elf wild mage Neera and the half-orc Blackguard Dorn Il-Khan – return for the sequel, joined by a fourth, a mysterious thief named Hexxat. Each brings a unique adventure to the table that will take the player, briefly at least, far beyond Amn to the realm of Thay and even the Plane of Shadow. More importantly, they’re almost seamlessly integrated into the game; the voice acting is good and the newly-added areas are as well-rendered as the original material, even if the dialog takes a few too many cheesy liberties, such as quoting “Hotel California.” Newcomers to the series probably won’t be able to tell that the new material wasn’t there from the beginning.

The interface has been tuned up as well. The menu now includes a quicksave button and a help option that brings up a simple breakdown of the game’s controls, and a “quick-loot” button makes it much easier to collect the inconveniently huge piles of loot left in the wake of big battles. Character screens have been redesigned to be much more informative and accessible, while widescreen support means the game’s sweeping vistas look better than ever. Rounding things off is The Black Pits 2: Gladiators of Thay, an arena-style combat simulator in which you’ll lead a party against an increasingly difficult array of enemies. The Black Pits 2 exists outside the Baldur’s Gate narrative and offers only the most threadbare of stories, although it does rather amusingly tie into the Black Pits of the previous game, but it’s a handy fix for players who just want to jump in and beat people up.

While not excessively ambitious, this is a largely impressive overhaul of a great game – albeit with a few notable problems. Midway through Hexxat’s quest, for example, an event necessary to progress failed to trigger, even after multiple reloads and restarts, and while I was able to get past it thanks to some aid from the developers, the quest line was dead in the water until that happened. Something very similar happened to Dorn’s quest, when a character he needed to kill in order to proceed simply failed to show up. Reloading did correct that problem, but it would be easy to just forge ahead without realizing what was missed, dooming Dorn’s storyline to an inconclusive oblivion. 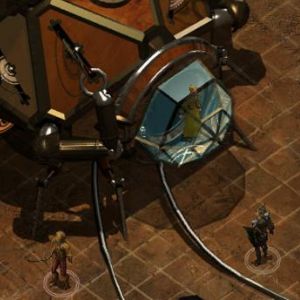 In The Black Pits, the lead character was killed in combat but refused to acknowledge his demise: His portrait was grey and he wasn’t on the playing field, yet NPCs continued to speak to the party as if they were talking to him, and worse, I couldn’t remove him from the lineup, leaving the party stuck a man short. It also crashed to the desktop during the early stages of Hexxat’s quest and locked up a couple of times as well, although in fairness it’s arguable that crashes and locks are just part of PC gaming life, especially in one that’s almost old enough to drive.

A number of smaller bugs and glitches also made their presence felt – Hexxat is referred to as “he” at one point and somehow walks out of a magically-sealed room at the end of a conversation, and NPC pathfinding is as awful as ever – and while none of them were as damaging as the showstoppers mentioned above, they do detract from the overall experience and leave the game feeling rushed, as though it was a late beta rather than a final release version. Bugs can, and no doubt will, be fixed, and in fact Beamdog said in response to my Hexxat complaint that an update is already in the works (and may be ready by the time you read this) but right now it feels like it needs one more round of top-to-bottom polishing before it’s ready to go out the door.

So where does that leave us? Baldur’s Gate II is a magnificent and unparalleled RPG experience that represents the pinnacle of BioWare’s creative accomplishments, and it’s as magical now as it was in 2000. But that spell was woven almost 14 years ago, and the new material really doesn’t add much freshness and will require more work to feel finished. Four new characters with unique side quests totaling in the neighborhood of a dozen hours of play is nothing to sneeze at, but the stock game already had 17 NPCs who could join your party and 60 hours of core gameplay that could climb to an estimated 300 hours in total. In that context, the four newbies seem a somewhat less-than-compelling reason to play.

That’s not to say there isn’t an audience for Baldur’s Gate II Enhanced Edition. RPG fans who missed it the first time around would do very well with it, and it’s a convenient modernization for oldsters looking for a jolt of nostalgia without having to dick around with patches and mods and the aggravation they entail. Die-hard fans of the franchise who have been playing around with it since the original release, on the other hand, may find that the new content and upgrades it offers don’t quite make it a mandatory addition to their collections.

Bottom Line: The enhancements aren’t quite ready for prime-time, but Baldur’s Gate II remains one of the greatest RPGs of all time and an unsurpassed D&D experience. The improvements to the interface are fantastic, and if the new content gets the final wax-and-polish it deserves, it will be too.

Recommendation: Hardcore Baldur’s Gate fans comfortable installing mods and patches likely won’t find much to get excited about, but for newcomers and nostalgia-seekers Baldur’s Gate II Enhanced Edition is a great point of entry into one of the finest RPGs ever made.