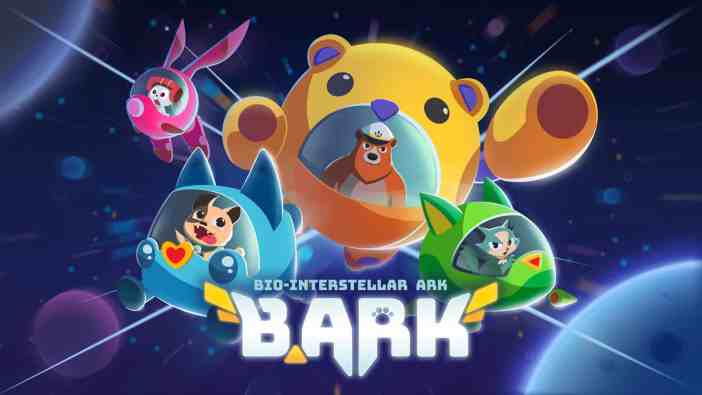 When cute ‘em up B.ARK was shown in Nintendo’s Indie World Showcase back in March, developer Tic Toc Games noted that people compared the game to Star Fox. The team had many conversations about that comparison during its developer chats.

B.ARK’s main inspiration comes from classic SHMUP games like Gradius and especially cute ‘em up genre offshoots such as Parodius. However, the goal was to make B.ARK accessible for all ages. The classic SHMUP games were made very much with the old-school quarter muncher style in mind. This meant that players would drop a quarter in an arcade game, die, and then drop in another quarter.

“We wanted to make sure players could feel a sense of camaraderie playing couch co-op with each other, along with a little bit of difficulty of a SHMUP, but not quite the full bullet hell aspect,” explained Co-Director Michael Herbster.

The game will have several difficulty modes, with the easy mode being for players who just want to go through all of the levels and enjoy the art and aren’t interested in the breakneck speed that most SHMUPs require. In this mode, the team is also considering the impact of collisions. If you’re against a wall at the bottom or top of the screen, you don’t have to worry about it outright destroying you.

Hard mode is definitely for players who want the classic SHMUP feel. Although, the mode doesn’t lean quite into the bullet hell aspect either, which Herbster describes as “where you see people at TGS that are inching ever so slightly into bullet patterns and barely scraping by.” Players may have to retry a level a few times to progress nevertheless.

Players who do beat B.ARK on various difficulty modes will be rewarded. Upon normal completion of the game, a Boss Rush mode unlocks, where players can fight through bosses and minibosses in a random order. Hard mode unlocks after beating Normal mode, and if Hard is conquered, then even more surprises will be unlocked.

Gomez explained that the team is looking into additional accessibility options such as color coding at the moment. He added, “As far as controller accessibility, we haven’t touched on that yet, but we have been trying to be careful on strobing and other things that may cause seizures. I know that’s something that’s common in SHMUP games. We still need to do more research on that.”

Herbster noted that his design functionality for four player co-op in B.ARK goes beyond its cute and cuddly artistic representation. He cited Super Mario Bros. 2 as an example, where all four characters aren’t necessarily balanced, but there’s a character archetype for every player: “If you want the super jump, you want Luigi. If you want the float ability, you’re going to pick Princess Peach.” 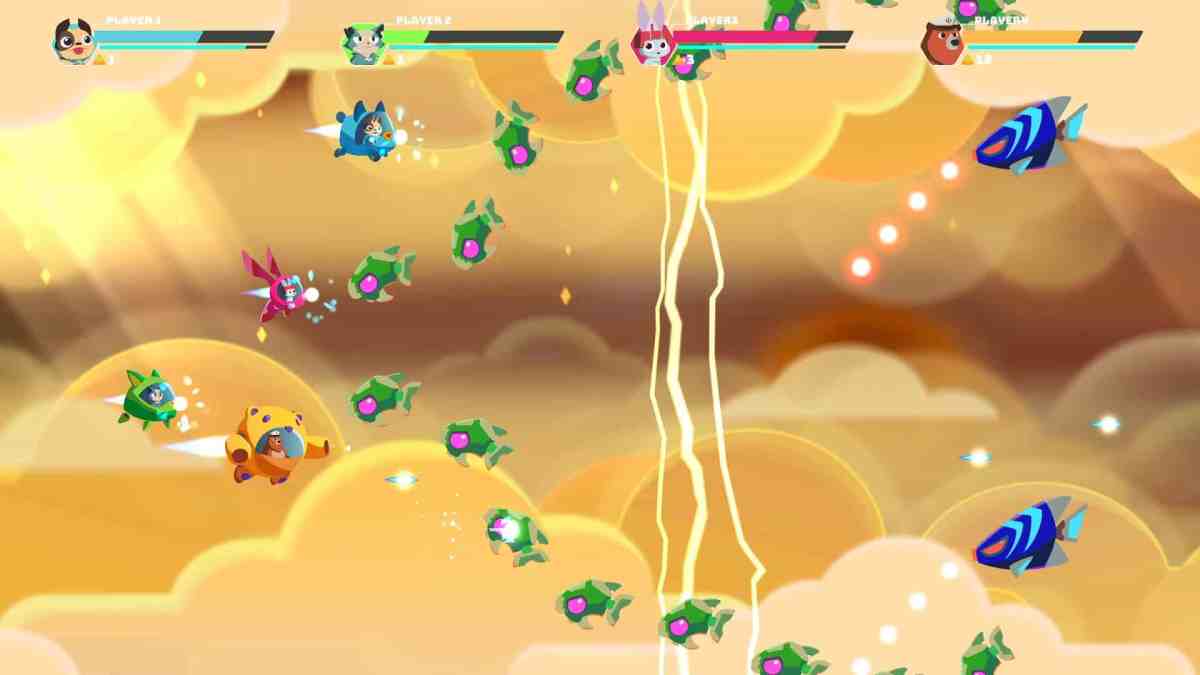 In turn, the four different characters in B.ARK have their own strengths. Lucio the Bear has more HP, but he’s a little slower. However, he still retains his dash maneuver that is the same speed as everyone else’s, which adds to the overall balance. Meanwhile, Marv the Rabbit is the fastest character on screen, but his tradeoff is that his hits are weaker.

Felicity the Cat is the DPS glass cannon. She can definitely dish out tons of damage, but she goes down quicker than anyone else. Lastly, Barker the Dog is B.ARK’s all-rounder like Mario. His shots and speed are average. Barker’s Super ability is being able to turn enemies into helpers. His new friends become extra side ships that fly in formation around Barker, giving him some extra gunners, and provide other cool functionality when fusion-combined with other pilots.

While B.ARK is made with co-op in mind, it can also be enjoyed as a single-player experience. Herbster explained that from a design standpoint, he still wanted single player to be fun and allow players to do cool things. He thought about that when he introduced something called Super Fusion. In co-op if you’re near another player, you can pass by each other to enable the aforementioned fusion connection and enhance Supers with whomever you connect with.

Since you can’t do that in single-player, there are pickups that allow you to do the fusion without having the other pilot there. For example, if you have Lucio’s pilot pickup and you’re playing as Felicity, then she will trigger her normal base Super and activate the fusion as if the other player were there. 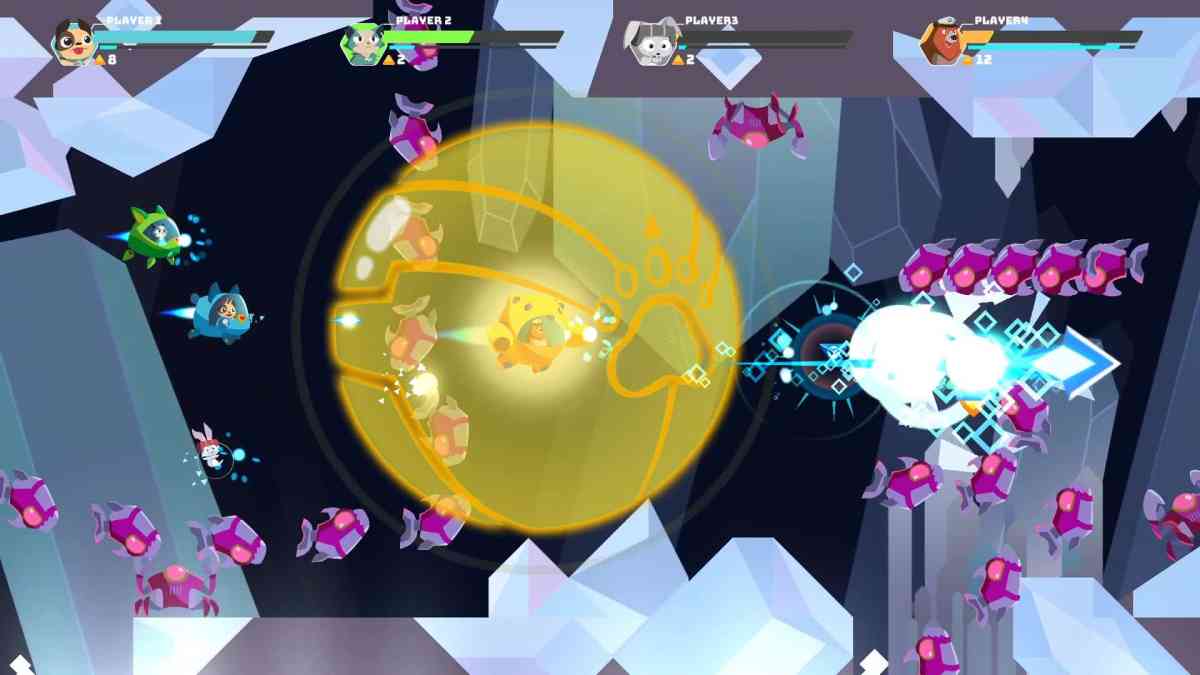 As players progress deeper into B.ARK and its levels, the camera will start to follow wonkier movement patterns. Players are not always going to be just going left and right when the camera starts to branch out. A variety of different enemy types will appear throughout the game as well, aiming to create a constantly fresh experience.

The overall action of B.ARK was built with fairness in mind. “It’s a lot of balancing, tweaking, and (getting it) balanced in co-op as much as it does in single player,” said Herbster. “The environments are fresh, the camera controls and direction feel different than the last level, and there’s some storytelling in-between. Not so much that it interferes with gameplay, but enough if you want to take the story in, you can.”

Emily Tidd, community marketing manager, said that the team at Tic Toc Games wanted to pass on the feeling of accomplishment and joy to the next generation of gamers, especially their own kids. 2020, for obvious reasons, hasn’t been the easiest year to create a couch co-op game, but the team definitely believes that it accomplished that goal.

“Our kids became an important member of the B.ARK team, helping us try out level designs and letting us know which characters they liked,” she said. “That’s definitely been an extremely special part of the process and helped open our eyes to tons of possibilities. So with the help of our SHMUP-loving team and our ‘family QAs,’ we think we’ve made B.ARK a lot like a Saturday morning cartoon; it has a little something for everyone.”

B.ARK launches as a timed console exclusive on Nintendo Switch later this year with plans for a PC release as well.