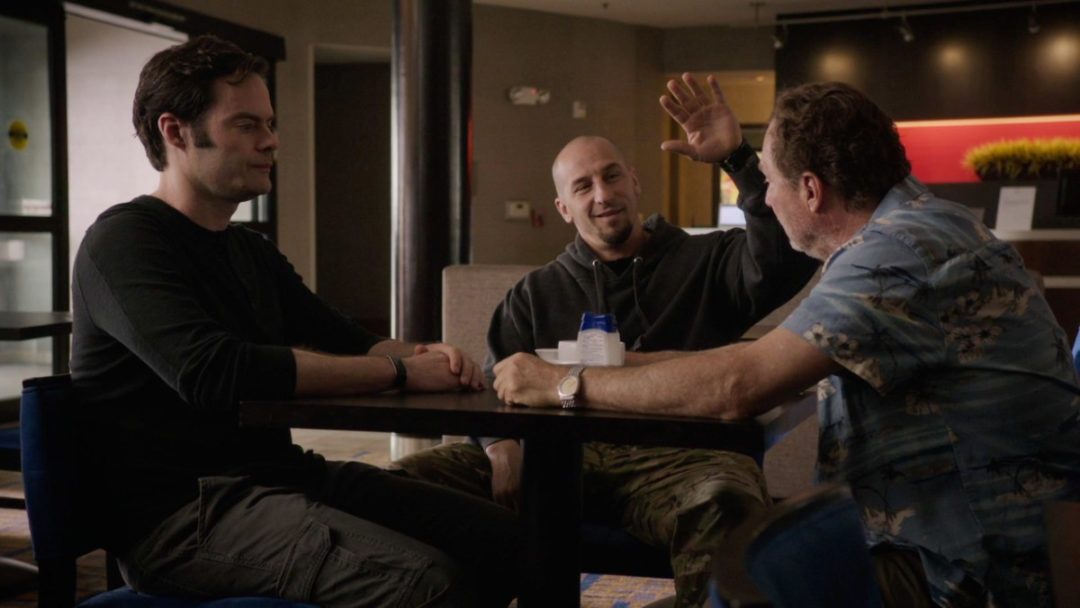 In action narratives, men are heroic, super-competent badasses who save their families and the world. In sitcoms, men are emotionally hamstrung Homer Simpson-esque doofuses who need to be schooled in basic social graces like small children. The HBO show Barry is a mashup of action-adventure and sitcom and with a brilliant inevitability, its male protagonist is a super-competent badass emotionally hamstrung doofus.

The title character of the series, Barry (Bill Hader), is a Marine who came back from Afghanistan and started a second career as a contract killer. While performing a hit in LA for the Chechen mob, he stumbles into an acting class taught by Gene Cousineau (Henry Winkler). Barry is bitten by the theater bug and decides to stop killing people for a living. But as with many screen assassins before him, getting out of the game turns out to be more difficult than he hoped.

Barry is incredibly good at his job, committing murder with an exhilarating and frightening efficiency. In the second season we’re shown a flashback of his first kill, which involved him shooting three Afghans at 700 yards — an almost superhuman feat which makes his hardened comrades laugh and whoop in incredulity. Back stateside. he casually offs trained Chechens wielding gigantic military grade weapons using only his pistol. “Don’t point that gun at me!” he warns. But the guy does, and soon he is done pointing anything at anyone.

Barry is fantastic at slaughter. He’s terrible at everything else. This is why, the series suggests, he does so much killing. Barry ends up an assassin because he didn’t know what else to do. After coming back from Afghanistan, he was taken under the wing of family friend Monroe Fuches (Stephen Root), an endearingly amoral scumbag who pressures and cajoles Barry into murdering people for money. Fuches takes half the fee for each hit, which Barry doesn’t even realize is grossly unfair. At one point, another ex-marine tells him he should kill Fuches. Barry looks like he’s swallowed his gum. “I can do that?” he asks.

Barry’s vacillation between superspy wielder of death and ineffectual pushover works because Bill Haider’s performance is so brilliant. The actor’s face is wonderfully mobile; his eyebrows scurry and struggle through every social interaction with barely restrained panic. When his careerist actor girlfriend Sally Reed (Sarah Goldberg) bullies him, he can barely figure out what’s happening. “You’ll be there for me, right?” he says ingenuously right after she tells him with bright indifference that she won’t. He’s similarly clueless when a cop corners him for murder. “We’re the same!” he tells her as he tries to convince her to let him go. It sounds like the false moral equivalence of a supervillain, but really it’s the confused bleat of a guy who is so unmoored from his own emotional life that he has no idea who he, or anyone, is.

It’s supposed to be cool and sexy and awesome when action heroes perform merciless acts of virtuoso murder. But in Barry, the protagonist only commits those acts of virtuoso murder because he’s a sitcom guy doormat. He lacks the spine to advocate for himself, and is so self-absorbed he can’t listen to others. As a result he ends up in terrible situations which he inevitably gets out of by committing atrocities. That scene with the police officer, for example, ends with him turning the tables with a brilliant strategic move. He doesn’t come off as a super ninja, though. All his whining and negotiating and self-deception is just a very unattractive prelude to violence. And with that prelude, the violence is stripped of any action star sexiness.

The sitcom tropes undermine the action movie cool. By the same token, the action movie tropes undermines the sitcom cuteness.  Barry takes acting classes to get in touch with his true self and learn emotional openness and honesty. It’s very much in line with the pat sitcom approach to  socializing men and teaching them moral lessons, from Homer to Sam Malone to Jake Peralta.

But Barry’s self-actualization is less than heartwarming when you realize that he’s a mass murderer who kills not just bad people (as he sometimes insists) but also anyone who gets in his way. In one instance, he even kills a close friend; he knows the guy’s wife and kid. After that murder, Barry is distraught; he breaks down in tears delivering his one line in his scene in acting class. That ends up adding emotional power to the performance. Everyone is blown away, including Sally, who tells him he’s a real actor, and encourages him to use the same process for all his work. He’s had a breakthrough. He’s learning to be an actor, and learning to be human. Huzzah!

Unfortunately, Sally doesn’t realize that in this instance Barry’s process involves murdering his friend. As we move into the second season, there’s some indication that the self-knowledge Barry gets through acting may lead him to stop killing people. At the same time, he seems to consider his progress as an excuse for avoiding accountability. His professional and personal journey is inextricable from his cruelty and his violence. He wants to be a good person, but to convince everyone he’s that good person, he continuously does things that are very bad.

Sally at one point accuses Barry of having issues with toxic masculinity. That’s in part because he has trouble managing anger. When he gets angry, he hurts people. But he’s also toxic because he is defined by masculine prototypes which are, to put it mildly, unhealthy. In one quip he mentions that he never had strong male role models. He doesn’t know any way to be a man except to vacillate between passivity and extreme violence, sitcom nonentity and action hero. The show suggests those are not so much opposites as two eyebrows flexing on the same hapless, deadly face.