Developed by DICE. Published by EA. Released on October 21, 2016. Available on PC (reviewed), PS4 and Xbox One. Review code provided by publisher.

With clouds of gas everywhere, shells exploding, and my fellow soldiers screaming in pain, I struggle to don my gas mask and shoot back at the soldiers charging my position. Just as we secure the position, I hear the squeal of a tank’s treads, and dive for cover. This is the newest shooter from EA and DICE, Battlefield 1. 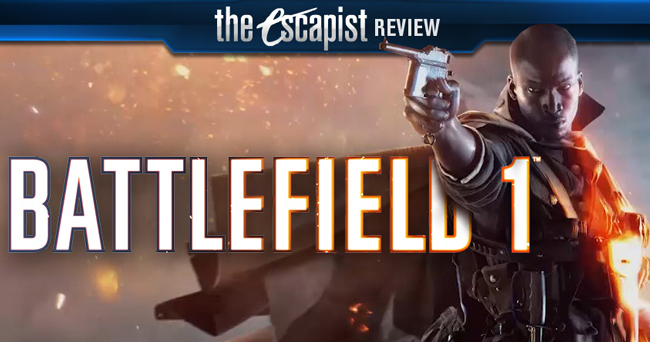 We’ve already had World War II shooters, Vietnam shooters, modern military shooters, and now we’re moving on to futuristic military shooters. But with the newest Battlefield game, DICE chose to turn back the clock a century, and drop gamers right into the middle of World War I. It turns out to be a great decision. The setting combines the familiar destructive environments of recent Battlefield games with the war-torn locales of what was known at the time as “The war to end all wars.”

As you might imagine, the military technology of that time period was somewhat lacking, especially when compared to the more modern entries in the series. Gone are the fighter jets, helicopters and main battle tanks. In their place we find their progenitors – rickety biplanes and unwieldy-looking, first-generation tanks. Infantry weapons are also much more basic. You can expect to see plenty of bolt-action rifles and early models of machine guns, as well as ample melee weapons, including fixed bayonets.

The first thing you’re likely to notice about Battlefield 1 is that it’s a brutal game. As you run through a multiplayer map, buildings will explode around you, soldiers will be screaming for help, or simply in horror as they burn to death from an enemy flamethrower or incendiary grenade. Clouds of mustard gas hang over the battlefield, sandstorms cloud your vision, and the entire game has a much darker feel than previous games in the series.

Battlefield 1 has done something I didn’t expect: it’s made me want to play Battlefield regularly again.

The other thing long-time series fans will notice is that while BF1 does include vehicles, they are not the dominating forces that you’ve come to expect in recent installments. In fact, the vehicles feel much more like BF 1942 or Battlefield: Vietnam‘s vehicles, in that they are powerful, but only really effective with proper infantry support. There’s a lot less dying to a random shot from a vehicle, and a much larger focus on infantry tactics.

You can experience the game’s darker feel in six different modes. Some will be very familiar, like that old Battlefield staple, Conquest. Others, like Operations, are brand new. Operations drops you into a series of maps that are based on actual battles from World War I. Each map is divided into sectors, and the attacking team tries to capture all of the points in a sector while the defenders try to hold them off. If the attacking team is successful, the defenders fall back to the next position. It’s easily the best new game mode that a Battlefield game has introduced since Conquest came along in BF 1942.

The other game modes are not as entertaining. The new War Pigeons mode is interesting, but only in that it has two teams fighting for control of a pigeon that is used to send requests for artillery strikes. It’s a ludicrous concept, but it actually sort of works as a game mode. Rush makes an appearance as well, but it’s somewhat diminished by its reduced player count (24 maximum). Other modes are more familiar, including team deathmatch and domination, but those don’t feel as much like Battlefield as they do every other shooter out there.

Outside of multiplayer, DICE has spent a lot of time on the singleplayer campaign in BF1, and it shows. For years, the series had no campaign at all, and only in recent installments has it become a focus. Battlefield is a series that was born in multiplayer, and was always at its best with large-scale battles. That’s tough to capture in a single-player campaign, but BF1 is DICE’s best effort yet. Instead of one story, the campaign is made up of six “War Stories,” each featuring a different soldier that the player controls. You can choose which stories you play, and they can be completed in any order.

There’s a lot of variety here, with one campaign focusing on a female Bedouin soldier who uses stealth and long-range sniping as her primary weapons, while another features a young British soldier who’s recruited as a driver in a tank. The campaign manages to capture a number of different aspects of the war, and contains a wide variety of experiences and characters. The campaign still comes in a bit on the short side, taking around eight hours to complete, but it’s a huge step forward for DICE to make a campaign that I would look forward to replaying.

Another piece of good news is that Battlefield 1 is largely bug-free. There are a few glitches that have popped up (including one ridiculously cool on where a zeppelin turns into a fiery tornado), but for the most part, the game runs well, at least in my experience. There’s also a full-fledged server browser, doing away with Battlelog and making finding a server much easier than it has been in the recent past. As with any game, there are some small complaints, most notably the inability to set your loadouts from the game menu or between rounds. That leaves you monkeying with your gear when you should be out shooting things.

Battlefield 1 has done something I didn’t expect: it’s made me want to play Battlefield regularly again. BF4 was fun, but it didn’t feel entirely new coming off of BF3. It’s a nice change of pace to jump into a game that isn’t taking me to space, or onto a futuristic battlefield. Instead, you can ride a horse into battle alongside one of the first tanks ever put into service. World War I straddled two eras in the evolution of warfare, and BF1 captures those eras well. I’ve already put close to 40 hours into the game, and I can’t wait to jump back in for more.

Bottom Line: Battlefield 1 is the game that DICE needed to keep the series fresh. The WWI setting makes for great gameplay, and it’s well-executed and super fun to play. The campaign is short but enjoyable, and the multiplayer is outstanding.

Recommendation: If you’re a fan of the Battlefield games, you absolutely must play Battlefield 1. It’s everything that’s great about the series, with a fun new game mode to boot.