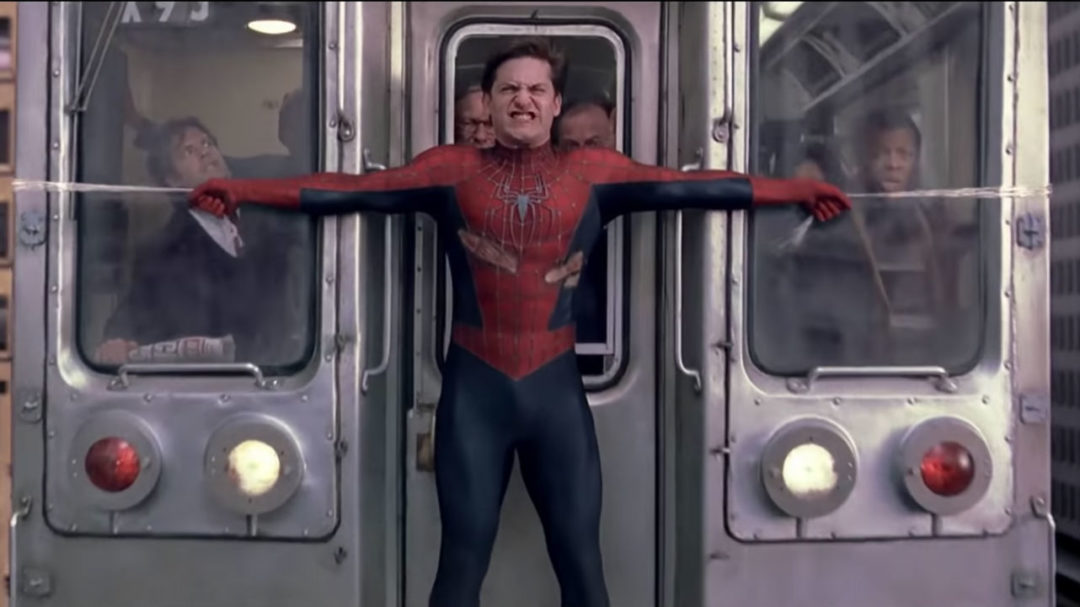 Spider-Man 2 obliterated the secret identity. Once a comic book film staple, the conceptual importance of superhero alter egos has dwindled to near irrelevance ever since Sam Raimi’s 2004 tights and spandex film. Where Clark Kent is a nonentity in Man of Steel and Wade Wilson dons a mask in Deadpool due to being self-conscious over his appearance, Peter Parker’s identity juggling crises in Spider-Man 2 were the last time a hero’s everyday life and costumed persona were in meaningful conflict with each other on screen. No other superhero movie has explored this internal psychological conflict better.

Peter Parker is stretched thinner than Mister Fantastic in a pasta grinder in this movie. Down on his luck in just about every way, and his crime-fighting responsibilities make it all but impossible to live a normal twenty-something’s life. Being Spider-Man means that scooping inattentive children out of the way of oncoming traffic and thwarting shoplifters takes precedence over college, work, and relationships both romantic and platonic. Peter’s future looks hopeless, penniless, and lonely. And this is his life before his newfound mentor Otto Octavius becomes the insane Doctor Octopus, a madman who uses his mechanical limbs wreak havoc across New York City rather than to cheat at Twister like a decent person.

Spider-Man 2 finds a profound pathos in Peter’s divided life. Being Peter Parker and Spider-Man — but never both to anyone — is impossible and the movie’s focus on the struggle to preserve the exclusivity of both personas illustrates why. Where Tony Stark is Iron Man and Bruce Wayne is Batman, Peter Parker and Spider-Man are a living Venn diagram; they’re distinct personae with different desires that  often conflict with each other. Peter is selfish and acts as Spider-Man out of a sense of duty rather than want. (With great power and all that jazz.)

Peter is tired of that bullshit in Raimi’s movie. Placing the needs of others above your own may be the right thing to do but it also kind of sucks to have to do. Spider-Man 2 repeatedly forces Peter to choose between himself and others. His uncle’s death motivates Peter to be virtuous, but also makes him destitute. Hero work doesn’t pay the rent, or allow him to fall in love (at least openly).The movie’s message is powerful and clear: doing the right thing will make makes you a hero but it will also isolate you utterly unless you’re willing to risk someone else’s life but trusting them with your identity.

Abandoning the conflict between his two egos is in part what makes recent iterations of the character so  feel so un-Spider-Man-like. Whether it’s the failed Amazing Spider-Man reboot or the solid Spider-Man: Homecoming, losing focus on the tug-of-war between Peter’s dual lives makes these takes on the character feel less definitive. In the Amazing, Gwen Stacy and the Lizard, Peter’s respective love interest and antagonist, both know he’s Spider-Man early on, deflating vital tension in the character’s inherent premise. The Marvel Cinematic Universe portrayal further doubles down on backing away from noting Peter’s disparate identities in favor of letting his best friend and Aunt May know about his wall crawling alter ego. Further diluting the character is the fact that Spider-Man: Homecoming’s Peter is hungry for action.  He wants to be an Avenger, a hero because it’s pretty cool not because he’s tortured by loss. Not very Spider-Man.

Peter isn’t a hero due to bravery or ability, even though he has both. He’s a hero because he puts the needs of others before his own. Even though his moral compass destroys his own life, Peter has the ability to change the world for the better and must fulfill his full potential for the good of mankind. Ultimately, as Spider-Man 2 understood, being a hero at the expense of personal gain is what it means to be Spider-Man.