As you probably have already heard, [mtg_card=Spinter Twin] got banned in Modern a few weeks back. As a fellow Twin player, I responded to the news in a totally rational manner.

All the Splinter Twin players, myself included, taking the sleeves off the deck tonight. #mtg pic.twitter.com/TyOJJjGVie— Justin Clouse (@Slycne) January 23, 2016

[mtg_card=Spinter Twin] was a deck that I picked up after becoming frustrated with constantly loosing to a single card. At the time I had been played a bunch of hyper-linear decks, like Affinity and Boggles, which often either run over the opponent or die to a silver bullet. [mtg_card=Spinter Twin] had evolved from its earlier all-in days to play a dual role of combo and tempo/control. Try to disrupt the combo too much and you died to [mtg_card=Snapcaster Mage] beats, but fail to respect it enough and you’d find infinite [mtg_card=Deceiver Exarch] staring you down.

I had a lot of fun playing the deck, [mtg_card=Spinter Twin] created some exciting topdeck scenarios that could get you out of the worst situations and I was always a little to eager to suit up a [mtg_card=Snapcaster Mage] with a full graveyard. I don’t necessarily agree with the decision to ban it, but this is the world we’re stuck with.

So in the interest of healing and moving on, here’s a few ideas of what to do with those spare [mtg_card=Splinter Twin]s now sitting around.

We’ve recently seen WotC be willing to unban cards as the Modern format changes and evolves. Part of the reasoning for banning [mtg_card=Spinter Twin] was the thought that it was suppressing other Blue decks. A similar reasoning was used for [mtg_card=Wild Nacatl], that it invalidated other aggro strategies by being the best aggro card, and that card. Even a boogieman all-star like [mtg_card=Bitterblossom] has barely made a splash. It’s not completely improbable that we’ll see a future where [mtg_card=Spinter Twin] gets unbanned. Please?

2.Set Aside a Copy for Commander – Anger

Fine WotC, I’ll [mtg_card=Splinter Twin] people in formats besides Modern! While [mtg_card=Splinter Twin] is technically legal in a few other formats, it’s too slow and fragile for the likes of Legacy or Vintage. Commander is really the only format that it’s still a reasonable card. If you’re Commander playgroup isn’t utterly adverse to combo, you can even use creatures outside the traditional ones to shore up additional combo sources, like [mtg_card=Midnight Guard] or [mtg_card=Intruder Alarm].

See WotC, [mtg_card=Splinter Twin] is a fun and wacky magic card that we should be able to play!

Ok, how about if you just ban [mtg_card=Deceiver Exarch] instead? It opens the combo up to [mtg_card=Lightning Bolt] and means that decks needs to splash into other colors for cards like [mtg_card=Bounding Krasis], so [mtg_card=Splinter Twin] can’t effectively be a [mtg_card=Blood Moon] deck as well. 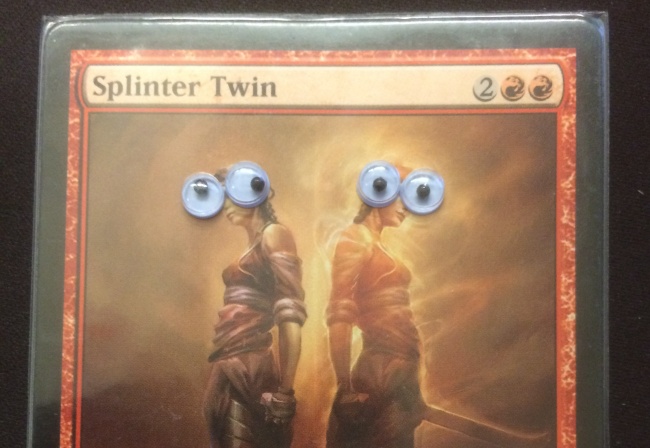 4. Use Them To Help Sort Cards – Depression 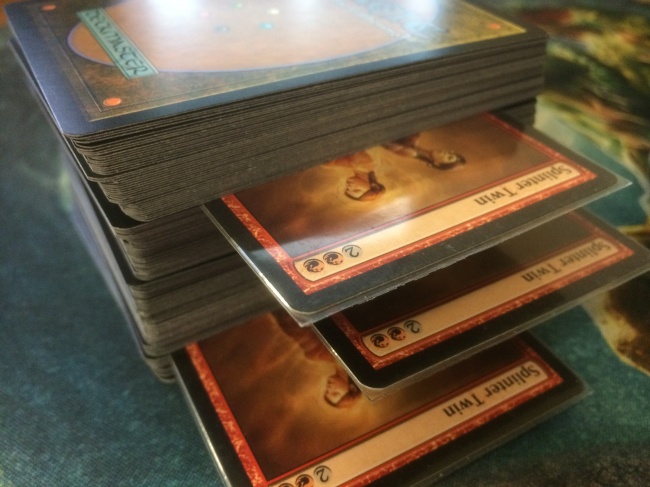 There’s a Modern Pro Tour going on this weekend. If you’re looking for a new Modern deck, I guess that’s a pretty good place to start.