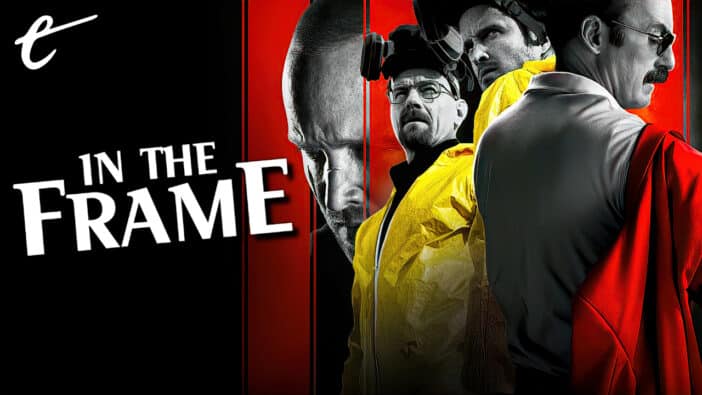 There has always been a stark morality to the worlds of Breaking Bad creator Vince Gilligan. These worlds are governed by rules that aren’t necessarily legal, but are instead moral. Early in Better Call Saul, cop-turned-gangland-enforcer Mike Ehrmantraut (Jonathan Banks) explains this logic to would-be criminal Daniel Wormald (Mark Proksch). “I’ve known good criminals and bad cops, bad priests, honorable thieves,” he states. “You’re now a criminal. Good one, bad one? That’s up to you.”

There is a bleakness to the world of Breaking Bad, with many of those involved in Albuquerque’s meth trading meeting horrific ends. Innocents like Hank Schrader (Dean Norris) die in the line of duty, but criminals like Gus Fring (Giancarlo Esposito), Walter White (Bryan Cranston), Lydia Rodarte-Quayle (Laura Fraser), and even Mike meet their own ends. Breaking Bad might be classified as a “neo-noir,” but it adheres to classic noir’s harsh moral insistence that crime ultimately doesn’t pay.

In Breaking Bad, Walter White is driven by the belief that “the universe is random, it’s not inevitable, it’s simple chaos; it’s subatomic particles in endless, aimless collision.” In “The Fly,” one of the show’s most divisive episodes, Walter struggles against the idea that maybe the universe isn’t entirely arbitrary, that decisions have consequences, and that the choices that he has made have consequences. Walter’s inability to accept responsibility for his own choices is his tragic flaw.

Comparing Breaking Bad to other “Golden Age” shows, like The Sopranos, Mad Men, and The Wire, essayist Chuck Klosterman contended, “(T)here’s one profound difference between this series and the other three, and it has to do with its handling of morality: Breaking Bad is the only one built on the uncomfortable premise that there’s an irrefutable difference between what’s right and what’s wrong, and it’s the only one where the characters have real control over how they choose to live.” 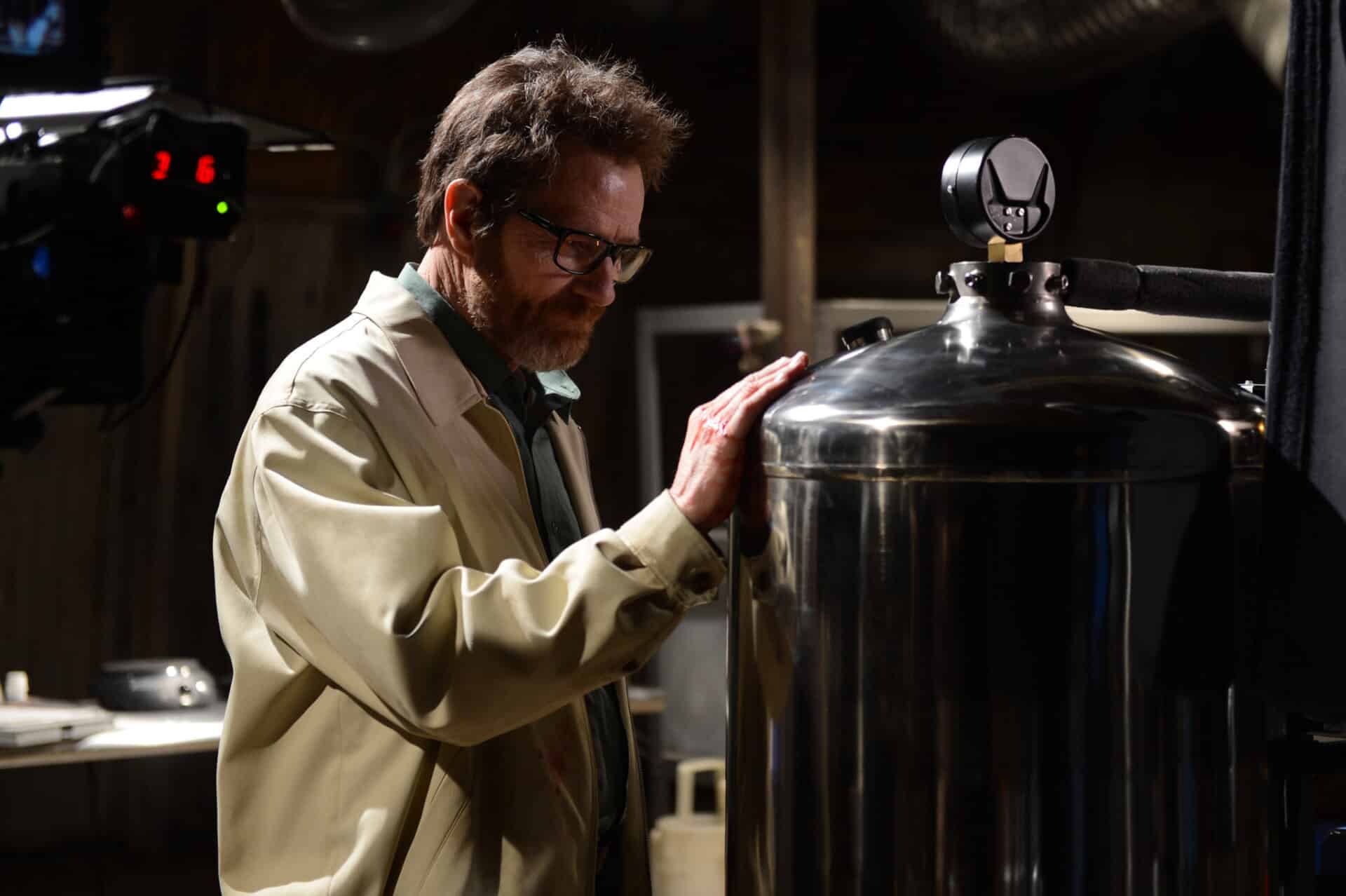 Based solely on Breaking Bad, Gilligan’s worldview can border on cruel and cynical. “I feel some sort of need for biblical atonement, or justice, or something,” he told The New York Times in July 2011. “I like to believe there is some comeuppance, that karma kicks in at some point, even if it takes years or decades to happen. … My girlfriend says this great thing that’s become my philosophy as well. ‘I want to believe there’s a heaven. But I can’t not believe there’s a hell.’”

One of the controversies surrounding “Felina,” the final episode of Breaking Bad, concerned whether Walter was ultimately redeemed through his choice to sacrifice his own life to save that of his long-suffering partner, Jesse Pinkman (Aaron Paul). “(I)f there’s any redeeming quality to him from the standpoint of the audience, it’s that moment,” argued Cranston of the finale. The word “redemption” featured in headlines covering the end of the series.

To be fair, the production team was unambiguous on the question of Walter’s redemption in the wave of publicity following “Felina.” Peter Gould, who would go on to show-run Better Call Saul, asked, “In the end, does it redeem him? How can you redeem yourself after all this death? I don’t think it is redemption. But I think it is a tiny bit of insight. He had the chance over and over again to be a good guy.” Gilligan more bluntly stated, “Walt is never going to redeem himself.”

Nevertheless, some critics took exception to what they perceived as Walter’s unearned rehabilitation. New Yorker critic Emily Nussbaum, who had only two weeks earlier drawn attention to the “bad fans” who watched Breaking Bad while rooting for Walter, was gently critical of how the finale smoothed over any potential obstacles in what she saw as Walter’s “journey to redemption.” It is possible to see both sides of this argument, to understand Gilligan and Gould’s intent along with Nussbaum’s reading. 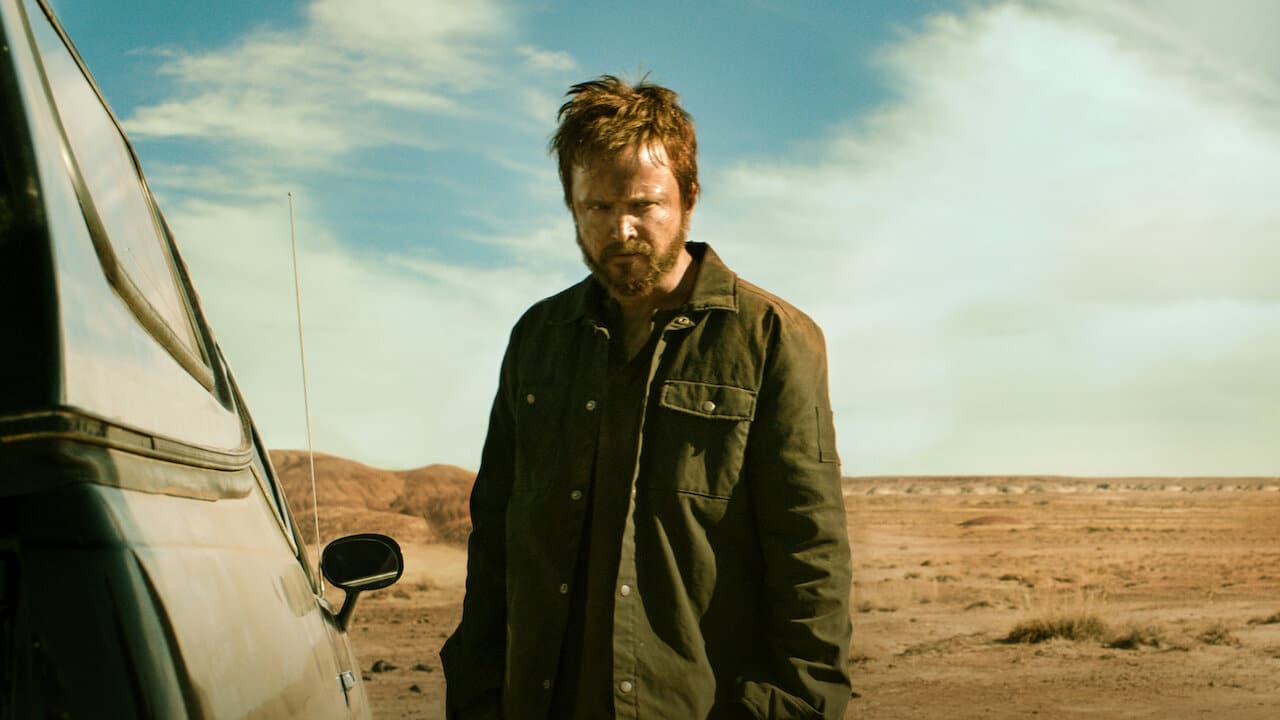 However, what is really interesting about the various postscripts that Gilligan and Gould have added to Breaking Bad is the way in which they grapple with these dangling questions. Breaking Bad was a story about decisions and consequences, with some audience members choosing to read redemption into its final act. In the stories that follow “Felina,” such as the movie El Camino and the Better Call Saul finale “Saul Gone,” Gilligan and Gould more actively engage with the idea of redemption.

While El Camino is written and directed by Gilligan and “Saul Gone” is written and directed by Gould, the two stories are structured very similarly. Both begin with a flashback, in which the leads — Jesse Pinkman and Jimmy McGill (Bob Odenkirk) — discuss the concept of regret with the now-deceased Mike Ehrmantraut. Both then cut to that lead character in the present day, fleeing the authorities. Both narratives are intercut with flashback scenes featuring other now-deceased characters.

Both stories are about the direct aftermath of “Felina.” El Camino joins Jesse in the final moments of Breaking Bad, as he drives away from the white supremacist compound where he had been held as a prisoner. Almost immediately, police cars come roaring over the horizon, arriving as an inevitable consequence of Walt’s actions. The present-day plot of El Camino follows Jesse as he attempts to escape to Alaska, to free himself of all the pain and suffering that he has endured. 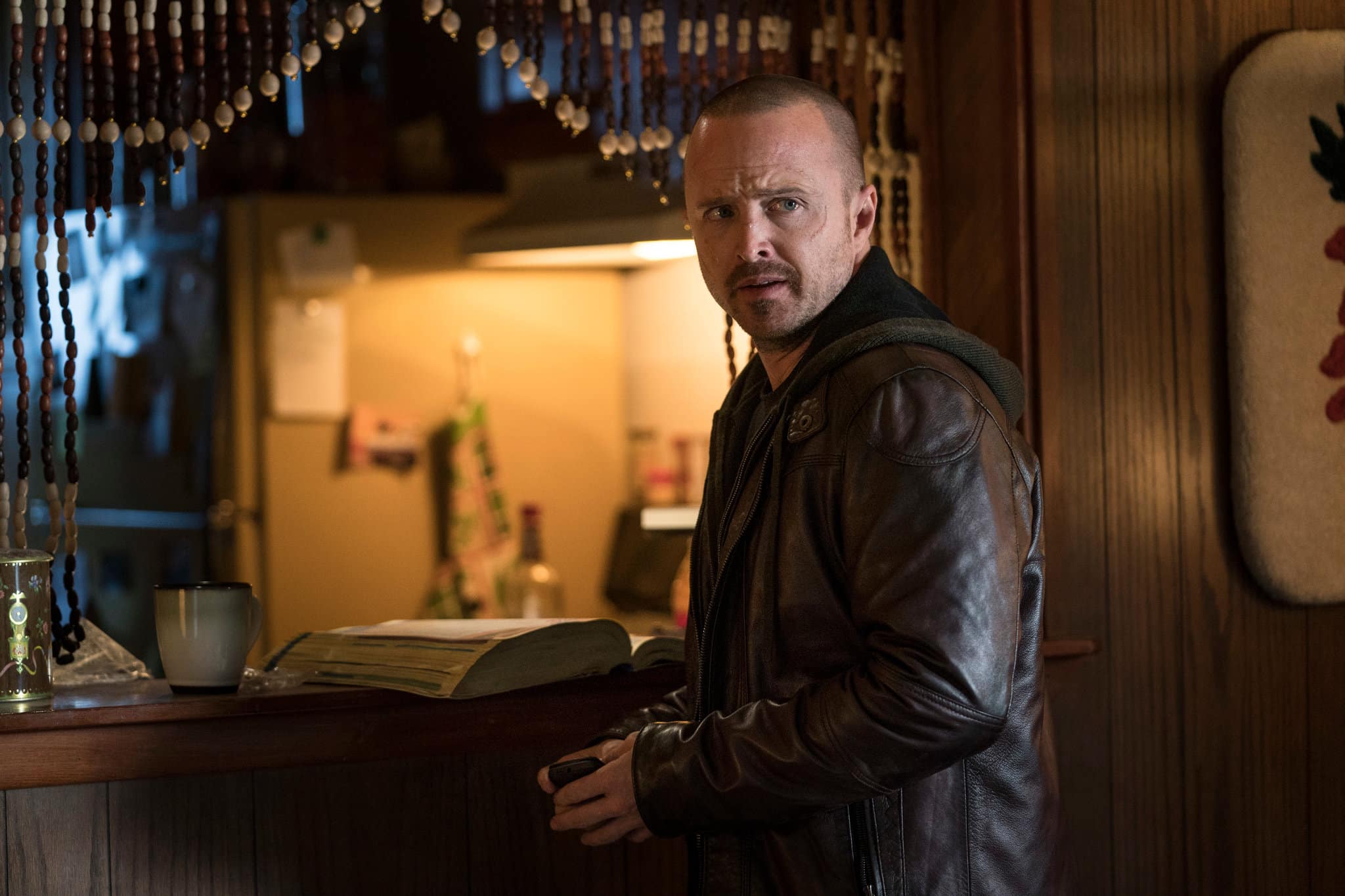 There is a perverse sense of karmic justice at play in El Camino. Through flashbacks, the audience is reminded of the suffering that Jesse endured at the hands of the white supremacists. He carries the scars on his face and on his body, visible when he lifts his shirt to demonstrate that he’s not wearing a wire. As in the final season of Breaking Bad, Jesse’s basic decency is contrasted with the glib (and often creepily childlike) amorality of his captor’s young nephew, Todd Alquist (Jesse Plemons).

While Jesse has suffered, El Camino makes it clear that he still has debts to repay. He begs local vacuum salesman Ed Galbraith (Robert Forster) to help him disappear, sharing his sad story. “If you believe that you can pull on people’s heartstrings, you should take your chances with the police,” Galbraith responds. “From where I sit, you made your own luck, as did your former partner, as did your lawyer.” Instead, Galbraith — a man of his word — insists on Jesse paying his debts.

This is similar to how the final episodes of Better Call Saul treat Jimmy McGill. McGill uses Galbraith to disappear at the end of Breaking Bad, and so he is the rare character to avoid any truly meaningful consequences for his choices. The closing stretch of Better Call Saul makes it clear that Jimmy has learned nothing, because it didn’t cost him anything substantial. Resettled in Nebraska under the alias of “Gene Takovic,” Jimmy falls back into his old scams, with recklessness leading to his arrest.

Jimmy’s arc runs parallel to that of his ex-wife, Kim Wexler (Rhea Seehorn). Horrified following the murder of their old mutual associate Howard Hamlin (Patrick Fabian), Kim flees to Florida and disappears into a quiet and modest life. While this contrasts with Jimmy’s refusal to confront Howard’s death, it isn’t an act of redemption. As Seehorn describes it, it is the result of “a lot of self-loathing, and a lot of desperation.” Kim’s redemption comes later, prompted by a call from “Gene.” 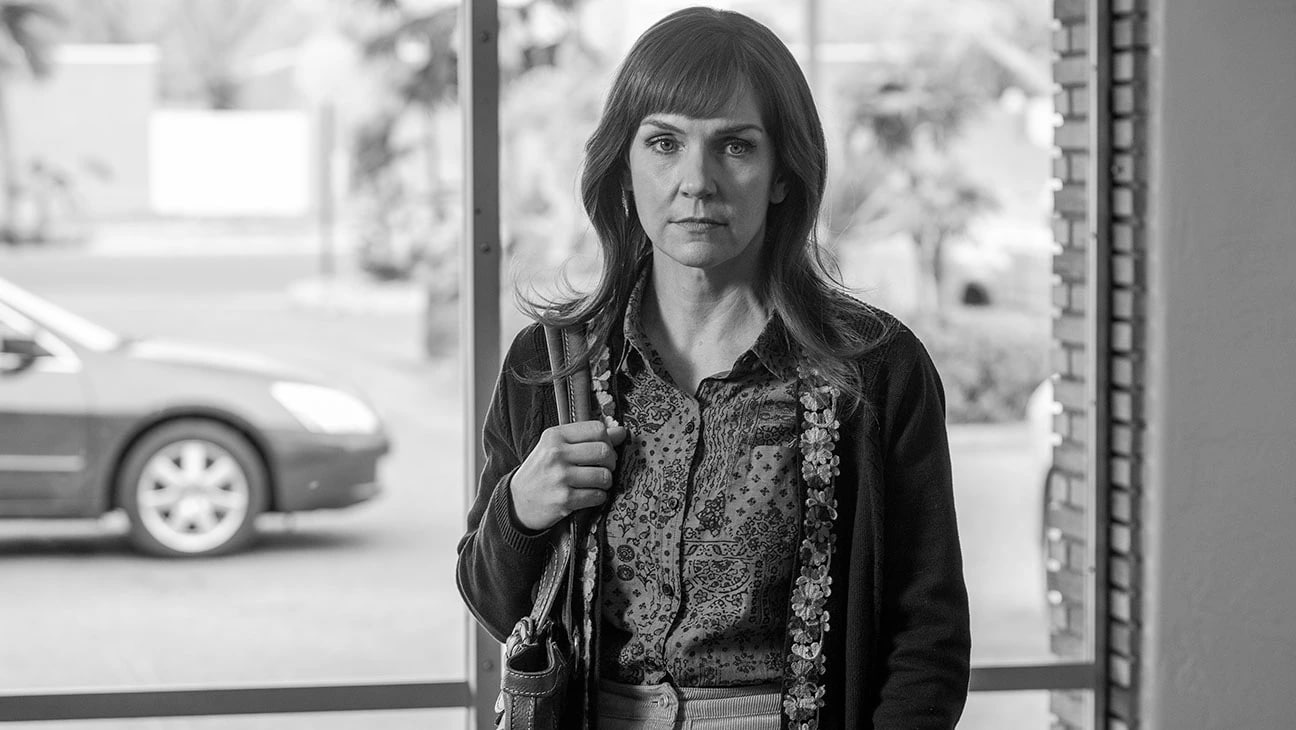 When Kim suggests that Jimmy turn himself in, he sarcastically goads her to do the same. Kim responds by traveling back to Albuquerque. She confesses her complicity in Howard’s death to both law enforcement and to Howard’s widow, Cheryl (Sandrine Holt). It is an ordeal, but it is also cathartic. Kim breaks down on her journey home, as if a weight has been lifted. In “Saul Gone,” Kim volunteers at a free legal aid clinic, suggesting a return to the legal career she abandoned after Howard’s death.

There is a sense that healing might begin and that she can get her life back on track. “Hopefully, the audience can put two and two together and realize that she’s not going to be satisfied with just answering the phones in that office for very long,” Gould explained of the scene. Gould seems to believe that there is hope for Kim, “I think redemption’s a big word, but I think she’s trying to make up for the things that she’s done wrong and trying to live differently.”

When Jimmy is arrested, he is brazen and unapologetic. When his co-counsel Bill Oakley (Peter Diseth) asks how he expects the prosecution to play out, Jimmy responds, “Where do I see this ending? With me on top, like always.” Jimmy is shrewd enough to negotiate the prosecution down from an initial offer of 30 years to a more modest sentence of seven-and-a-half years. At a certain point, Oakley asks Jimmy, “What more are you going to get? What’s left?”

Ultimately, on hearing of Kim’s acceptance of the consequences of her actions, Jimmy is moved to make his only public confession. He tears up his deal. “I was more than a willing participant,” Jimmy admits of his involvement in Walter’s drug empire. “Walter White couldn’t have done it without me.” However, he pushes further and accepts his own culpability in the suicide of his brother Chuck (Michael McKean). The black-and-white cinematography matches the black-and-white morality. 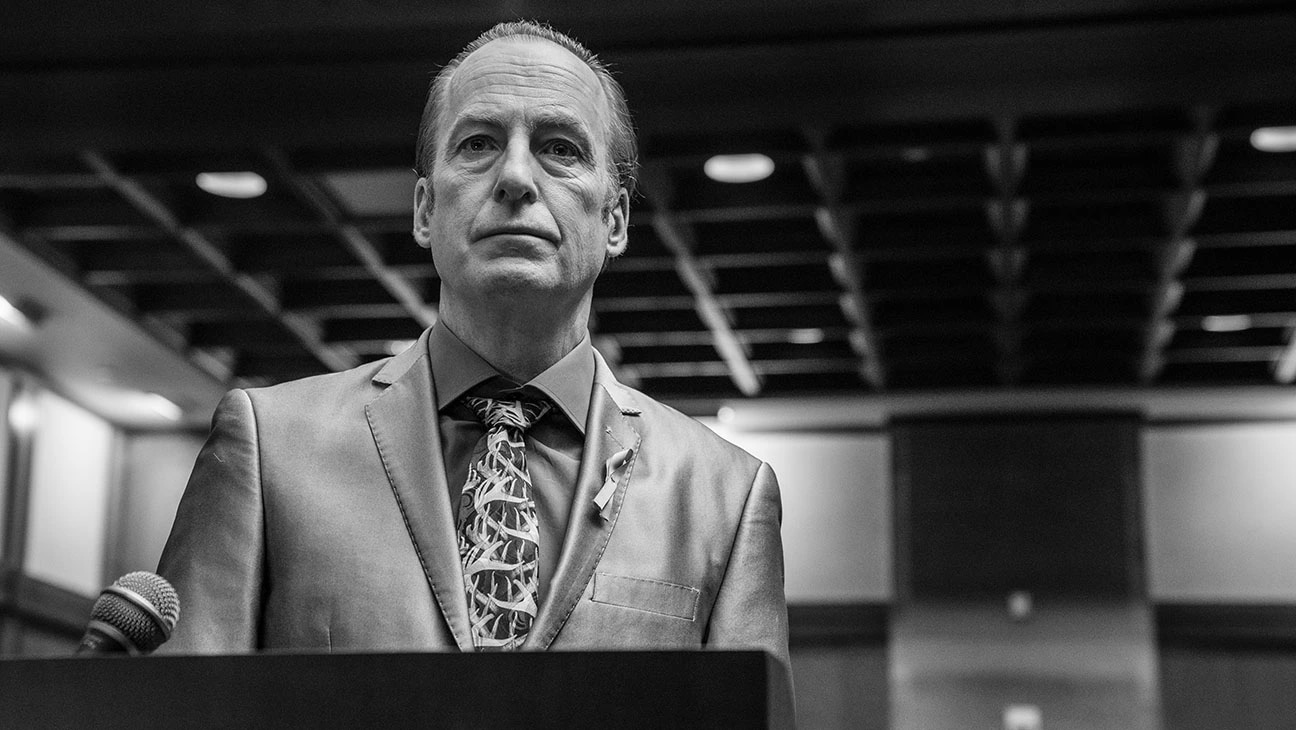 “I tried,” he admits. “I could have tried harder. I should have.” He makes it explicit that it wasn’t the scam in “Chicanery” that crossed a line, as Jimmy and Kim fought Chuck’s attempts to disbar his younger brother, but his spiteful decision to get Chuck’s malpractice insurance revoked in “Expenses.” Once again, it’s a moral transgression that matters more than a legal one. “That thing with your brother wasn’t even a crime,” Oakley protests. Jimmy responds, “Yes it was.” Like Kim, Jimmy takes responsibility in the way that Walter never could.

Both El Camino and “Saul Gone” return to the idea that the past cannot be changed and that people have to live with their decisions. Talking about Walter’s influence, Mike advises Jesse, “Only you can decide what’s best for you, Jesse. Not him, not me.” Mike suggests Alaska to Jesse, “Up there you could be anything you want.” When Jesse seizes on the possibility to “start over, start fresh” and “put things right,” Mike sternly warns him, “No. Sorry, kid, that’s the one thing you can never do.”

Both stories end with their protagonists in snowy surroundings that contrast nicely with the Albuquerque desert. Jesse escapes to Alaska, while Jimmy ends up with 87 years in ADX Montrose, “the Alcatraz of the Rockies.” Perhaps the snow is a blank canvas. The characters can’t rewrite their pasts, but they can reshape their futures. They cannot take back their mistakes but can make new choices. There is a warm humanism in this, one which contrasts nicely with the brutality of Breaking Bad.

“The hopeful potential for Better Call Saul is that it doesn’t necessarily have to end as sad or as badly as Breaking Bad did, for the main character and his family,” Gilligan mused in August 2017. “There is a possibility for some sort of redemptive moment.” That’s true. “I don’t know if he’s redeemable,” Gould mused of Jimmy after the finale. “But he’s got his soul back. And Kim has her agency back. And that’s pretty cool.” In the end, there is at least the hope of redemption.