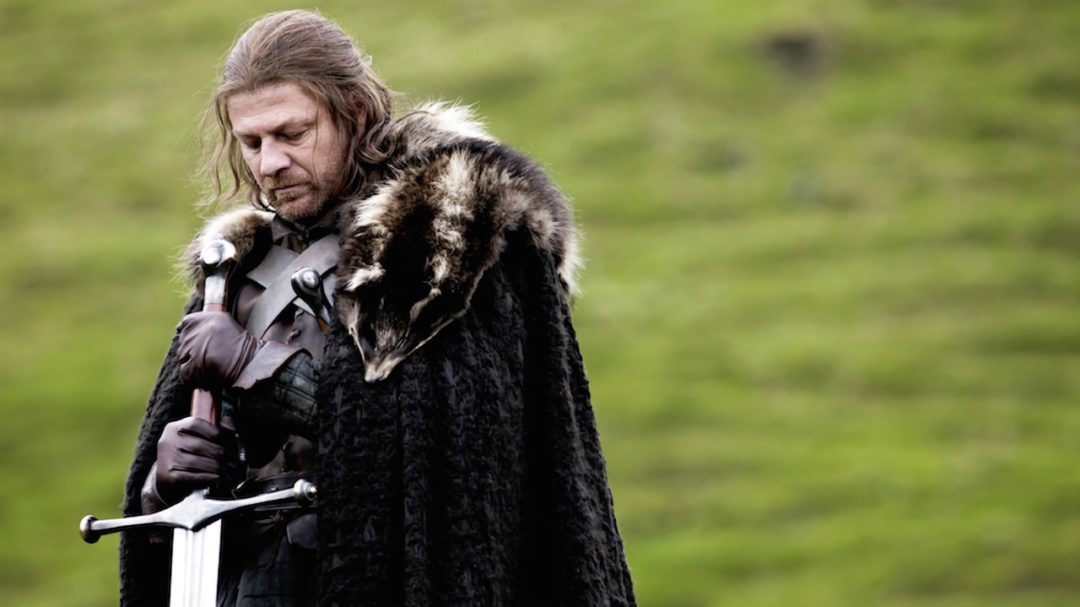 When the snows fall and the white winds blow, the lone wolf dies, but the pack survives.

The lion doesn’t concern himself with the opinions of the sheep.

HBO’s Game of Thrones is a show about how children inherit the legacy of their fathers. A good leader is like a good parent and the ideal family is a model for the ideal kingdom. This is why the series will end with the Starks triumphing over the Lannisters.

The conflict between house Stark and Lannister is as much a military conflict over the Seven Kingdoms as it is a philosophical struggle between two different ways of relating to others. The Stark and Lannister way are defined by the examples set by their house patriarchs, Ned Stark and Tywin Lannister, and the lessons their children learned. While Tywin Lannisters egotistic parenting doomed his kids to lose the Game of Thrones, Ned Stark’s parenting set his kids up to win. Despite all the fantasy tropes Game of Thrones subverts, it follows the mold of most myths by showing that in a chaotic world where suffering is inevitable, it’s better to die loved and honored like the Starks than to live feared and hated like the Lannisters.

Tywin cemented his legacy as a Machiavellian genius at the Red Wedding, where he orchestrated the betrayal and murder of Robb and Catelyn Stark. Tywin violated a sacred ancestral custom shared throughout Westeros, but thought that action was justified since he was ending a war and protecting his family. As Tywin tells his son Jaime, “It’s the family name that lives on. It’s all that lives on. Not your personal glory, not your honor, but family.” Tywin’s uncompromising willingness to do whatever it takes to make his family succeed is what his supporters admire about him.

However, Tywin doesn’t practice what he preaches. When you examine his conduct, it becomes clear that he failed by his own standards. Tywin is unwilling or unable to relate to others desires. He prefers to resolve conflict through fear and raw power alone, and always puts himself first instead of his family. He dooms all who follow him.

Tywin relies on instilling terror as a parent and leader, even when diplomacy is possible. Consider his response when the 16-year-old Tyrion eloped with the prostitute Tysha. Tywin could have explained to his son the foolishness of marrying poorly in a world where weddings customarily cement alliances between powerful families. Instead, he forced Tyrion to watch all the Lannister soldiers rape Tysha. It is one thing to refuse to negotiate with your enemies; it is another thing to terrorize your own family.

Tywin also rarely reconciles the desires of his children and subordinates when devising long term goals. As a result, Tywin’s  family and subordinates resent him and each other. Tywin is inflexible. He uses fear and raw power to puts himself ahead of everyone else, and through this example encourages all of his subordinates to do the same. Whether you’re one of his children or vassals, learning from Tywin requires you to undermine him. There is little room for compromise in the Lannister family. Escalating violence or threatening it is the primary way to resolve all conflicts. It’s no accident that Tywin died at the hands of his own child. He was always going to be betrayed by his family because he treats his own family like terrorists he can’t negotiate with.

Tywin’s first and last scenes in Game of Thrones’ season four finale emphasize the self destructive inflexibility of the Lannister way. In both scenes, he bosses his kids around and ignores their desires, even their desire to kill him and threaten his plans. In the first scene, Tywin orders Cersei to marry Loras Tyrell. She refuses and threatens to reveal her incestous relationship with Jaime to the world. Tywin refuses to believe she loves Jaime or would betray him. Cersei doesn’t get to betray Tywin, only because Tyrion kills him first.

In Tywin’s last scene, he learns that Tyrion has escaped his cell and killed the prostitute Shae in his bed. Tyrion is preparing to kill him, so Tywin clumsily orders him to stop. When Tyrion threatens to kill Tywin if he belittles Shae, Tywin ignores him. He refuses to believe Tyrion could love a whore or kill him, so he goads Tyrion until he actually pulls the trigger of his crossbow. In both scenes, Tywin doesn’t realize he lacks the power to strongarm his opposition without risking his life and legacy. Tywin believes he’s a tactical genius, but he’s actually a tyrannical fool. Because his allies never had a reason to work with him beyond fear, his death inspires opportunism rather than loyalty. Followers of the Lannister way require preternatural luck, because their naive, inflexible, and self-undermining conduct alienates everyone.

Like Tywin, Ned Stark is often misunderstood by his supporters. Ned’s oldest and closest friend Robert Baratheon called him an “honorable fool,” but he’s more than that. His honor is different from white knight, Lancelot archetypes like Brienne of Tarth or Barristan Selmy. We see Ned kill an unarmed, surprised, and wounded Ser Arthur Dayne at the Tower of Joy. Ned doesn’t even try to make the fight fair. He didn’t pout or call off the battle until his foe recovered. Dayne threatened Ned’s family, and so Ned slew him. Ned earns honor by protecting and empowering his pack, not by making romantic gestures, holding suicidal ideals, or attaining personal glory.

Ned is comfortable appearing dishonorable, even to his own family, if it will actually help them. Ned passed Jon off as his bastard rather than admitting he’s a Targaryen because he valued protecting his family more than absolute honesty and a spotless reputation, even with his wife Catelyn. For the same reasons, Ned falsely claimed to have ordered Catelyn to arrest Tyrion, lied to Robert on his deathbed, forged Robert’s will, tried to bribe the Gold Cloaks, and perjured himself at the Great Sept of Baelor. Honesty, personal glory, and abstract honor mean nothing to Ned compared to empowering his family and protecting them from harm.

All of Ned’s “bad” behavior follows this rule, he acts to protect and empower his family. Ned Stark went to King’s Landing to protect his family, and he died in King’s Landing protecting his family. His death is blamed on his inflexible sense of honor, but Ned’s code of conduct and parenting show that his sense of propriety is in fact flexible. He isn’t committed to abstract, rigid principles but to reconciling the dynamic needs of his family and allies in a chaotic and ever-changing kingdom. When Ned’s family discovers baby direwolves, Ned says that the animals should be executed. But Jon challenges Ned and suggests he give them to his children. Ned agrees, but only if his children treat them like a duty and responsibility rather than unearned gifts: “You will train them yourselves. You will feed them yourselves. And if they die, you will bury them yourselves,” he says. Ned will satisfy his  childrens and subordinates’ desires, but only in a way that reconciles their desires with duties that will empower the whole family.

Another excellent example of Ned’s dynamic parenting and leadership style happens on the journey to King’s Landing. At the time, Arya resented her sister Sansa but Ned taught his younger daughter to see things from her sister’s perspective. He also empowers Arya to serve the family in her own way by teaching her to fight. Swords, like direwolves, aren’t toys. If Arya wants to own a sword, she will learn to use it responsibly. Ned’s own conduct mirrors the lecture he gives Arya. He leads and parents by example. Only after learning how Arya sees things herself does he encourage her to see things like her sister. Ned skillfully performs the context-sensitive balancing act which defines excellent parenting and leadership.

Ned will not coddle Arya and hide her from danger, like his wife Catelyn wished to do for Bran. He also doesn’t ignore growing conflicts between his subordinates like Robert did when determining the fate of Sansa’s direwolf. Ned responds to the dynamic needs of the moment and finds mutually satisfying ways to empower his family and the North. Ned is too clever to rely on fear and raw power alone. Through his own conduct, Ned taught his children to see things from others’ eyes and work to find mutually desirable goals.

That Ned’s enemies are unable to recognize the strength and utility in his pragmatism reflects their own myopic view of honor. Ned’s reputation as an “honorable fool” aids his family long after his death. Ned may have been unlucky when dealing with Littlefinger’s schemes, but as a rule he’s more dangerous and pragmatic than he’s often given credit for.

In the season seven finale, a lovely conversation between Arya and Sansa highlights the difference between the Stark and Lannister ways of  playing the Game of Thrones. The sisters reconcile their differences, with Arya admitting, “I was never going to be as good a lady as you, so I had to be something else.” The scene ends with the sisters acknowledging each other’s strengths, and remembering how their father taught them to work together. They miss him. Compare that to other scenes in the same episode where Cersei threatens to kill both of her brothers because, like Tywin, she is incapable of compromising. Invoking Tywin’s paranoia, Cersei insists that Tyrion only wants the Lannister family dead, and refuses to help him. When Cersei decides to betray the alliance against the White Walkers, Jaime finds her so repulsively self-serving he abandons her, risking death at her hands. Cersei explicitly states she’s just doing what Tywin would do, and what Jaime would do too had he learned his father’s lessons better.

Ned and Tywin’s lives were lessons to their children. On the eve of the final season, the Starks are a united family, empowered by trusted allies like the Free Folk, the Vale, and Daenerys. By contrast, Cersei Lannister is alone. Her daughter and both her sons are dead. Both her brothers now support the Starks. Cersei’s allies are opportunistic strangers she’s bribed. While the Lannisters were incapable of uniting, the Starks found trusted allies, even among former enemies.

The Starks’ and Lannisters’ lives are lessons for us. Game of Thrones teaches that fate can and will take everything from us. Our best defense lies in our personal character and skill at creating mutually beneficial relationships. There is no way to avoid tragedy, suffering, and chaos. Still, some ways of living guarantee more tragedy, inspire more chaos, and ensure unnecessary suffering. The choice is ours. When the ease of summer ends and the winds of winter come, do you want to be a Lannister or a Stark? When you die, do you want to inspire your loved ones like Tywin or Ned? Valar Morghulis.