Sheldon returns to the fold and new dynamics among the friends and lovers are introduced.

After the long summer hiatus, The Big Bang Theory is back in a temporary timeslot, running Monday at 8pm on CBS (moving back to Thursdays after sportsball ends). This week’s return was billed as a 1 hour premiere, but it was really two separate, stand alone episodes. The first episode spends all of its time getting things back to status quo after May’s season finale events, but the second episode does what this show really does best: finding new ways to explore the long-standing relationships among the characters.

When last we left our nerdy friends before summer began, Raj was finally in a healthy relationship with someone other than his dog, Howard & Bernadette (Howardette? Bernard?) were exploring the idea of having children and Penny & Leonard were engaged (for realsies this time, yo). Leonard told Sheldon that they will not be roommates soon since Leonard is moving in with Penny and Sheldon got another shocker when the university he works at wouldn’t allow him to change his field of study away from string theory. Rather than face all of this inevitable change in his life, he ran away (in grand BBT season finale tradition) to ride the rails of America.

Sheldon’s dilemma is the primary focus of the first episode, The Locomotion Interruption. Having been (unsurprisingly) robbed while taking a train ride across America, Sheldon calls Leonard to pick him up at the police station in Arizona. Amy joins Leonard on the 6-hour drive there and makes it clear how unhappy she is that Sheldon didn’t call her. On the drive back to Pasadena, she tells Sheldon as well who admits that he was ashamed for her to see him fail at anything. This melts her heart and she tells him that it’s ok that he is not perfect… which makes him immediately want to break up with her.

A lot of this storyline was the standard beats of Sheldon being clueless in the real world and impossibly difficult with everyone he comes in contact with. There wasn’t a lot new material here except getting Sheldon back into town. His relationship with Amy didn’t advance any and Leonard continues to act as the hapless caretaker to Sheldon’s man-child ways. Sheldon did have some great lines in the police station though including pointing out to the detective that Sherlock Holmes would use cocaine to enhance his crime solving abilities, but the detective’s potato chips were certain have the same effect.

In the second storyline, Penny is nervous about the interview Bernadette got her for the pharmaceutical rep job. Penny, being entirely unqualified, bombs the interview, but mentions Bernadette’s temper which gets the interviewer going about how scared he is of her as well. He then decides to hire Penny to keep Bernadette happy. I think it’s great they are getting Penny away from the longstanding Bad Waitress/Failed Actress jokes, but I’m sure they are just setting her up as Bad Saleswoman. As for Bernadette, let’s face it, she is funniest when she is feral and they play to that perfectly in this episode (and the next). 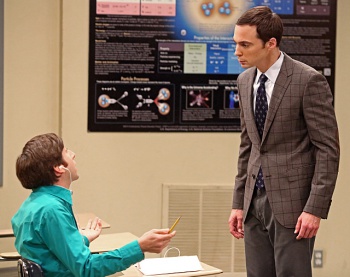 The third storyline of the first episode touched on Howard’s growing unease about his mother’s close relationship with Stuart. After Stuart’s comic book store burned down last season, he was staying at Howard’s mom’s place until he could get back on his feet. But Debbi (yes, she has a name now, though still not a face) has been injured in a treadmill accident so Stuart has decided to stay to help her out and the two get along a little too well for Howard’s taste. Irritated that he isn’t the favorite son any more, Howard finally confronts Stuart treating him as a son forbidding him from seeing his mother. Stuart refuses to stop seeing Debbi (Stuart: “You can’t tell me what to do…Dad.”) and stomps off.

This storyline ends without any real resolution and is entirely ignored in the following episode, but I’ll give the writers credit for finding a creative way to keep Stuart and Howard’s mom in the picture in a way that creates an awkward situation for Howard.

I’ll also give them credit for cleverly acknowledging Penny’s radically short haircut. Yes, it matters to many of the fans when one of their favorites has a new look. Felicity, anyone? In this case, Sheldon who has been struggling with change sees her for the first time at the end of the episode, can’t handle one more radical difference in his life and walks out.

The second episode of the new season, The Junior Professor Solution, is where the series really shines. It mines both the core conflict of the Sheldon/Howard friendship as well as makes full use of Amy’s repressed emotions when she finds herself in the middle of a spat between Penny and Bernadette in the best way possible.

The university where Sheldon works has a solution to their inability to change his research focus due to grant funding restrictions: make him a junior professor which will allow him to study whatever he likes. Of course, the idea of Sheldon teaching is appalling and apparently the student body agrees; no one signs up for his class on physics. Feeling bad for him, Howard agrees to take his class as he is interested in pursuing his doctorate, but Sheldon doesn’t believe, as we’ve long known, that Howard is smart enough. But when Howard answers Sheldon’s rapid fire questions on physics, he agrees to teach Wolowitz as a student. Of course, Sheldon is really only doing this in an attempt to show Howard how little he really knows and Leonard has to point out that Sheldon is acting not out of superiority, but insecurity. 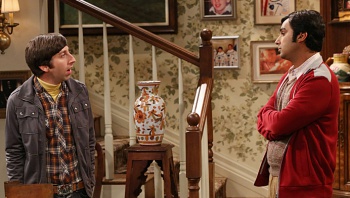 As expected, it doesn’t go well and Howard responds to Sheldon’s condescension by shooting a spit ball into Sheldon’s mouth. Sheldon reports him to HR, Howard drops the class and confronts Sheldon, proudly stating that engineering is just as prestigious as physics. The very idea appalls Sheldon so Howard sets out to prove it by asking Sheldon a number of engineering questions.

This is where this funny and promising storyline falls apart for me. Will Howard stump Sheldon and force him to admit that he doesn’t know everything? Will Sheldon have all the answers and keep Howard under his intellectual thumb for years to come? We’ll never know because when it appears Howard has stumped Sheldon, in reality Sheldon’s shocked expression is not from being unable to answer, but from coughing up the spitball that has been lodged in his throat all day. I would have preferred to find out if Sheldon knew the answer or was really stumped. But I did enjoy the writers focusing on this part of Howard and Sheldon’s friendship that has been a little more than a running joke up until this point.

The Penny/Bernadette tension continues and Amy is the happy recipient of their separate attentions. Now that Penny has the pharmaceutical rep gig, Bernadette pressures her to prep for the first day so her own reputation doesn’t suffer. Penny can’t handle the constant nagging and doesn’t invite Bernadette to a lunch with Amy. Amy quickly realizes that she can bond with Penny by joining in on complaining about Bernadette’s behavior. And when Bernadette calls to complain about Penny, Amy quickly switches sides and starts bagging on Penny. It doesn’t take long for all this bonding to go to her head and when Sheldon ignores her, she warns him that he better pay attention since he is “dating the popular girl” now. Unfortunately for Amy, her newfound status is short lived as Penny and Bernadette make up, but Mayim Bialik used the time to shine as the nerdy girl who instantly became the mean girl when given the chance to be popular.

Bottom Line: These first two episodes show promise of some new dynamics to move the show forward, which it will need as it has been renewed for three more seasons. The writing and acting is still sharp, though the resolution to the story lines could be stronger. Raj has been underserved so far, but we are only two episodes in and they did give him some great lines in the scene where Howard discovered Stuart is still staying at Debbi’s. I’m looking forward to rest of the season as I’ve already seen the reruns about 10 times each on TBS over the summer and am ready for some new material.

Recommendation: If you’ve been missing BBT this summer, season 8 looks like it has more to love.