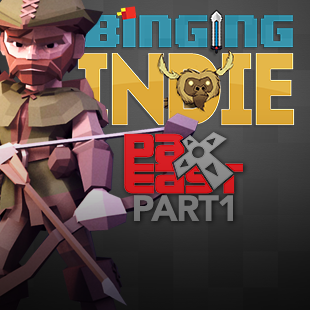 Editor’s Note: This is the first of a three-part series on indie games from PAX East. Stay tuned for the next two installments in the next two days.

Here’s part one of our PAX East Binging Indie special!

The lower half of the screen is the table where the Dungeon Master and the group are playing the pen and paper game, while the upper half is the action or what is going on in the minds of the players. It’s a unique concept that works incredibly well.

In an update to Galaxy, the group is playing online with video chat, so it’s easy to imagine the gang streaming the adventure on Twitch.

I was able to demo the game for about a half hour, and in that time, I was bombarded with all kinds of references from Star Wars to Star Trek. The quests chain together, which works great for a few battles killing time or marathon sessions. The team knows how to make their games fun and engaging whether you play it for a few minutes or a few hours.

Much like Knights, Galaxy is wearing its love of tabletop RPGs proudly. The DM reminds the players to stay in character and other quips you would hear at almost any D&D game session.

The Church in the Darkness – Paranoid Productions

I love seeing a new concept for a game, which is why The Church in the Darkness immediately caught my attention. The game takes place in the 70s, and you have to infiltrate a religious cult to rescue a family member who has been indoctrinated. You play an ex-law enforcement officer going undercover to find your nephew.

Making your way to Freedom Town, a village set in a remote part of South Africa, you discover things aren’t quite as black and white as you thought they would be.

The game has a mix of action and stealth, but it does veer more towards the action side. The story changes every time you play, so you never know what to expect from the cultists. Sneaking through the village brings to mind events like Jonestown, which has me wondering if one of the endings to the game will have similarly gruesome results.

The game is set to be released later in the year on Steam, PS4, and Xbox One.

For the King – Iron Oak

For the King is a mix of tactics, strategy, JRPG, and roguelike with board game mechanics. With its hex based maps, you immediately can see its board game roots.

You play as a group who must travel the lands trying to solve the mystery of who murdered the King. The game is playable solo or co-op. There are different classes to pick, like Blacksmith and Hunter, with more to be unlocked as you progress.

The game is a roguelike, so it’s never smart to rush headlong into combat, or you will most likely have to start over again from the beginning. While it is somewhat unforgiving, it doesn’t feel outright unfair. It’s still in beta, so I’m sure the difficulty is something that will be tweaked over time.

While playing the game at PAX, my team aggressively went after a much higher level bear, and we paid the price. While it’s best to avoid stupid mistakes, sometimes you need to test your limits!

The game is currently in early access on Steam.

I’ve had my eye on this since I saw it on Steam Greenlight about 2 years ago. A riot simulator that isn’t State of Emergency? Yes!

The game uses real events as the scenarios, and you play as either the protesters or the police at each level. The gameplay comes down to a sort of reverse tug of war. You have to push the opposition off the other side of the map.

You can do this as peacefully or as violently as you want, but the actions you do will have repercussions on future scenarios. For example, if the protesters are too violent in one map, the next time there will be more police, and they will not hesitate to crack some skulls.

The game will be released on Steam sometime in 2017.

In Beat Cop, you play a former detective that’s been demoted to being a beat cop in 1980’s New York. Corruption abounds, and you have to uncover why you’ve been framed for murder while simultaneously giving out parking tickets.

With homages to everything from Dirty Harry and the Dukes of Hazzard, the game is filled with 70s-80s nostalgia. The story is non-linear and has multiple endings, many of which are not happy ones.

From what I’ve played, it has a heavy emphasis on story and making you feel like you are in the middle of a cop drama. While I’m still waiting for a game based on Cop Rock, this should hold me over in the meantime.