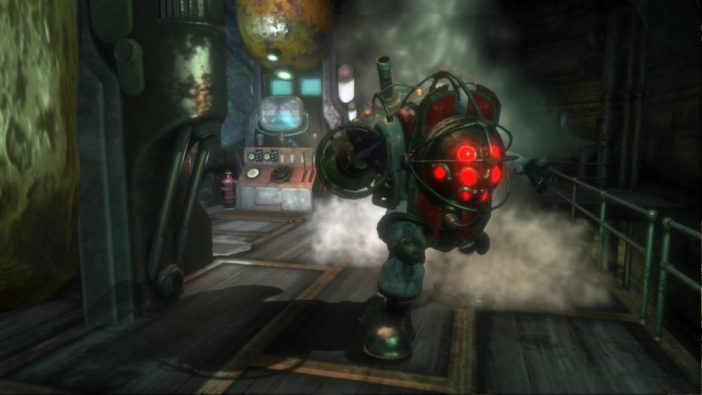 My Rapture is not at the bottom of the sea as it is in BioShock. My Rapture is a used car lot hocking old Toyotas and Chryslers, my power granting Adam a sale.

Picture it all: Illinois Octobers generally aren’t known for their oppressive heat, but the sun didn’t get that memo. The time was near noon and our blinding star was high above in a cloudless sky. Shade was minimal. My home state of Iowa had remarkable, picturesque roving hills full of bur oak and silver maple trees, but northern Illinois is flat, pockmarked with waves of corn and the deteriorating barns standing watch over them. It’s a great location for a car dealership.

I had been working as a car salesman for three weeks. My record: zero cars sold. I was getting desperate. Working 11-hour shifts at least five days a week yielded nothing. My flat farmland car overlords would come to see me as a liability. If I didn’t deliver soon, I’d be unemployed.

My mentor found my sales tactics amusing. “Skippie, you’ve become a Lot Lizard!” he’d regularly scold me in a thick Chicago accent. For the first two weeks, I was tied to his hip, shadowing him as I learned the difference between a Dodge Charger and a Challenger. In between rants on why poppy seed hot dog buns are antithetic to a proper Chicago dog, he’d give me great advice about how customers should be treated like puppies that are in fact walking paychecks.

He told me to view human beings in a terrible way, but damn did I miss him when he cut me loose. Alone, outside in the heat, I couldn’t hide my failing salesmanship by being a shadow. I spotted a delectable family of four paychecks on the lot inspecting a newish 2013 Honda Odyssey and proceeded to welcome them to the dealership while imagining my mentor cracking his usual joke: “Oh look, another victim.”

It was all very BioShock.

Irrational Games’ 2007 opus, which is still one of my favorite games, openly criticizes the inherent avarice at the heart of both capitalism and objectivism, which are both also  prevalent in the automotive business. Rapture, the underwater city where BioShock takes place, was built on libertarian ideals. Free enterprise is the law of the land, the divine right of kings swapped for the divine right of cash.

Rapture was founded by Andrew Ryan, who dreamed of a paradise where no government or regulatory body could restrict a person’s ambition and ability to profit from it. As a result, Rapture’s citizens accomplished extraordinary feats in construction, surgery, art, and even genetic mutation … at a price. The society’s ability to profit from innovation without restraint was untenable due to consumers becoming unhealthily dependent on addictive products. Nothing prevented Ryan and other business owners from exploiting Rapture’s citizens until the city crashed.

Years after Rapture’s systemic failure, you explore the leaky ruins and uncover horrifying secrets like how the city runs on child labor and how the remaining citizens survive by injecting superpower-granting drugs. BioShock gives you a choice of how to play as well as how to participate in the story.

This “choice,” however, is an illusion. BioShock knows that, as in car sales, it is important to shower consumers with an abundance of options but they are only the choices you want to give them. You don’t ask a customer “What color vehicle do you want?” because your dealership might not have a car in that particular color. Instead, you ask something akin to “Do you prefer lighter colors or darker colors?” It’s a slight twist of words, but using these linguistic tricks on unsuspecting customers works wonders.

BioShock is built on similar misdirection. While the game definitely gives you options for how to best vanquish your foes and explore the environment, your character is inevitably revealed to be under hypnosis, a would-be Manchurian Candidate controlled by a non-threatening phrase. Saying “Would you kindly?” forces him, and by extension you, to obey every command given as if he was a loyal hound.

Car salesmen employ their own “Would you kindly?” spells. After test drives, the most effective way to convince customers to follow salespeople into a dealership is to immediately get out of the car and politely declare “Follow me so I can get more information on your vehicle.” Of course, the information the customers receives is on pricing and financing.

I felt as guilty exploiting a customer’s good nature as I would have harvesting ADAM from Rapture’s doomed children. My brief stint attempting and failing to manipulate people ravaged my soul until I was fired. Even though I was earning a pittance from a stipend, the job it still paid the bills. Much like BioShock’s protagonist, I had to work within the system to survive. While he had to commit horrific acts of physical violence to survive the game’s world, I had to commit acts of psychological violence to survive in a cutthroat economic system.

Andrew Ryan’s mantra was “A man chooses. A slave obeys.” But the fact of the matter is that we’re all slaves when dollars are involved.