Impressions pieces, because they often represent only about an hour or two of gameplay and about a half hour (about the total length of time a writer can stand to be away from a new game) of writing time, generally fall into two categories: the love fest and the trash piece.

This is because most games will generally tell you all you need to know about them in the first few minutes. It’s either brilliantly conceived and can therefore do no wrong on that glorious first day it’s in your hands, shiny new and still smelling like the inside of a new Buick; or it’s deeply, deeply flawed and playing it is keeping you from doing something more fun, like cleaning the bathroom.

Generally, most games will even out somewhere along the 10-hour mark, and a great game will mellow to simply “good” and a horrible game will develop some enduring trait, raising it’s mark to something along the lines of “mostly bad.” Rarely will they remain at the polarized extremes presented in the first few hurried hours of play. 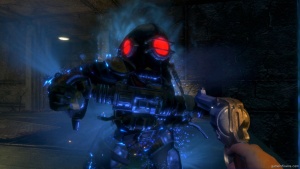 I’ve just played four hours of BioShock, and I can say one thing for sure about it: It still smells like a new Buick. In a cunning move on the part of developer Irrational, they allowed me to play the first half hour or so at this year’s E3 event, which meant that as soon as I fired up the game this afternoon, I already knew how to play and how to survive those first few encounters. So I had a little bit of breathing room to sit back, try new things and take in the spectacle of it all, and make no mistake, if any game from the past couple of years could be called a spectacle, BioShock is it.

The game opens, literally, with a bang – your airplane crashes – and you find yourself immersed in the world of Rapture before you even know who you are and of what you’re capable. This, like so much else about BioShock is a stroke of genius. Regardless of whatever preconceptions you bring with you into the game, your character is a blank slate. You’re not a space marine sent to eradicate evil. In fact, in the murky world of Rapture, it’s hard to tell exactly what evil is. Rapture is a ruined monument to man’s indomitable spirit; around every corner are examples of man’s hubris, scenes from the fall after the pride.

It’s also one hell of an action game. The enemies are smart, sneaking around corners to surprise you, running to heal themselves and lobbing grenades when you duck under cover. You can outsmart them, by setting traps in doorways, lighting fire to a pool of oil or drawing them to water, then electrocuting them, but it feels like you’re outsmarting them and not simply taking advantage of bad coding; surviving, not hacking. And speaking of hacking, you can do that, too. Gun turrets, robots, safes and vending machines can all be hacked if you don’t mind the pipe-fitting mini-game. If you do mind, you can pay the price in money or blood, but for those who’d rather use their minds, the hacking game is a nice touch. It reminds me of a game called 2010 for the Colecovision. But in Bioshock it’s more fun, and actually has a point.

But above all else, Bioshock is a wonder to behold. As I found myself at the game’s beginning, having been born of fire from the world of the ordinary, birthed onto the rocky shore of the small island housing the entrance to Rapture, I took a moment to stare back into the flames of my conveyance. The sight was breathtakingly beautiful. From the full moon, gently clouded over, to the flaming jet fuel across the surface of the sea, to the graceful tail of the aircraft sliding slowly under the waves, each detail was rendered with the kind of loving care reserved for the portrait of a loved one. I took a good, long look, knowing what lay ahead, knowing this would be the last glimpse of sky I’d see for sometime, perhaps ever. And then I swam around the circumference of the tiny island looking for secret loot. 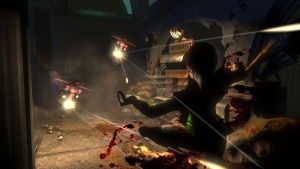 And that’s basically how the next few hours played out, scrounging for treasure underneath staircases and behind boxes, between staring open-mouthed at sights I’d never expected to be rendered in a videogame. Case in point: a moment about halfway through one of the first scenes of the game (and make no mistake, levels in BioShock are scenes, crafted as carefully as any film, yet wide open to exploration and divergent methods of play). As I entered a new room, a cascade of water fell from the ceiling, raining down like a curtain over a small doorway. The light from a nearby sign caught the curtain of water, turning it red, as if it were blood, not sea water, obscuring the path. Passing through the water, after the film of it ran over my face, and my vision cleared, I looked back and saw that it was just water after all. The change in direction changed the angle at which it was hit by the light, just as it would in real life. But by then I was in danger, the enemy inhabiting the room had awoken, and the foreshadowing, lost in my wonder, became clear.

I stopped taking notes about a third of the way through my play session, and it’s a good thing. The few hours I’ve put in are already full of moments like this, and hold the promise of more. I’m taking my sweet time playing the game, exploring every nook and cranny, taking advantage of the optional hint system, and interacting with everything. This is the sort of game I like to relish, playing it at a snail’s pace, filling my mind with memories I hope will last a lifetime. And considering how rare games as rich and deep as BioShock seems actually are, they may have to.

But if you’re the popcorn game fan, the kind who gets antsy listening to audio diaries and would rather plow through, shoot first and gape at the scenery later, the game is just as well suited to that style of play. BioShock is the equivalent of a Hollywood non-stop thrill ride with a few brief pauses for character development and a love story hiding under the hood, except in the game you can skip right past those and stick to the boom. Just don’t ask me to tell you what happened while you were standing in line in the bathroom.