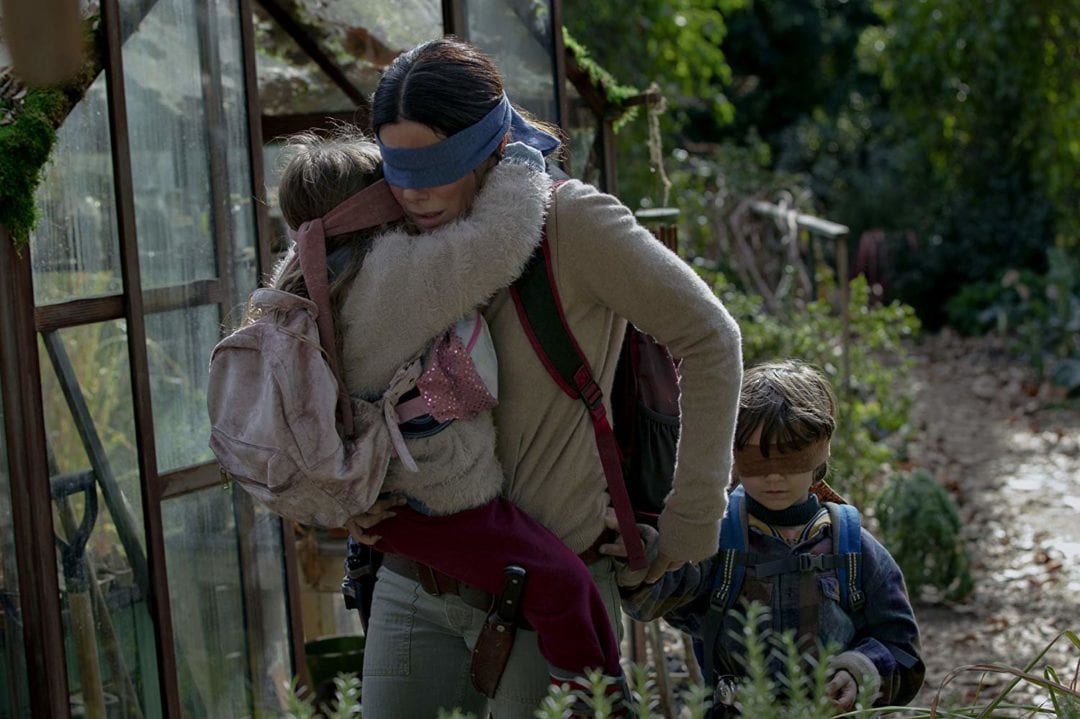 Netflix’s original film Bird Box is a post-apocalyptic narrative in which people the world over begin to see something and then either kill themselves or attack others. To avoid going insane, the few survivors have to blindfold themselves when they go outside. The film never clearly explains what is causing this worldwide catastrophe. Aliens? Ghosts? God?

Instead its  audience is confronted with a single, unanswered question: Why on earth was this film so popular?

Bird Box was streamed by more than 45 million accounts in its first week, breaking records for Netflix original films. The film became a massive social media phenomenon, with people generating Bird Box memes faster than the film’s protagonists threw themselves in front of speeding trucks. The film’s popularity has even led to a worldwide, ill-advised “Bird Box challenge” in which people don blindfolds like the characters in the film in order to perform everyday tasks and then upload videos of themselves staggering around and bumping into things. “Can’t believe I have to say this, but: PLEASE DO NOT HURT YOURSELVES WITH THIS BIRD BOX CHALLENGE,” Netflix tweeted, in an effort to forestall injuries and ward off lawsuits.

The furor is a bit hard to understand since Bird Box is neither especially great, nor especially innovative. It has a lot of parallels with the post-apocalyptic film A Quiet Place which came out the same year and also explored themes of blindness and disability. I saw Bird Box in previews before the hype and thought it was an entertaining, small-scale Sandra Bullock film with a nifty concept and few pretensions. It was fine, but I never would have predicted it was a massive hit waiting to happen.

I’m not an outlier. Review aggregator Rotten Tomatoes gives the film a 63% positive rating based on critic recommendations and a 65% positive score based on user feedback. Bird Box is a hugely popular film, but not a beloved one.

Aja Hoggatt writing at Slate argues that Bird Box shows the predictive power of Netflix’s algorithms, which she thinks indicated that a film with an older female protagonist and a fairly diverse cast would do gangbusters. But Netflix hasn’t released information about its algorithms, so what they suggest and how or whether they were used to put Bird Box together is entirely speculative.

It’s certainly true that Sandra Bullock is popular and that movies with diverse casts — like Black Panther, Get Out or Bullock’s last film Ocean’s 8 — can be very successful. But if Netflix’s algorithms can really see into the future, why haven’t all of Netflix’s original films become massive hits? Have you even heard of The Cloverfield Paradox or Father of the Year? Netflix makes a lot of critical bombs that disappear with barely a social media burp. If the company has an algorithm to predict hits, it doesn’t seem to work all that well.

Bird Box isn’t successful because of quality, nor because of some sort of magical demographic perspicacity on Netflix’s part. In fact, there is no clear reason that Bird Box was successful. It got lucky, and human herding behavior did the rest. Human desire to do what other people are doing has a huge impact on success in the arts, according to economist Alan Krueger. He has found that people who are told that a song is popular are much more likely to say that they like it.

You might think that people started creating memes about Bird Box because it was popular. But in fact it seems like it became popular because people were making silly memes about it. These memes were often mocking the film or just riffing on it; they weren’t meant as critical endorsements. But they made people talk about the movie, and signaled that other people were interested in it. That translated into a lot of people going to Netflix to give it a watch.

Art is, in part, a community experience. People listen to music or see films in order to keep up with what other people are talking about. Often the quality, or even the content, of the art is largely irrelevant. The important thing is simply that other people like it and are talking about it. Economist Ivo Welch notes that tourists tend to frequent restaurants that have people in them, which in turn attracts more people, and so on. Popular things are sometimes popular because they’re popular. There doesn’t have to be another reason.

How does a song or a film suddenly become the thing everyone is talking about? Krueger argues that it’s often because of unpredictable, trivial reasons. “In addition to talent, arbitrary factors can lead to success or failure, like whether another band happens to release a more popular song than your band at the same time,” he said. “The difference between a Sugar Man, a Dylan and a Post Break Tragedy depends a lot more on luck than is commonly acknowledged.”

As with the famous butterfly from chaos theory, small changes in initial conditions can have huge effects on how art is received. In the case of Bird Box, it probably helped that the film was released over the holidays at a time when there wasn’t much competition from new content on television. Release Bird Box a week earlier or a few days later and it might not have caught on. Add a few positive high profile reviews of a different quirky post-apocalyptic release like Mortal Engines or Anna and the Apocalypse and maybe one of them would have been the thing driving memes.

The randomness of success in the arts can be frustrating. I don’t have anything against Bird Box. But if everyone has to be talking about one thing I’d much rather it were Mozart in the Jungle, a wonderful Amazon series that just got cancelled because it wasn’t hip enough, or Counterpart, a Starz series I love that I really worry is going to get canned.

But the public is fickle and its whims incomprehensible. Overall, that’s a good thing. If there was an algorithm for making popular art, everyone would use the same algorithm and we’d be stuck watching Sandra Bullock wander around blindfolded on every screen forever, without respite. Bird Box has its failings, but it’s right that art benefits from a little mystery.