The passing of Chadwick Boseman was a shock to the world. Boseman had kept his condition private, so very few people knew that his death was coming. In a short career, Boseman established himself as a legend. Discussing the casting of Boseman in Da 5 Bloods, director Spike Lee put it in context: “We cast Jackie Robinson, James Brown, Thurgood Marshall, and we cast T’Challa. Chad is a superhero!”

One of the most common conversations to follow that news revolved around the question — how do you tell children that the star of Black Panther is dead? Children are reportedly staging mock funerals with action figures to help them process the news. This is unsurprising to anybody who paid attention to the release of Black Panther in February 2018. Black Panther was always designed to speak to children, always cognizant of what superheroes meant to younger audiences.

This is undoubtedly part of the metatext of Black Panther. The film’s release was marked by reports of celebrities buying out screenings so that young African American children would have a chance to experience the film. As Octavia Spencer explained, these screenings allowed young black and brown children to “see themselves as a superhero.” There had been black superhero movies before, from Steel to Blankman to Blade, but never on this scale, and never aiming at this broad an audience.

To a certain extent, most superhero movies are aimed at children or teenagers. One of the reasons that Disney bought Marvel was to cement its appeal to teenage boys unlikely to see movies like Tangled. There’s a universality to the superhero template. Many classic superhero movies are built around the Campbellian narrative of a boy who journeys to adulthood, often in confrontation with a father or a father figure. 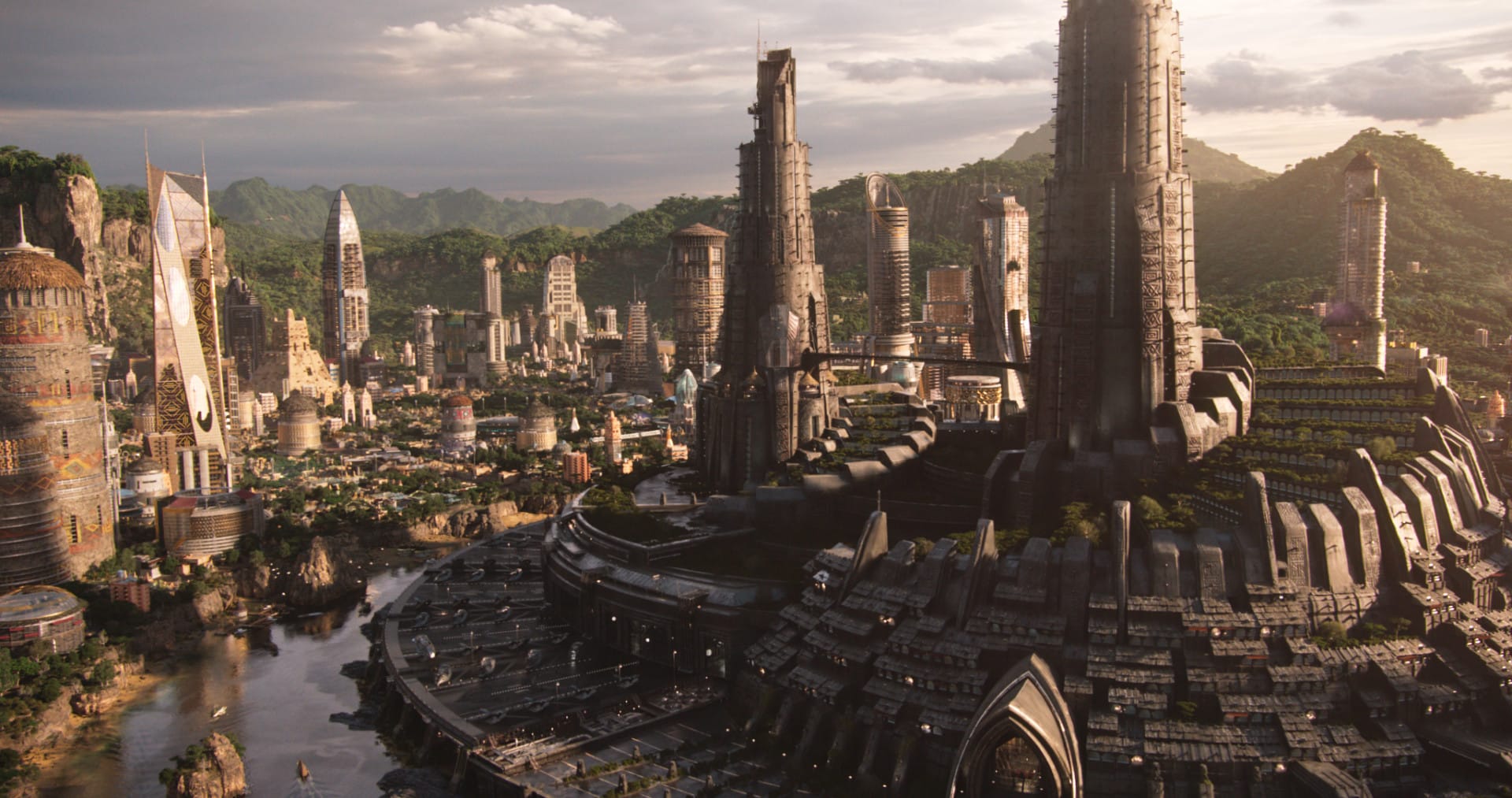 Perhaps the modern superhero movie is a companion piece to the comedies of Judd Apatow, films like Knocked Up and The King of Staten Island, which focus on men who are legally adults having to grow up. The men who are making this journey to maturity seem to be getting older. The 25-year-old Mark Hamill has given way to the 42-year-old Robert Downey Jr., the 35-year-old Chris Pratt, the 40-year-old Chadwick Boseman, and – perhaps most Apatowian of all – the 46-year-old Paul Rudd.

Boseman plays T’Challa with childlike wonder and innocence. It’s a remarkable performance. The actor sells Black Panther as a genuine coming of age for the character. M’Baku (Winston Duke) calls out T’Challa as “just a boy – not fit to lead.” T’Challa’s reunion with his ex-girlfriend Nakia (Lupita Nyong’o) leans into the character’s teenage insecurities. “Just don’t freeze when you see her,” advises Okoye (Danai Gurira). T’Challa does freeze “like an antelope in headlights.”

Still, more than any other film in the Marvel Cinematic Universe, Black Panther understands that it is going to be seen through the eyes of children. Director and co-writer Ryan Coogler structures the film to emphasize this. From its opening scenes, Black Panther is framed as a fairy tale. Even before the company logo, a child’s voice speaks. “Baba,” the young boy asks. “Tell me a story.” With that, the screen comes to life. There is an understanding that what follows is that story.

In the weeks and months following the release of Black Panther, as memes like “Wakanda forever!” became increasingly widespread, right-wing critics mockingly protested, “Wakanda does not exist.” Of course, that’s the entire point of the film. Even within the world of the film, Wakanda is illusory. It is introduced to the audience as a series of sand sculptures. It is hidden from the world behind holograms. 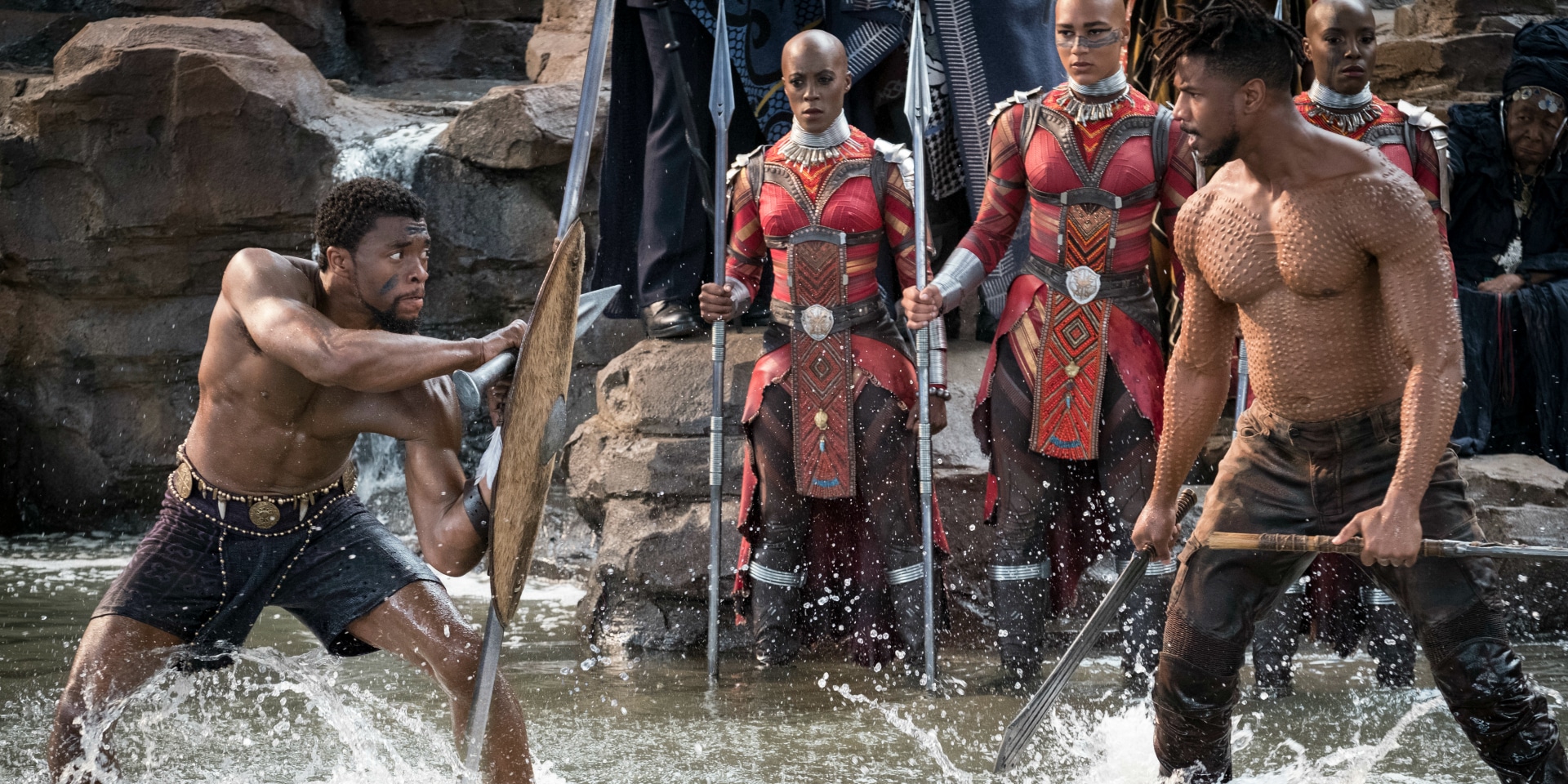 When Ulysses Klaue (Andy Serkis) describes Wakanda to Everett K. Ross (Martin Freeman), Ross is dismissive, “That’s a nice fairy tale.” When Ross awakens in the country, he asks whether he has been taken to Wakanda. Shuri (Letitia Wright) sarcastically invokes The Wizard of Oz by replying, “No, it’s Kansas.” Black Panther is populated by dream spaces, such as the twilight landscapes where T’Challa and Erik (Michael B. Jordan) visit with the ghosts of their fathers.

Wakanda is not diminished because it doesn’t literally exist. It is powerful because it exists in imagination. “Wakanda itself is a dream state,” explains Ava DuVernay, “a place that’s been in the hearts and minds and spirits of black people since we were brought here in chains.” Black Panther manifests this dream state on screen. It renders it real, projecting it in light. The film is not about a fictional African nation; it is about “the African American syncretic embrace of a motherland lost.”

It is the idea of Wakanda that is important, and it is particularly important to children. After the introductory history lesson, Coogler pushes the audience out of the epic science fiction fantasy that they might have expected and into “the naturalistic mode of an indie.” The first flesh-and-blood characters to appear on screen are children playing basketball in Oakland in 1992. Both Ryan Coogler and the real Black Panther Party were born in Oakland. Coogler would have been 6 years old in 1992.

This is the real world. Children play basketball on a court without a proper basketball hoop. In an apartment, a television set plays footage of the 1992 Los Angeles riots. King T’Chaka’s brother, N’Jobu (Sterling K. Brown), has been sent to the United States from Wakanda and is horrified by what he sees: “Their leaders have been assassinated. Communities flooded with drugs and weapons. They are overly policed and incarcerated.” N’Jobu could not stand idly by. 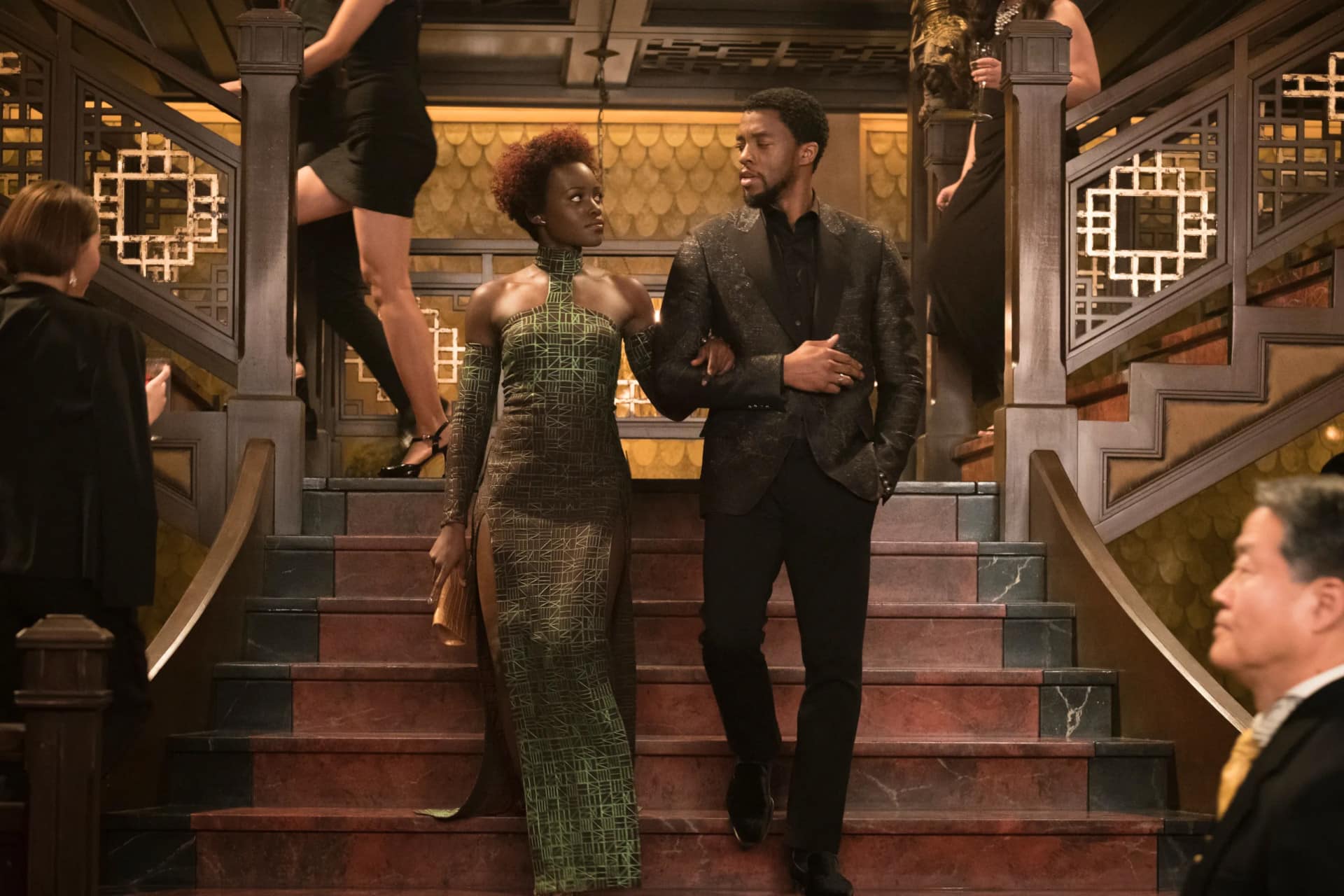 When T’Chaka (Atandwa Kani) visits N’Jobu to take him home, there is a confrontation. N’Jobu is killed. The Wakandans retreat from the material world. In doing so, they abandon N’Jobu’s young son, Erik. This is Wakanda’s original sin. When T’Challa discovers this more than two decades later, he is horrified. “Why didn’t you bring the boy home?” T’Challa demands of his father. “You were wrong to abandon him.” That abandonment has scarred Erik, shaped him, warped him.

Wakanda did not fail Erik in any literal sense. Black Panther rejects the fantasy of violent revolution by Wakanda, which makes sense in the context of Wakanda being a fictional construct. Wakanda cannot solve systemic racism through force, because it does not exist. Instead, the idea of Wakanda failed Erik. Erik cannot conceive of a better world. He only knows the world as it is. “I know how colonizers think,” he boasts. They think violently, and he replicates those patterns.

When Erik takes the heart-shaped herb and visits his twilight plain, he cannot see the beauty of the African savanna. Instead, he sees the mundane reality of his childhood. “Look at what I’ve done,” N’Jobu laments. “I should’ve taken you back long ago. Instead, we are both abandoned here.” Maybe if Erik had been allowed the fantasy of Wakanda as a child, maybe if that imaginary world had been accessible, maybe if he could have seen himself as a superhero, things could have been different.

That is the importance of Black Panther. It is about recognizing the importance of such escapism for children, of having these imaginary spaces. In a viral video, an African American audience member is so moved by the very idea of Black Panther as a film celebrating an imaginary space reserved for Black people that he remarks “that this is what white people get to feel all the time.” In a heart-breaking stinger, one of his friends sighs, “I’d love this country too.” 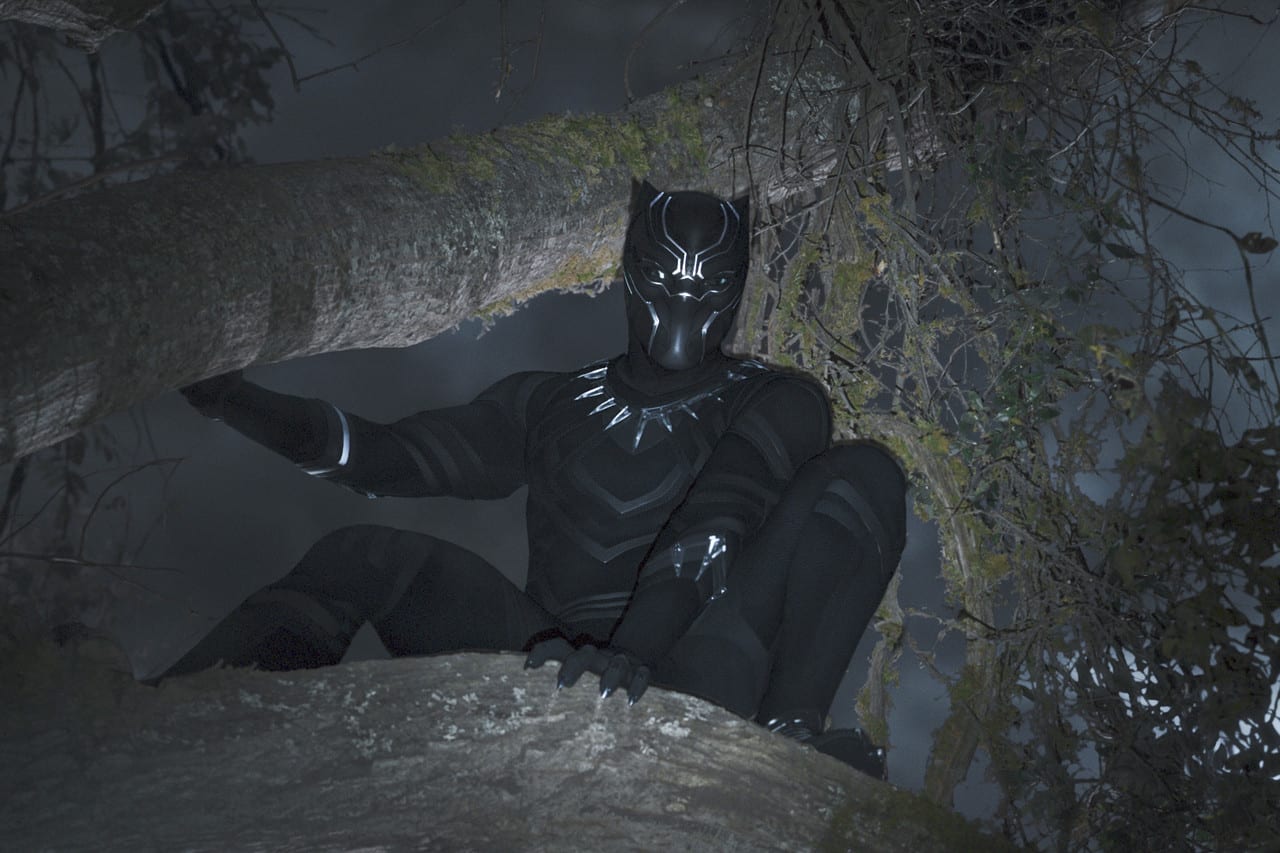 It is particularly important for children to know that there are spaces in the popular imagination for people who look like them and who share similar experiences. Pop culture is still dominated by the default white male gaze. Women and people of color are still vastly underrepresented in film and television. It took the Marvel Cinematic Universe 20 films and almost a decade to build a film around a Black superhero.

Superheroes are a fantasy, and often a utopian one. At their purest, they allow us to see the best of ourselves. Black Panther understands this better than most, as demonstrated by the shots of young Black children looking up at the magical Wakandan technology in awe and wonder. Black Panther is pointedly bookended by sequences that bring Wakanda into the real world. Shuri is disappointed to visit Oakland rather than “Coachella or Disneyland,” but that’s the point.

While T’Chaka’s fighter flew over Erik’s head, T’Challa’s fighter lands in the middle of the day. It becomes tangible and tactile. The dream of Wakanda, of a world of Black superheroes and infinite possibilities, is rendered real to these children. The last line before the closing credits is given to a young African American boy. “Hey, yo!” he shouts. “This yours? Who… who are you?” T’Challa smiles.

The dream is shared.