When I try to describe the original Bleed to people, I always fall back on,”It’s the Vanquish of side scrolling 2-D shooters.” That probably sounds ridiculous, but it is nevertheless true, and Bleed 2 continues and improves on what made its predecessor a great game. 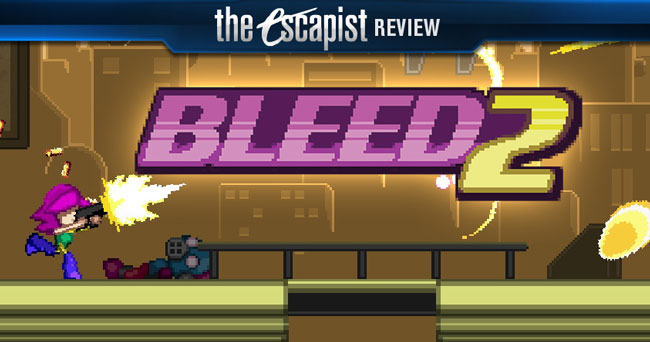 You are Wryn, now enjoying the glory of your status as the world’s officially recognized Greatest Hero of All Time after the events of the first game. Then aliens attack for… well, some reason that presumably makes sense to them, and it’s up to you to save the Earth.

You have a pair of guns with an inexhaustible supply of bullets that you can shoot in any direction twin stick-style and a katana that functions as both a weapon and a means to reflect (some) incoming fire. You also have the ability to temporarily slow down time, and one of the few quadruple jump abilities in video games. It’s not a jump, exactly; once you’re in the air you can zoom around three times in any direction (including downwards) before touching the ground again.

With these abilities and some skill, you can do virtually anything.

Bleed 2 initially looks, especially in still images, like a fairly conventional 2-D retro shooter. It isn’t. Like its predecessor, Bleed 2 is about putting you up against opposition that seems completely unreasonable and insurmountable – because in most games, it would be – and giving you the tools to win anyway. Between your quadruple jump/zoom and the ability to slow time, you can be both incredibly maneuverable and extremely precise. And you need to be, because Bleed 2 likes to throw a lot of crap at you at once, especially on higher difficulties.

For a game to get away with being an hour long and getting its longevity from replaying the game, the gameplay has to be really, really good. And Bleed 2’s is.

The result, as you mow down enemies with your weapons, weave and slash through hails of enemy fire in mid-air, zip out of the path of seemingly unavoidable hazards, and batter the enemy with their own reflected attacks, is absolutely exhilarating. Even after I was thoroughly acquainted with the game’s mechanics, I still found myself thinking, “I can’t believe I actually got out of that one!” on a regular basis. It has more in common with games like Metal Gear Rising: Revengeance or the aforementioned Vanquish than the traditional side-scrolling shooters the game takes its visual inspiration from.

You have a style meter that fills as you damage enemies, deflect incoming fire, and evade damage, and at the end of every stage the game ranks you and applies multipliers to your score based on how quickly you completed the level, how much damage you took, and your average style ranking. So you have reason to be daring and aggressive rather than playing it too safe. Unless you’re sufficiently dead inside to actually be okay with seeing a row of Cs or- God forbid- Ds at the end of every cleared stage. Which is fine; I’m not judging. Well, not much.

This gets to the essence of the game. Bleed 2 is short, if you measure a game’s length and how long it takes to complete once. Very short; I can play through all of its stages in under an hour. How much of a problem that is depends on what you’re looking for. Bleed 2 is not the sort of game to be played through once in order to hear the story or see all the content or get the “experience” and then put aside, and if you approach it as if it were you’ll probably be disappointed. It’s a game to be played through again and again to hone your skills, get better and better, and surpass your past performances.

Of course, for a game to get away with being an hour long and getting its longevity through replaying the game many times, the gameplay has to be really, really good. And Bleed 2’s is. I’ve already played the game many times longer than it would take to just get through it once and intend to play considerably more. It’s also only $10, so judging the game’s length by the standards of a $60 game really wouldn’t be reasonable in any case. Even so, the amount of time I spent with it still compares favorably to many AAA games.

Even with the abilities the game gives you, Bleed 2 gets extremely challenging at higher difficulty levels, But it consistently feels like one of the most scrupulously fair and, for lack of a better word, transparent action games I’ve played. Even when I was getting the tar whipped out of me I never felt like the game was being unfair or arbitrary. I could always immediately discern what I’d done wrong, and what I should’ve done instead. That goes a long way towards making higher difficulty levels enjoyable.

While short, the stages are well-designed, interesting, and entertainingly over-the-top. Every level is fun and well-paced, and each contains a number of excellent boss battles. These were the highlights of the game for me, which is remarkable since I don’t generally like boss battles, or at least not as much as I like tearing through hordes of mooks. But the boss fights here are great, and where mechanics like the ability to reflect enemy attacks really get to shine.

Visually, the game is not spectacular, but it still looks pretty good, with graphics that resemble a souped up version of something from the 16-bit era. The characters have personality, the various environments you fight through are visually interesting, and most importantly it’s always clear what’s going on. The music is absolutely fantastic, with a variety of tunes that sound like modernized versions of the sort of music you’d hear in a game like Mega Man X. It’s all very fast-paced, exciting, and extremely catchy.

Bleed 2 is definitely not for everyone. It’s short, has minimal story, and is all about honing your mastery of the game’s mechanics to an ever-sharper edge, rather than narrative or discovery. But if you like action games, it’s a fun and often thrilling experience that doesn’t lose its luster on repeat playthroughs.

Bottom Line: At the risk of sounding repetitive, Bleed 2 really is the 2D retro pixel art answer to games like Vanquish or Metal Gear Rising. It’s an intensely exciting action game with great mechanics, awesome music, and some amazing battles that put most 3-D big budget shooters to shame for intensity and sheer fun. It would’ve been nice if it was longer, but the quality of the gameplay gives it so much replay value that what we get is still more than enough for what it costs.

Recommendation: Bleed 2 is a great choice for anyone who loves extremely fast-paced action games that reward skill. Particularly if you’ve ever wanted to quadruple jump a path through a swarm of gunfire and flaming wreckage, riddle a bunch of enemies with bullets in slow motion, and finish off a hostile helicopter by deflecting one of the dozen missiles it’s launched that you back in its freaking face with your sword before touching the ground. It’s that kind of game.