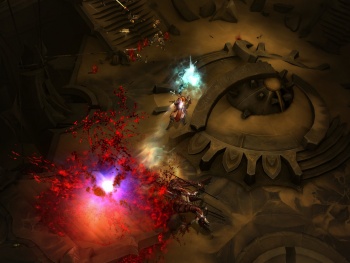 Hearts explode, bodies explode, whatever Diablo III‘s Monk gets his hands on explodes. Luckily, I didn’t explode when I got my hands on and spent some time with him.

Where’s my Necromancer? Where’s my Paladin? Where’s my Amazon? Anyone expecting to see their favorite class make a pseudo-return to Diablo today might have been a little disappointed to see that Blizzard decided to go with none of the above for its new Diablo III class. The Monk might strike you as Diablo III‘s version of the Assassin (or, yeah, of The Monk from the Hellfire expansion), but really he’s not that either. This bad boy’s in a class of his own.

Why a Monk? Blizzard said that they were looking for a class pen-and-paper RPG class archetype that hasn’t been mined in modern action-RPGs, and for something that was different, that, specifically, felt like a fighting game character. Maybe they’ve been playing Street Fighter IV, who knows?

I’d say that playing the Monk is less like controlling Ryu in Street Fighter than playing The Scout in Team Fortress 2. He packs a massive punch, but he’s got to be handed nimbly – dodge, shield, gib enemies, dodge – or you’ll get burned down in a second. The “fighting game” elements come in the form of the combo-ability of some Monk skills.

This isn’t like playing a Rogue in World of Warcraft, building combo points. Instead, skills can be chained in combos of three, and depending on when you use a skill, it’ll take on different properties. Example: you click once and use Crippling Wave, which slows enemies, then, for the second strike, you hit Crippling Wave again which now applies a damage debuff. For the third and final part of the combo, you could hit Crippling Wave again and refresh both debuffs, or, you could hit Exploding Palm, which will lay a damage-over-time effect on the target, which, if it happens to kill the target, will cause its heart, and then its body, to explode, doing damage equal to its maximum health to every enemy its exploded parts touch.

Since the Monk doesn’t have much in terms of defense, unlike his brother in arms the Barbarian, you’ve got to be wily to survive with him. That means busting out skills like the shield move where the Monk starts spinning his staff fast enough to create a forcefield or blinding enemies, but the best defense in a game like Diablo is obviously a good offense, and the Monk’s combo system shines here.

When I encountered large groups of enemies, I’d find the mob who might have the most HP, tag them with a combo that ended with Exploding Palm, and then use the Seven-Sided Strike move which has the Monk do lightning fast strikes on multiple enemies (It’s like Diablo II‘s Chain Lightning but “you’re the lightning”) and tip the enemy with the Exploding Palm damage-over-time into death, exploding the thing’s body and causing huge area-of-effect damage. One body exploded, then the rest of them exploded.

I was hugely impressed with the Monk. He’s different, he’s challenging, he’s an absolute blast to use. Here’s the best evidence that this class is fun to use: I stopped looking at item drops, I just wanted to fight things.

Blizzard’s doing interesting things with him lore-wise as well (they described his vibe as a fusion of Eastern European orthodox religion and Asian mysticism), so if you’re a nerd for that kind of stuff, you’re covered. For everyone else, get ready to show the world that swords-n-sorcery have got nothing on a fast pair of fists.