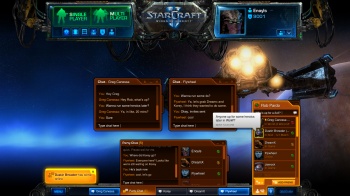 What’s the deal with Blizzard’s fancy new version of its Battle.net online multiplayer service? Blizzard offered a look into the future of Battle.net at BlizzCon today.

There’s quite a bit to digest about the new Battle.net, but the bottom line is that Blizzard is taking what is an extremely outdated service and bringing it up to date in a world that’s full of social networking, community-oriented gaming and all that “let’s be friends online” jazz. Blizzard executive VP of game design Rob Pardo namedropped names of everyone from Facebook to Xbox Live to Plants vs. Zombies to Google Talk, and the influences are clear in the features.

First off, how this all relates to the thing you kids really want to know about: StarCraft II. The service will launch with the game, and as Pardo says, the two are “extremely connected.” Your Battle.net account covers all your Blizzard games, tracking achievements and info across multiple games. For SC2, the game’s interface is designed to look like an online service, with multiple panels (“widgets”) that bring to mind the old Battle.net multiplayer interface meets the World of Warcraft launcher. You’ve got campaign and the different modes, but also a friends list and a feed of Blizzard and StarCraft news.

“Even before you play your first game you’re already connected to the online community,” Pardo said. “We really feel like we’re in an online world.”

Battle.net will maintain a profile for your StarCraft account, which is a bit like a WoW Armory page. It tracks your achievements, match history and more. Speaking of achievements, there are some concrete rewards for unlocking them – you unlock user icons to use on your Battle.net account, but more interestingly you get Decals, which are little icons and designs which will appear in-game on your SC2 units and give a real touch of customization to your Battle.net play.

As much as people love superficial stuff like decorations and user icons, Battle.net’s about playing the damn games, and this new iteration brings quite a few new features for both competitive and casual players. The Ladder system has been totally overhauled so that it caters to players of all stripes. Now the Ladder is divided into seven different leagues (from “Practice” to “Pro”) and within each league you’re grouped into a division of 100 people that Battle.net’s magic machines guarantee will be on your level of play. “Everyone has a chance to win your division,” Pardo said, and if you do happen to win, you’ll advance to an inter-division tournament to really prove your mettle and “win the league.”

For casual casuals (as opposed to “serious casuals”), there are other multiplayer options, like the Practice League, which will offer slowed-down gameplay and maps designed to prevent you from getting completely steamrolled by advanced techniques.

Of course when you’re getting steamrolled it’s a bit easier to swallow when it’s by someone you’ll never have to face the shame of confronting in real-life, but if you’re the kind of guy who likes to mix your real with your online life, Battle.net is pretty much made for you. Blizzard’s planning a system called “Battle.net Real ID,” which structures your online social life around your real world one. If you add someone to your friends list using Real ID (they have to verify you’re actually friends, you can’t just e-stalk them after a click), Battle.net will group them at the top of your friends list.

You can register Real ID friends by actual human names, rather than having to remember who WORGENWARRIOR1 is in one game and who he is another. That’s something I’d love to see in Xbox Live. Real ID friends can publish “Toasts” or “broadcasts,” which sound a lot like Facebook status updates. This makes it so you can do things like play SC2 while having a message up that says you’d like to play WoW later, so you’re not jumping around private messaging people or sending them texts just to tell them what you’d like to do.

Of course there are other features of the type you expect from any online social network service these days: an IM-style chat system that lets you group chats (and should alleviate some headaches when you’re juggling a million different whispers), a Party function that lets you create Xbox Live-style parties with groups of friends and more.

Those things will launch when Battle.net comes out with StarCraft II…whenever it comes out. What comes after that should prove to be one of the most interesting things about Battle.net: the StarCraft II Marketplace, which Blizzard says will “a vibrant ecosystem of user-generated content, including multiplayer maps, single-player scenarios, challenges, themes, and more.”

Maps will come in free and premium varieties. Premium maps, Pardo said, will be maps that add a “layer of professional content” and – here’s the sweet part – will not only be publishable (like regular user-made maps) but sellable. Yes, if you design that really perfect SC2 map, you can actually make money off it. Blizzard cited examples like Counter-Strike and Day of Defeat, saying that they envision amateur designers using “StarCraft II like an engine.”

The details are a bit sketchy – Pardo said that a game like Defense of the Ancients would go for free, which leaves it a bit up in the air what would constitute the “layer of professional content” that would define a premium map. Hopefully we’ll learn more as BlizzCon ’09 continues.