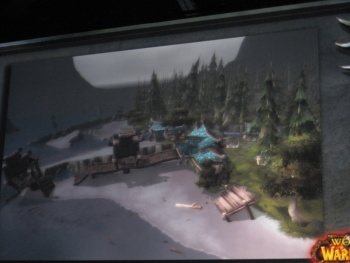 The wreckage of Auberdine in Darkshore

As the Worgen and the Goblins join the Alliance and Horde, Azeroth as we know it is no more – the explosive Cataclysm has reshaped the world from level 1 to level 85.

Deathwing’s explosive return to Azeroth changed the world of Warcraft, and as the four WoW masterminds unveiled the third expansion to the massive MMOG, we got a look at just how much had changed.

Beyond the revamped classic zones, there are seven new zones to explore in Azeroth. Two of them are the new Worgen and Goblin starting zones – Gilneas and the Lost Isles, respectively – for levels 1-15, and the other five are meant to carry players from level 78 to level 85. All of the new zones are heavily steeped in Warcraft lore: Uldum, Mount Hyjal, Deepholm, the Sunken City of Vashj’ir, and the Twilight Highlands (housing the long-awaited stronghold city of Grim Batol).

The Old is New: As far as the existing zones go, every single zone will be getting a revamp from Elywnn Forest to the Eastern Plaguelands – updated quests, art, and items, using what the designers learned in TBC and WotLK – “We’re only getting better.” It will be a lot more fun to go through the old world with a new character, said Afrasiabi, and Chilton quipped that they would be “ditching Agility/Spirit boots as quest rewards – or there will be hell to play.”

Every classic zone will be getting a revamp, with some more than others. The “Phasing” mechanic from Wrath of the Lich King will be heavily used throughout Cataclysm, even phasing entire terrain – we saw an entire coastline sink below the sea over the course of three phases. Not every zone will change hugely, while some will look entirely different: Elwynn Forest might only receive new quests and some minor changes, but the Barrens, for instance, are completely split in half – one half filled with cracks and crevasses, one half regrown and lush thanks to the efforts of the Druid Naralax.

Similarly, the new sources of water unearthed by the Cataclysm have restored some greenery to Desolace while raising (or sinking) islands off of the shore. In the Night Elf zone of Darkshore, the town of Auberdine is completely destroyed, and the quest hub moved to a refugee town in the north – meanwhile, Garrosh Hellscream is on the warpath, setting up new Horde fortresses in the Zoram Strand. In Stonetalon Mountains, the Goblins have blown out the tunnel between Stonetalon and Ashenvale, and the Charred Vale is now filled with lava – “The even more charred vale.”

As all of Azeroth will be flyable now (you can use those fancy flying mounts in the old world!) all of the cities have been made flyable – we saw the Undercity, and it’s looking pretty cool from the air.

The New is Newer: The remade old zones aren’t the only draws for Cataclysm, as we got a look at some of the brand-new locations as well. The Sunken City of Vashj’ir and Mount Hyjal are the two “starting zones” for the new expansion (Blizzard having learned their lesson from Burning Crusade). Vashj’ir is an entirely underwater zone, a submerged city on the ocean floor. The developers mentioned that they were hard at work making underwater combat “not suck,” and from how they described it, it seemed like there would be seamless integration between swimming and fighting on the sea floor – with underwater mounts, naturally.

Hyjal has been teased – and requested – since the beginning of WoW, but only now did the developers feel they could add the Hyjal that they “wanted to give everyone.” After being banished back to the Elemental Plane by adventurers back in Molten Core, Ragnaros the Firelord has returned, laying siege to Hyjal in an attempt to burn the World Tree to ash. Archdruid Malfurion Stormrage has finally woken from his slumber in the Emerald Dream to oppose him, and players will have to make a stand against the Firelord once more, with Terrain Phasing used to great effect.

Uldum is very “Egyptian,” a desert with a huge river running through it, the fabled land of the Titans. It’s rumored to hold a superweapon – “Uldumsday weapon” drew a groan from the crowd – and a new race of stonelike cat people made by the Titans, the Tol’vir. The rise of Uldum is actually related to the actions of players adventuring in Ulduar – a sequence of events that “will result in crazier stuff farther down the line” for Azeroth.

Deepholm is not physically in Azeroth, but the elemental plane of Earth – where Deathwing was chilling and gathering power before he erupted back on Azeroth. It is a massive subterranean zone, the “biggest zone we’re building,” and acts as a hub to all of the other new areas in Cataclysm.

Finally, the climax of Cataclysm will take place in the Twilight Highlands. Deathwing has made his base in Grim Batol, so powerful and molten that his path literally burns the city in half where he flies, a molten crevasse through the city. It is the Headquarters of Deathwing’s Twilight Hammer servants, his brand-new Twilight Dragonflight, and they’ve pushed the benevolent Red Dragonflight out to a last-ditch stronghold.

There’s No Going Back: These changes, by the way? They’re for everyone, even those who don’t have Cataclysm. There will be no way to go back to do old content once Cataclysm hits, and the level progression will be completely changed. Zones are for smaller level ranges (there won’t be any more Stranglethorn Vale, covering 15 levels), and certain old-school zones will be revamped as higher or lower level content (for example, Western Plaguelands is now for the low 40s).

The world has changed, but Cataclysm has more beyond that. There are new race/class combinations, new dungeons and raids, new PvP systems, and an entirely new system of character advancement called the Path of the Titans – come back for the third and final part of our preview of World of Warcraft: Cataclysm!