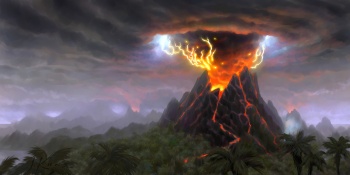 The world of Warcraft isn’t the only thing that will get some changes in Cataclysm: There will be new class/race combinations, entirely new systems of advancement – and a ton of new raids, dungeons, and PvP areas.

With the explosive announcement of WoW: Cataclysm earlier today at BlizzCon, there was a ton of new information coming down the pipe at the Preview Panel immediately following. But beyond the new races and the complete reshaping of Azeroth, we got to take a look at the rest of the stuff, too.

A Classy Expansion, But Not a Talented One: Ever wonder why Druids could only be Tauren or Night Elves? Or why only Blood Elves and Draenei could be Horde Paladins or Alliance Shamans, respectively? Cataclysm will add a bunch of new Class/Race combinations to the game – Troll Druids, Tauren Paladins, Dwarf Shamans, Human and Undead Hunters, and Gnome Priests (to name a few). Variety is the spice of life, after all. (Or, “Holy Cow!”)

On the other hand, there won’t be any new levels of Talent trees – there will be five more talent points with the five more levels, and remade and refined talents, but the 51-pointers will still be as deep as the trees go. On the other hand, Blizzard will be adding the “Mastery System” – while they intended for talents to be cool, fun options, they found that players didn’t take talents that didn’t give direct benefits: “More healing, more criticals, more damage.”

So instead, they will be taking some of those out of the talents, and putting them in the talent trees themselves – as the designers phrased it, it sounded like a Mage who put points in Fire – for example – would earn a boost to damage with every point he spent, no matter which talent it was in.

Excavating the Path of the Titans – With only five levels, the problem that the designers faced was, how could players customize their characters in lieu of new talent points? The new Secondary Skill, Archaeology (yes, a Secondary Skill – anyone can have it, like Fishing, Cooking, and First Aid) will enable players to explore the Titan ruins across Azeroth, to research and discover Artifacts that they can bring to different groups in the world to advance down the Path of the Titans. These Paths are not class-specific: A Rogue may choose any of the Paths, and a Priest may choose the same one that he does. No specifics were named, though.

Advancing as a Guild: Cataclysm will introduce the Guild Advancement System, where everything that players like to do – daily quests, raids, Battlegrounds – will contribute to the advancement of their guilds, through twenty “Guild Levels.” There will be perks, and even a Guild Talent Tree to earn things like Cheaper Repairs, or a Mass Resurrection ability to recover after a horrible wipe in a raid.

Raiders of the Lost Dungeon: Even if this expansion takes place back in Azeroth, there will still be plenty of new dungeons and raids for PvE-focused players. In Uldum, there will be two level-up dungeons, the Lost City of Tol’vir (featuring those stone-cat-people), and the Titan labyrinth of the Halls of Origination.

Fans of Classic WoW will either be thrilled or dismayed to learn that Blackrock Mountain will be getting yet another instance – the Blackrock Caverns. Though the designers knew that the Blackrock dungeons and raids were fan-favorites, they “didn’t want to just level them up with new gear.” The Blackrock Caverns are a new dungeon full of new gear and new creatures – as one of Deathwing’s primary bases of operations outside of Grim Batol.

Though the Elemental Plane of Earth, Deepholm, is one of the big new leveling zones for Cataclysm, the other three planes will all be dungeons and raids. Skywall (the Plane of Air), and the Abyssal Maw (the Plane of Water) will have both a level-up dungeon and a main raid, but the Firelands (the Plane of… well, guess) will feature players counterattacking after the siege in Hyjal. Player characters will storm Sulfuron Keep, where a bigger, stronger, and pissed-off Ragnaros the Firelord will be awaiting them to get revenge for his defeat 25 levels ago.

Grim Batol will have a level-up dungeon and a raid, presumably leading up to the final showdown against the corrupted Aspect of Earth, Deathwing himself.

There will also be fan-favorite dungeons returning – specifically, level 85 Heroic versions of Deadmines and Shadowfang Keep. They use the same art and layouts, but with new fights, new creatures, and new abilities. Quoteth Chilton, it will be “Van Cleefier than ever before.”

The War Returns to Warcraft: Despite some shiny new PvE options, there is new PvP content in Cataclysm as well. Blizzard’s goal for the expansion is to have three new battlegrounds, but they only mentioned one, the Battle for Gilneas (Gilneas being the Worgen homeland). It will feature combat in the streets of the city of Gilneas, with players taking control of districts to claim victory. Rated Battlegrounds will be making a debut, allowing players access to the gear and ranks from Arenas without being confined to the deathmatch system.

After the incredibly popular Wintergrasp battlefield in Wrath of the Lich King, Blizzard is continuing that theme with Tol Barad, an island off the coast of the Eastern Kingdoms with a prison that both the Horde and Alliance want to control. It melds the idea of Wintergrasp with Burning Crusade‘s Isle of Quel’Danas – when it’s not in conflict, it’s a daily hub – the main daily hub for the expansion. When the battle rolls around, though, both factions will fight for control, and victory will give access to the Tol Barad prison as well as bonus, “extra-profitable” dailies.

There’s a ton of new information and content coming in this literally earthshattering expansion – and even in three parts, we couldn’t cover it all. I’ll be taking a look at the Worgen and Goblin starting areas here on the BlizzCon show floor (and that’s not even getting into Diablo III and StarCraft II…)

Stay tuned for more from BlizzCon 2009!