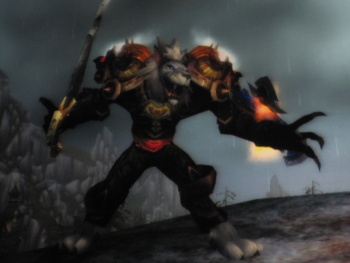 Cataclysm‘s Worgen get in touch with their wild side.

The newly unveiled WoW: Cataclysm is the talk of the show here at BlizzCon, and I got a chance to play through a bit of the starting area for the new Alliance race, the feral Worgen. I say “part” of the starting area, because we actually started at level 6 – apparently there are some big surprises lying in wait at the beginning.

My character woke up chained in a stockade, with two humans arguing whether or not to just put me to death or to give me the full dosage of the potential cure for the Worgen curse – one that would maybe allow me to retain my humanity.

Interestingly enough, while out of combat, the Worgen can shift between their Worgen form and their normal Human state at the touch of a button – so if you want to hang out around the Auction House as a wolf or as a person, you can – but are forced into your Worgen form as soon as you enter combat. The transformation from human to Worgen is actually pretty well-done and looks painful (naturally, it’s skipped in the in-combat shift).

From level 6 on, the storyline deals with a Forsaken assault on the lands of Gilneas, and I was – of course – sent to fight them off. Apparently, fighting off the Forsaken includes throwing kegs of gunpowder on the heads of Abominations so that a blunderbuss-packing quest giver can zap them from afar to blow them up. It also includes getting in a catapult to launch myself onto battleships to kill the captains.

But then, there was a twist – after turning in one final quest, the entire world shook around me. When I once again ventured outside, a huge portion of the coastline had vanished below the waves thanks to an earthquake – the first harbinger of the Cataclysm, one would assume. From there, the story turned to less of a “repel the Forsaken invasion,” and more of a “We need to get out of here, now.”

It wasn’t anything too extraordinary, but the phasing and the (relatively) unexpected inclusion of the Cataclysm and how it changed the zone around me was a very cool touch. The little demo ended right after the first phase of the “evacuation” line, and we’ve seen that the effects of the Cataclysm will be much farther-reaching. We’ll check out the Goblin starting area tomorrow, so come back for that!