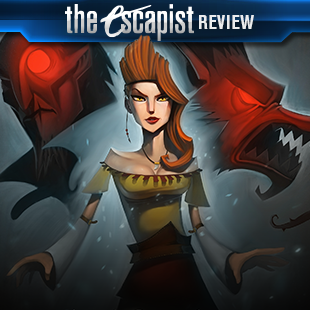 With a dash of Ghouls ‘n Ghosts, a sprinkle of Mega Man, a pinch of Metroid, and a garnish of your favorite schlock horror tropes, Blood of the Werewolf is a brilliantly constructed homage to classic platforming. It has enough of a modern bent and voice of its own to simultaneously satisfy a hardcore crowd’s demand for punishment and a slightly more casual crowd’s expectation of fun.

Blood of the Werewolf was developed by a small indie studio out of Detroit called Scientifically Proven Entertainment, and was originally released for Steam last October. Despite a PC launch in October, BotW was clearly designed to be played with a gamepad – it doesn’t even offer mouse or keyboard play on Steam – and the team was eager to get it into living rooms through console release, first on Xbox 360, with PS3, Vita, and Wii U versions planned for the coming months. While the console experience is largely the same as on the PC, the Xbox 360 release makes it much more convenient to play on the couch on your television, where it was meant to be enjoyed.

Platformers have told stories in some capacity for decades, even when it was just Mario hopping from castle to castle looking for his kidnapped princess. In BotW, you’ll play as Selena, a vengeful mother seeking out her kidnapped son, Nickoli. You and Nickoli also happen to be the last of the werewolves, so you’re fighting for the survival of the species. The story isn’t an epic narrative, but then it’s a platformer, so that’s probably not what you’re here for. It is impressive for the genre, though, as fully voiced narration isn’t exactly commonplace in side-scrollers, especially here given that a truly independent developer’s budget of basically nothing.

The gameplay in BotW is exactly what you’d expect from a classic-styled action platformer. You’re running through levels, dodging obstacles and enemies, avoiding pitfalls, and collecting powerups that are hidden throughout the game, all the while shooting or swiping enemies with Selena’s crossbow, or her werewolf form’s huge claws. Some sections you’ll breeze through without a thought, but the real fun is when the challenge gets ramped up to near-obscene levels. If you grew up on platformers, you’re probably accustomed to dying repeatedly, and BotW wants to remind you what that feels like. While expert players may be able to race through a level unscathed and in record time, us normal folks will inevitably die 10, 20, even 50+ times in a given level before we beat it. Thanks to the death of quarter-fed arcade machines, the checkpoint system in BotW tempers the intense challenges of the platforming sections with frequent checkpoints and infinite lives. You don’t have to be a master to play BotW, you just have to be persistent.
Selena switches between human and werewolf form throughout the game, depending on the visibility of the moon. In human form, you have a crossbow with various special shots like the split shot that looses three arrows, or the fire shot that does damage over time. In werewolf form, you get access to double jump, allowing you to traverse higher obstacles and jump across larger gaps. You’ve only got melee attacks in werewolf form, but you’ll have a distinct set of abilities to complement your primary swipe attack. You start with a dash attack that has you dart across the ground, laying waste to enemies in your path, and making you invulnerable for a brief moment. If you’re in the air, instead you’ll do a ground slam, which is devastating to nearby enemies. There are other abilities in the werewolf’s arsenal, like the Heal ability which has proven to be crucial in certain boss fights, where it is near impossible to dodge all of the attacks. The hidden powerups scattered around reward you for exploration, but failing to collect them can also feel a bit like a punishment. Still, the skill and upgrade system is fun and rewarding for those players willing to check every dark corner for a secret room. 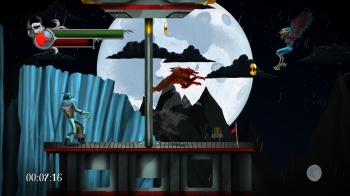 Story mode will have you platforming your way through a number of diverse environments, from graveyards to laboratories. There are several boss battles along the way, which pits you against some of the best-known monsters in horror history; Hyde, The Mummy, Dracula. The voice acting is surprisingly sound for an indie title, and the music throughout the game is perfect for the quasi-gothic-horror motif that BotW puts on, complete with haunting pipe organs.

There’s also Score Rush mode, which I’m not enough of a masochist to spend much time with, but will offer the more serious platformers out there a way to show off. You’ll run through levels and try to achieve the highest score, collecting the most collectibles, and so on. While this will lend some staying power to the game via Leaderboards, the real post-story mode fun is Endless Challenge.

Endless Challenge is procedurally generated platforming that pits you against a random series of platforming segments of increasing difficulty. The goal is to simply survive as many rooms as possible with your limited lives. This mode offers a lot of replay value for those who have mastered all of the story levels already. While you can likely learn how to navigate the finite number of different rooms, the random placement of obstacles and enemies within will still keep you on your toes throughout.

Blood of the Werewolf is exciting, brutal, and extraordinarily fun, but it’s not going to appeal to everybody out there due to its sometimes-absurd difficulty. More easily frustrated gamers will decry it for being unfair, or even impossible, but those more willing to take a beating and keep trying will tend to appreciate the care put into making it a serious challenge, while keeping it just shy of impossible.

Bottom Line: BotW is best played on your TV from the couch on a console, and best enjoyed by players looking for a challenge. If you don’t like dying, you should probably avoid it entirely, but if you’re a persistent sort of player that doesn’t mind having to try a segment a few times, it has a lot to offer.

Recommendation: Fans of classic action platformers should almost certainly give Blood of the Werewolf the old college try. Easily frustrated gamers, however, should steer clear if you value the lifespan of your controller, and possibly TV. While the 360 version recently launched at $6.99 on XBLA, the Steam version is just $2.09 until the end of June, so if you’ve got a PC that can handle it, you can save a few bucks with the Steam version.

Check out our talk with Scientifically Proven’s CEO, Than McClure.