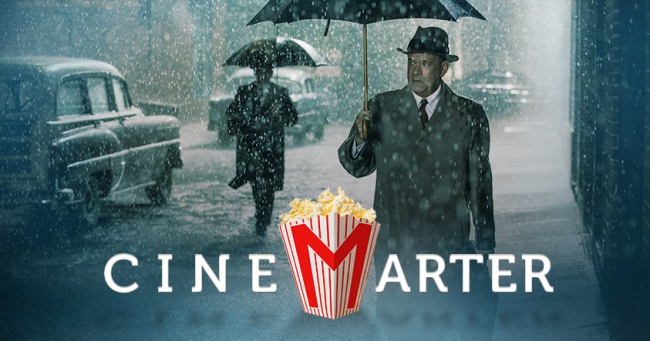 Bridge of Spies has no right to be anywhere near as good as it turns out to be. This is a movie in which a bunch of people sit around various rooms and talk. These conversations more often than not accomplish very little – never nothing, but what could be done in one talk can often take five or six. There is only one “big-name” actor, the setting is the Cold War – although there are no action scenes, nor any points at which the actions of anyone involved could potentially trigger nuclear war – and the protagonist of the film has such a desire to see justice done that you almost wonder if he could exist. On paper, Bridge of Spies shouldn’t work. This is why we don’t watch movies on paper. (And when such technology does exist, I will be disappointed that this phrase no longer applies.)

Bridge of Spies plays out like two different stories that are mashed together – it works, but it makes talking about the second half a little difficult because, in order to do so, it involves more or less spoiling the first half. It’s true, though, that the film is based on a true story, so perhaps nothing can truly be spoiled. James B. Donovan (Tom Hanks) is a Brooklyn insurance lawyer who is asked to defend a man named Rudolph Abel (Mark Rylance), a Soviet spy. Given that this is during the height of the Cold War, this is only to be done as a way to give the illusion that Abel has been given a fair trial; in the minds of almost everyone involved, he’s guilty. That is, everyone but Donovan, who gives him the defense of a lifetime. He loses, but at least convinces the judge to incarcerate Abel instead of giving him capital punishment, arguing that, if the Russians captured an American spy, perhaps an exchange could be reached. 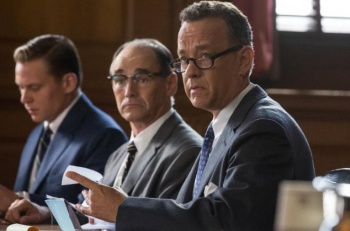 Well, wouldn’t you be surprised when that’s precisely what happens? Francis Gary Powers (Austin Stowell) is shot down while taking spy pictures but fails to both blow up his plane or self-terminate. This is also the time when the Berlin Wall was being constructed. An American graduate student named Frederic Pryor (Will Rogers) is captured when trying to get his girlfriend from East to West Berlin. Donovan is recruited to negotiate an exchange between the Americans and Soviets, with the only focus being on reacquiring Powers. But this is James B. Donovan we’re talking about, so he proceeds with a gambit to acquire both captured men.

That sounds heavy on the plot, and that’s because it is. The film runs for over two hours and is almost nothing but talk. Hanks is front-and-center for the entirety of the proceedings and is a large part of the reason this works. We forget it simply because he doesn’t act as frequently as he once did, but Hanks is an outstanding actor, gifted with both dramatic depth and staggeringly great comedic timing – and he gets to show off both here. His conversations with almost anyone in the film are so captivating that this winds up being all we need to have an enjoyable film.

Bridge of Spies has no right to be anywhere near as good as it turns out to be.

That’s not all we’re given. The screenplay was originally written by Matt Charman, whose only other film credit was another war picture, Suite Française. The Coen Brothers were brought in to revise Charman’s script. That’s likely the reason that Bridge of Spies is as funny as it is. The Coens have a very specific brand of humor, and while this isn’t a film that often feels like one of theirs, you can sometimes feel them poking through. No, Bridge of Spies feels like a Steven Spielberg movie through and through, and that’s because it is. Spielberg continues a pretty stellar track record here, bringing a substantial amount to this project. There’s a reason that we wind up caring about everyone involved – yes, even the Soviet Spy, who might wind up as many audience members’ favorite character. He gives us a great feeling of how the events transpiring in the film are affecting the outside world. Spielberg is excellent at putting humanity into everything, and bringing out the heart of his characters, but we forget that he knows how to make an ordinary scene feel tense, too. And, of course, he gets the most out of his actors in every scene.

Tom Hanks is the star and is in almost every scene. He’s great, playing a very kind, very determined man, and will likely get an Oscar nomination, even if he’s unlikely to win. A much greater chance of a victory goes to Mark Rylance, who steals every moment he’s in – most of which are with Hanks, showing you how much of an accomplishment that is. Rylance is an accomplished stage actor, but his film credits are rather sparse given how long he’s been in the business. He makes his captured Soviet Spy into the most interesting person in Bridge of Spies, and – while not singlehandedly – ensures that we care about his fate. That’s a great accomplishment, given how we’re supposed to feel an immense hatred for him.

Bridge of Spies is wonderful work from everyone involved. You’d expect it, given the talent involved, but on paper the film simply doesn’t seem like it should work. But it does. The Cold War may be a subject that has been mined to death, but Bridge of Spies proves that there’s more gold to be found within that particular topic. Hanks, Spielberg, the Coen Brothers, Mark Rylance – these people make this movie excellent. It’s fantastically entertaining, thrilling, educational, and dramatic. This is one of the best movies of the year and one of the better movies of everyone involved. Bring on the Oscars!

Bottom Line: Thanks to top-notch work from everyone involved, Bridge of Spies is a wonderful movie that makes a well-worn subject feel fresh again.

Recommendation: See Bridge of Spies. There are no ifs, ands, or buts about it.