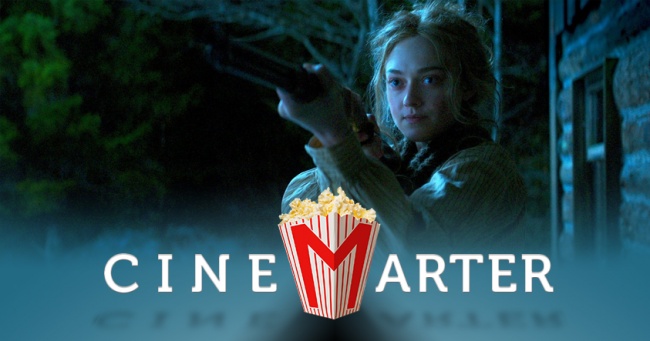 Imagine having the cinematic gall to create a Western whose title is billed as “[Director]’s Brimstone,” runs for two and a half hours, is told in four chapters that are presented out of order, and tonally and story-wise most frequently and closely resembles a rape-revenge horror movie – and your name isn’t Quentin Tarantino. Because that’s what we’ve got on our hands with Brimstone folks, which I think we’re technically supposed to call “Koolhoven’s Brimstone,” as that’s what the title card tells us its official title is. Congrats, writer-director Martin Koolhoven.

The film takes place over the course of several years and follows two primary characters: one played by Dakota Fanning and one played by Guy Pearce. The Pearce character is not given a name, while Fanning’s adopts a couple of them over the course of the film (and sometimes isn’t even played by Fanning; as a youth the character is played by Emilia Jones). When we first meet Fanning, she’s a mute midwife helping out her small town deliver babies – it is too small of a town to justify having a full-time doctor in the 19th Century, I suppose. After a birth goes awry, and she has to choose between saving the mother and the child, she chooses the former and runs afoul of a couple of the townsfolk – most notably, a new Reverend (Pearce). 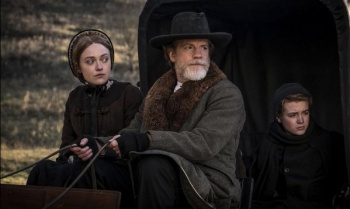 We learn over the course of the next two chapters of this tale that the two characters share a past, and it’s not a pleasant one. Chapter two takes us to a brothel, chapter three highlight’s the character’s journey into adolescence, and chapter four returns us back to the in-movie present, finally putting an end to all of our suffering in a conclusion that I feel is supposed to be both poetic and cathartic but is neither.

For two and a half hours, Koolhoven puts the audience and its characters through terrible situation after terrible situation. It’s just loss, loss, torture, loss, mutilation, abuse, loss. It’s a rare occasion for me to want to stop watching a movie, but Brimstone almost brought me to that place. It’s like the first act of a rape/revenge movie but it takes place for 2/3 of the movie. The protagonist takes it all and then takes some more – she’s not a weak character or anything – but it gets to the point that one has to wonder what the point is.

There are many words that one could use to describe Brimstone, and I’m pretty sure the vast majority of them are synonyms for “repugnant.”

That doesn’t seem to be something for which Koolhoven has much an answer. Pearce’s character is a religious fanatic who justifies his heinous actions through that way, but that’s … not much to go on, really. It lacks the – for better or worse – bigger point that gets made from a Lars von Trier movie, for instance. It’s torture for the sake of torture, really, and none of it is even remotely entertaining. And if you’re not trying to make a statement, you pretty much need to be entertaining, right? Otherwise, you’re just shouting obscenities into a void.

Brimstone isn’t without some positives, though. The out-of-order storytelling gives us a couple of interesting reveals that wouldn’t have been as impactful if it had been told chronologically. In addition, each quarter feels a bit different from the previous one, which makes the 150-minute running time feel not quite as long. Rogier Stoffers cinematography is really quite good, even if what he’s filming is often quite ugly.

The acting is all over the place. Dakota Fanning is strong as the heroine, having to communicate with her face and hands for most of the picture. Pearce, meanwhile, sounds ridiculous with his over-the-top, hyper-religious dialogue, all in what I assume is a Dutch accent. I don’t know if anyone could make what he’s forced to say sound anything but silly – even though his character’s actions are awful. Kit Harington shows up and reminds us that he’ll never do better than his Game of Thrones role. And Carice van Houten rounds out the main cast as a woman who does not have a pleasant time whenever she’s on the screen.

There are many words that one could use to describe Brimstone, and I’m pretty sure the vast majority of them are synonyms for “repugnant.” This is a nasty, unenjoyable film that is far too long and lacks in point and purpose. It’s like a Lars von Trier Western but without any bigger goal in mind. For the most part, it’s not even extreme enough to count as exploitation; it’s just miserable. Despite some good technical merits, there isn’t any reason to watch Brimstone.

Bottom Line: One of the least enjoyable movies that’ll be released this year, Brimstone is awfulness without a point.

Recommendation: You’ll regret sitting through all two and a half hours of Brimstone. So don’t do that.