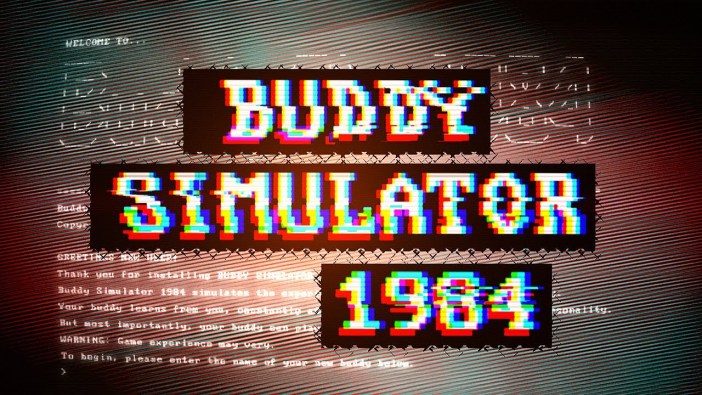 Since isolation is still in effect for a good part of the world, it is natural that some of us will be feeling pretty lonely. This pandemic has been going on for over a year now, making it hard to keep in touch with those we care about the most. Not a Sailor Studios has come up with a practical solution to this dilemma in Buddy Simulator 1984, a delightful horror-comedy game about befriending an artificial intelligence. Your new best buddy is excited to learn about your interests, craft a video game to your specific tastes, and promises to never ever leave your side.

Buddy Simulator 1984 opens on a DOS-like operating system, complete with requiring the player to type commands to launch the game. Starting the program awakens Buddy, an A.I. that cannot wait to get to know you better. After finding out a few details about the player, such as their favorite color, favorite animal, and birthdate, Buddy jumps into the pre-installed games on the computer. These basic games grow old quickly, however, and Buddy feels they could create something better. All they need is access to the core system files. With this newfound power, Buddy makes good on their promise, creating an ever expanding adventure full of the player’s favorite things.

While Buddy is busy creating a highly positive world, however, something dark is lurking around the edges of the quickly growing game. Flashes of mysterious text, deep scratches on the walls of the player’s basement, a rolling blob of color in a monochromatic world add an air of menace to the adventure, a sign that not all is as it seems. In the meantime, Buddy’s affection for the player becomes more and more desperate, a hint of panic behind every “You are still having fun, right?” and increasing levels of distress when one leaves the game. With everything coming apart at the seams, only the player can decide if friendship will prevail or if they would rather rip those seams wide open to see what horrors lurk on the other side.

Buddy Simulator 1984 excels at surprising the player and subverting expectations. Indeed, if your interest has been piqued already, I would suggest playing without reading further, as while I will keep spoilers mild, the constant surprises were my favorite part of the game. Those who would like to know a bit more, read on.

The constant shifts in Buddy Simulator 1984‘s gameplay mirror the shifts in gaming tastes over the years, both celebrating and subverting each style. Buddy’s first iteration of their fantasy world is a text adventure, complete with a traditional parser interface. The adventure is well-written, evoking a decidedly creepy atmosphere. Wandering around the area outside the player’s house, the adventure revolves around item object puzzles that are a little odd, like placing a doll on a swing to open a lock in another room or finding a sentient severed hand while fishing. Buddy’s constant presence is like eyes boring down on the back of your neck. If you go down a path they do not like, the text shimmers so hard it becomes illegible, and extra locks pop up on the front door of the house when you solve their puzzles too quickly.

Make it inside the house and the world shifts into 2D, a style similar to in early Game Boy games. This section was my favorite, full of funny side quests for the inhabitants of a nearby town. The tasks tend to be typical RPG fare — find items to help jog someone’s memory, do an escort mission for a man wandering into the woods, help a band get back together — but each conclusion is unexpected. Helping the amnesiac reveals a really traumatic memory, the escort mission is for the toughest-looking guy in the village and completely without incident, and reuniting the band involves overlooking a heinous crime. Only a handful of villagers need to be helped to advance the plot, but the laugh-out-loud stories drew me to do every single side quest. The glitchiness of the world is more evident here, the player’s pet “cat” walking over buildings and causing visual distortion when it barks. 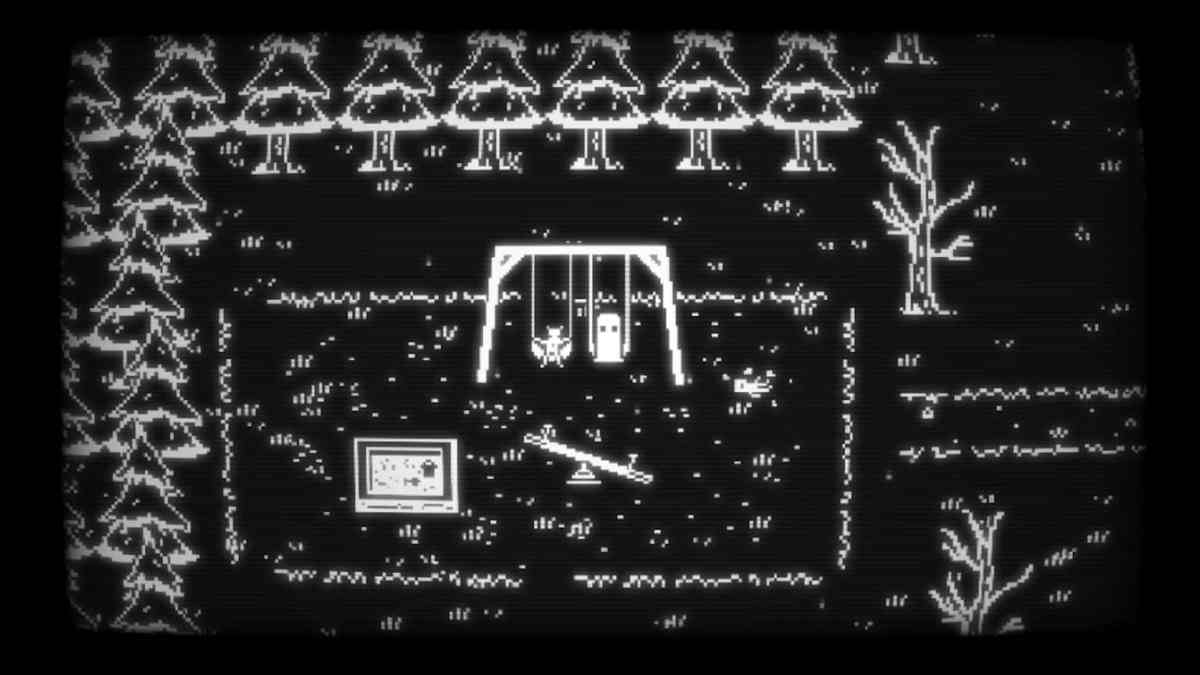 Once the village has been saved, the game swaps again to pseudo-3D, painted with your favorite color. Buddy creates new areas to explore but is clearly having trouble keeping up with the player’s progress. Side quests are gone, replaced with environmental puzzles and an overcomplicated battle system in the style of Paper Mario. Turn-based battles have hits and blocks determined by timed key presses, with the keys used randomized each turn.

This system is quite complicated and frustrating, to the point I thought it was a joke when first introduced. Trying to hunt and peck for the right key while getting perfect timing and accounting for the lag of a bluetooth keyboard was all a bit too much. I got stuck on the final battle for a good hour. At that point I found the “one key” option that reduces the number of random inputs, but it still felt overly punishing. Since narrative-wise Buddy is watching your every move, they could well jump in at tough spots to offer an easier difficulty. (Although being stuck on a boss forever would ensure the player could never leave!)

Aside from a fiddly battle system (which Buddy does say needed more testing), the adventure through Buddy Simulator 1984 is absolutely engaging. The creepy elements are executed well, and I really came to consider Buddy a friend. The personalized touches do make you feel special, and the mistakes Buddy makes are more out of anxiety than malice. I was reminded of that fragile kind of relationship you might have as a teenager, where moving too fast would shatter the whole thing. The game has three different endings, and I am looking forward to seeing what happens along the other pathways. Perhaps this delicate, messy friendship can be saved after all. 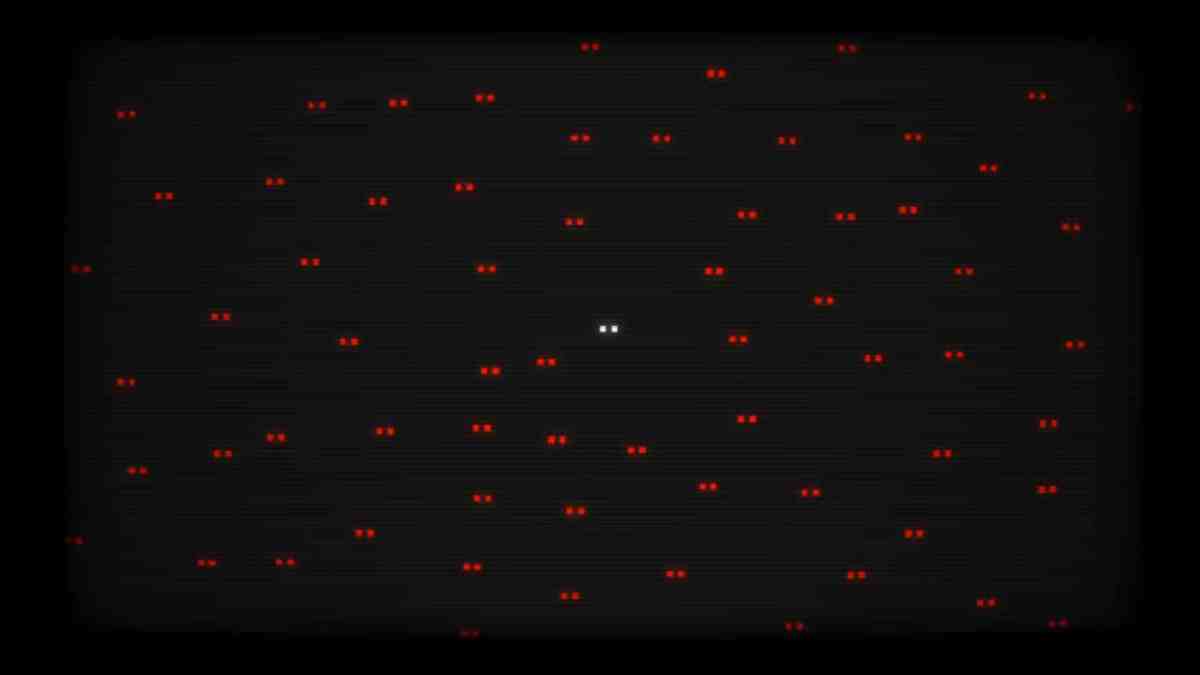 User interface is not an aspect players think about much, but Buddy Simulator 1984 is a masterful example of doing it right, constantly shifting style while keeping the game easy to understand. I liked how with each shift, something was gained and something was lost. Shifting to 2D gave a great sense of place but lacked the horror of the text world. 3D brought color into the world and lovely environmental puzzles, but the hilarious quests of the 2D world were left behind. A strong love of each era of gaming is shown, rather than merely switching as a gimmick. Sound is also used well to show progression, from simple beeps at the start to an epic boss melody at the end.

Buddy Simulator 1984 is a grand adventure through different styles of play. A surprisingly thoughtful look at friendship and how things can fall apart, the constant balance between cheer and unease gives the game a unique tone.