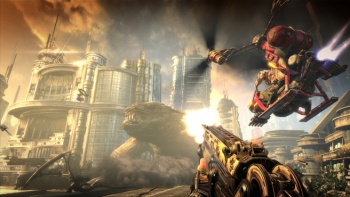 Refuting the scaremongering from Fox News suggesting Epic Games’ and People Can Fly’s latest title Bulletstorm may “make you a rapist” and could be particularly damaging to the fragile psyches of children, industry consultant and journalist Scott Steinberg says that maybe everybody (and by “everybody,” we mean the yellow journalists at Fox) should take a chill pill.

“[Bulletstorm is] an unapologetically and straightforwardly satirical game,” says Steinberg, “meant for discerning adults that’s written in the vernacular of the times and speaks in a cultural context that’s the same as that its target audience has long been indoctrinated in by mainstream media and pop culture.”

Citing examples of modern pop culture such as South Park and the Saw films, Steinberg suggests the current scare over Bulletstorm‘s vulgar content and over-the-top sexually-tinged violence ignores the fact that this kind exploitative fare has been a part of entertainment culture for decades.

“This isn’t the first blockbuster (or big-budget game, for that matter) to aim below the belt or slather on the salty language,” he says. “Yes, it’s shameless, but also knowingly so, because it actively aims to parody much of both the gaming field and larger cultural zeitgeist’s more asinine elements. The designers make no secret of their intentions, or to whom the title caters – The Oregon Trail, this isn’t. The giant M for Mature rating on the front of the box says it all: Only discerning adults need apply.”

As Steinberg notes, videogames are the current cultural whipping boy for so-called “concerned citizens” who would seek to eradicate media they find personally objectionable. Historically, any new media embraced by a younger generation has turned the heads of those youngsters’ cultural forebears, but what we’re seeing now is an altogether different issue. In spite of popular perception, videogames aren’t just for kids.

“The average player is actually a mature, discerning adult in their mid-30s,” says Steinberg. “The reality is that the vast majority of all games produced are perfectly suitable for children and adolescents. Bulletstorm just happens to be one of many that fall into the category of games for mature audiences, but it’s hardly among the more head-turning ones, as those who’ve played previous outings such as human prey simulator Manhunt 2 can attest.”

Stenberg suggest that the best way to handle adult-themed content is to keep it in the hands of the adults for whom it is intended, and that the key to alleviating the “threat” presented by this kind of content lies not in eradicating it, as many talking heads would suggest, but in proper parenting.

“The answer, as ever, lies in education,” he says. “Being acutely aware of what and how your children play, and the manner in which they do so, which requires maintaining an open-minded perspective and taking the time to spend time with your kids, their games and the systems which play these titles.”

Steinberg is but one of many videogame advocates and detractors sounding off on this issue. Between Bulletstorm and the upcoming Duke Nukem Forever, 2011 looks to be a very interesting year for the battle between concerned citizens and those who would make mature-themed videogames. This is undoubtedly only partly a result of the fact that we’re leading up to a major election year, and perhaps partly owing to the approaching due date for The US Supreme Court’s ruling on whether videogames are protected speech, under the First Amendment to the US Constitution. Anyone with even half a horse in this race (which is everyone) should probably buckle up.

“Videogames Cause Rape” Author Gets Amazonbombed