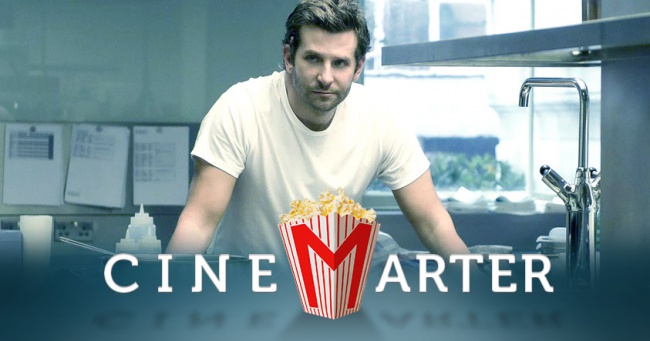 It’s so incredibly tempting to open up a review of Burnt – a film about the comeback of a “celebrity” chef – using a few cooking analogies, and Burnt certainly sets itself up for them. It contains the wrong ingredients, it’s unappetizing, and it’s a dish worth skipping – all of those are applicable when talking about this film. Burnt may not be the worst movie ever to be about a chef, but it is one of the slowest moving, and also one that has the least amount of consequences for its jerk of a protagonist.

I’m getting ahead of myself. Our lead is Adam Jones (Bradley Cooper), a formerly famous chef who spent the last few years drinking, injecting, snorting, and smoking his way to obscurity and debt. He’s now clean and he decides that he’d like to get a third Michelin star, a big deal in his profession. He manages to force his way into the kitchen of a hotel run by a former friend, Tony (Daniel Brühl), and begins to do just that, recruiting Michel (Omar Sy), who used to work with him, and Helene (Sienna Miller), whom he steals away from another kitchen, along with a bunch of other no-name cooks. 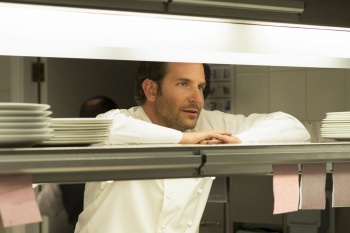 The rest of the movie lets us watch Adam be a jerk to almost everyone he comes across, all in the quest of attaining of that third star. There’s something compelling about watching someone strive for perfection, which is about the only explanation for why none of the other characters don’t bolt within the first fifteen minutes. Adam went to the Chef Ramsay school of cooking, apparently, because he’s temperamental, aggressive, verbally abusive, and all-around not a nice person. We struggle to tolerate this as silent observers; it’s hard to imagine trying to work within that environment.

There are two reasons for us to watch Burnt at this point. The first is to finally see the “perfection” get achieved, while the second is to see Adam get the comeuppance he deserves for his selfish, egotistical, and downright mean actions. Well, you get one of those, and it’s not the latter. The film tries to fake us out with the latter, it’s true, but soon enough we learn that, no, you can be a jerk and get away scot free as long as you’re really good at cooking overpriced food for rich snobs.

There’s a reason that its distributor decided to pull the limited release it was scheduled to have on the week before it opened wide: it wouldn’t have gotten any positive word of mouth.

The only reason that Adam is even close to an interesting character is because of his single desire for excellence. It might surprise you, then, that the film’s idea of a character arc is for him to, more or less out of the blue, decide that’s no longer a goal worthy of pursuit. No, seriously. The character we’ve watched for 90 minutes all of a sudden decides that he should be nicer and that he should trust his staff to do their jobs well enough that he doesn’t have to micro-manage a meal that he knows is going to the people who award these magical stars. No stars of your own for guessing how well that goes.

Outside of this, we get lots of quick cuts in the kitchen in hopes of drumming up the intensity that comes from cooking in a high-priced restaurant, some terrible melodrama outside the workplace, even more kitchen shots, a poor attempt at giving Adam a romantic relationship, a rivalry between Adam and Reece (Matthew Rhys) that eventually just goes to boost Adam’s ego even more, and an odd subplot involving Adam and someone who gives him counselling and takes his blood for drug/alcohol testing (Emma Thompson) – but apparently doesn’t matter when Adam goes through his eventual relapse. Very little of this is compelling, and it all comes down to us not caring about anything Adam does, except for what he can create in the kitchen.

Bradley Cooper is probably one of the best actors currently working to play the lead character, if only because most of his best roles have come from him playing smarmy jerks. He can be charming and nice, but mostly we believe him when he’s talking down to people and overreacting to mistakes. We don’t explore much of his psyche, and it’s not a “deep” performance, but that’s almost more of a screenplay problem than anything else. None of the other actors leave more than a minor impression, with Sienna Miller getting the second most screen time and yet struggling to do much of anything. It’s all about Adam Jones. We’re in his world, and we’re just along for the ride.

Burnt is a movie that sabotages its main character, gives us boring melodrama, and is a consequence-free environment in which being a jerk is perfectly acceptable as long as you have a modicum of talent. It’s slow-moving and gives its supporting cast relatively little to do. There’s a reason that its distributor decided to pull the limited release it was scheduled to have on the week before it opened wide: it wouldn’t have gotten any positive word of mouth. Burnt is overcooked, lacks spice, and you would send it back if you ordered it at a restaurant. See? I told you food analogies worked perfectly.

Bottom Line: Burnt is a slow-moving movie about a jerkish chef and his attempt to get a golden star.

Recommendation: While tastes may vary, Burnt is the cinematic equivalent of the Whopper – but a Whopper that also insults you as you eat it, making you feel bad about yourself. You’re better off skipping it.