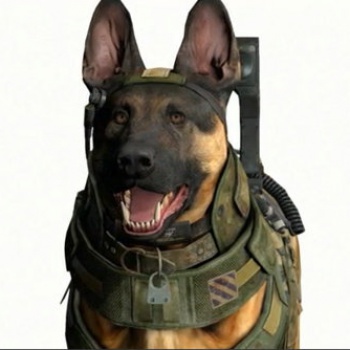 The team at Infinity Ward had no idea we would care about that mo-cap dog so much.

Every year brings a new Call of Duty, so it’s normal for those of us that cover the industry to be a bit ho-hum about each iteration. But when Activision unveiled the dog used to capture motion for us in its new Ghosts at the Microsoft Xbox One reveal a few weeks back, the internet went ablaze with memes and Twitter accounts all showing our love for the military canine. Mark Ruben, executive producer of Ghosts at Infinity Ward, admitted the team was taken aback by the response.

“No clue,” Ruben said when I asked whether they anticipated the frenzied reaction. “We thought maybe people would think the dog was cool, as a new squad member. We had no idea there would be Twitter accounts, any of that.”

I then asked what everyone had been speculating about: Will the dog die in Ghosts? “I’m not going to talk about that,” Ruben dodged. Of course, later on in the presentation, Tina Palacios the community manager at Infinity Ward said the studio was internally split on whether to off the dog.

“Half the team want it to live and the other half thinks he should die,” she said. I don’t know where I fall, personally, but the fact that the dog has a name – Riley, after an old COD character – makes me pause. When you control the dog in missions, it can be killed like any other player-controlled character but it’s a fail state which brings you back to the last checkpoint.

The sequence we saw with the dog was cool to watch, and Ruben said even its development was a happy surprise. The Navy Seal the team consulted with brought his unit’s dog and Ruben was blown away by the technical savvy the animal carried on its harness such as the camera and vibrating collar to give the dog stealthy commands.