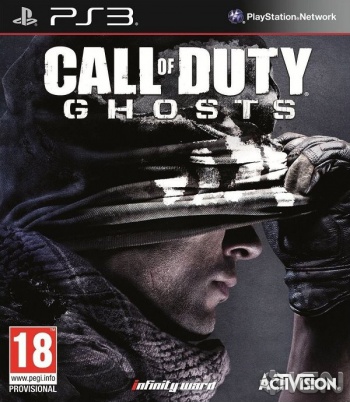 A preview of COD: Ghosts shows stealthy approaches on land, on a building and under the sea.

In a closed door presentation before the actual hubbub of the E3 show floor started, I was shown a sneak peak at a few levels in Call of Duty: Ghosts. Something happened to the U.S. in the near future – an event that no one at Infinity Ward will talk about, hello opening cinematic! – and the land the members of the Ghosts squad grew up in is gone. The first sequence shown was called No Man’s Land, and the team returns to a San Diego, California that has been completely blown away. Buildings hang on cliffs, and constant seismic activity pushes them over the edge. We saw a white church perched on a cliff, and it tumbled off into nothingness before us. The next generation hardware showing off all this scenery was extraordinary. It looked like a movie.

We saw how the squad interacts with Riley, the dog, and he is used in a variety of tactical ways. Using a ipad-like device, you can take control of Riley. You can send him in to flush out enemies the squad takes out with rifle fire, or use Riley to scout defensive positions for easy assault. You can even command him to bark, which will draw enemies to him and out of cover for easy picking. The sequence crawling through the bombed out remains of San Diego showed me that the team at Infinity Ward isn’t afraid to try new things with Call of Duty: Ghosts.

Next up was another slow assault, this time from atop a sky scraper in a South American city. Whatever happened to the U.S., hasn’t happened here, so the Ghost squad is clearly looking for payback. Using cable launchers, you rappel down the glass and steel building to take out heavily armed guards without you even knowing you are there. It’s a little laughable that a single line a dialogue – “The lights inside will prevent them from seeing us” – explains why the guards don’t notice the attacks before it comes, but it is just a presentation. This whole sequence also focused on stealth, with the team needing to get to a computer terminal to hack in some stuff before the whole building starts to blow up and collapse. Yep, you are in the building when it starts to fall. Crazy.

Finally, we go under the sea, but there’s no singing lobsters here. Just sharks. And guys with guns. The Ghost squad again has to sneakily swim around a salvage yard below the waves to take out an enemy ship with a hand-launched torpedo. The whole sequence is way different from anything you’ve played in COD before. With 3 dimensions, cover is meaningless if the enemy is above you. As your squadmate brother tells you, bullets don’t travel as fast underwater so it’s necessary to use a lot more fire to take down a single enemy.

There’s a lot of talking at you, the player, through supposed combat communication and producer Mark Rubens said this was intentional. “We are trying to make it less gamey,” he said. “With communication indicating your objectives more than onscreen messages popping up.” In fact, during the demo there was no UI elements on the screen at all. I personally didn’t enjoy the constant monologue of a squadmate telling you exactly what to do at every moment either, but perhaps the trade off of a UI-less experience is worth it.

Based on what I saw, expect Call of Duty: Ghosts to be a much different experience than anything you’ve had with previous COD‘s. The tech used in the next generation versions looks stellar, the storytelling is going in new and interesting directions, and there’s a dog.

I just hope they kill Riley off in the most heroic way possible, halfway through eating a filet mignon …