Once upon a time, I caught ’em all. I had every single Pokémon – every starter, every evolution, every legendary – from every generation of the series. My collection was complete; I was a true Pokémon master. 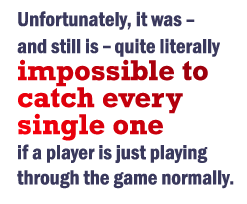 Once upon a time, I was a cheater.

I wasn’t always a cheater, of course. To understand my fall to the dark side, let’s jump back a bit: The year was 1998. Back then, I was just a collector – a completionist. If a game challenged me with any number of shiny trinkets to acquire, I wanted them. 120 stars in Super Mario 64? Can do. All the Jiggies and Notes in Banjo-Kazooie? You bet.

It was then that I learned about a new game – or rather, two new games – about to hit North America from Japan. Commercials for Pokémon Red & Blue Versions (and all the related tie-in products) flooded the airwaves, boasting 150 little (and not-so-little) monsters for the taking. Even from the beginning, though, it was a challenge that was all but impossible to complete.

At their core, the Pokémon games are all about capturing wild monsters, training them and battling with them. Though the series initially sported the tagline “Gotta Catch ‘Em All,” Nintendo never seemed inclined to let players do just that. With every successive “generation” of Pokémon games, the roster swelled with the addition of new characters: Gold and Silver versions (Generation II) added a hundred more to bring the total number of monsters to 251, and Ruby and Sapphire versions (Generation III) took it even higher, to 386 potential characters to catch.

By the time I cheated my way through Pokémon Pearl, the series was on its fourth generation, with a staggering 493 monsters in total to catch. If that were the only barrier, it would be a problem that could simply be solved with enough time and effort. Unfortunately, it was – and still is – quite literally impossible to catch every single one if a player is just playing through the game normally.

From the earliest days of Red and Blue, the franchise has divided its roster of characters up between the two versions. Most of the monsters are in both, but some are only found in one – whereas Red had the puppy Pokémon Growlithe, Blue had the fox Vulpix – and the only way to acquire them is to trade with another player who has the opposite version of the game. That wasn’t much of a problem in itself: If you were a kid in junior high school in 1998, it was a safe bet that you’d be able to find whichever version you didn’t have yourself among your classmates.

It was trickier to get the one-of-a-kind monsters found in the games. Every Pokémon title has you choose a special “starter” from three potential options, and whichever two you don’t select get cast by the wayside. There are also unique “legendary” creatures found in the wild that are important to the games’ storyline, and they can be the toughest to catch because if you fail, they disappear forever. Though difficult, however, back in the misty days of 1998 none of these trials seemed insurmountable to a young collector determined to succeed. With the right help, I could catch all 150 of those Pokémon! 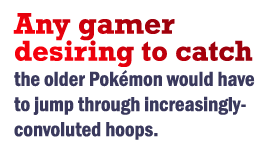 Except there were actually 151.

Mew, the secret 151st pocket monster – barely mentioned in the game – was the Pokémon series’ first impossible hurdle. Every other challenge was surmountable if you put in enough time and knew the right people to trade with, but Mew, the tiny pink psychic cat-thing, was only given out to people who attended rare official Nintendo events and could not actually be caught in the game.

Mew was the first “Event Pokémon” – a ‘mon that you could only obtain by physically being at the right place at the right time – but it wasn’t the last. With Generation II came the time-traveling Celebi, a legendary Pokémon which is still all but impossible to legitimately acquire outside of Japan thanks to a lack of those kinds of events. Generation III added wish-granter Jirachi and space alien Deoxys to the Event Pokémon list, but new technology was about to add a new hurdle for collectors. When Ruby and Sapphire moved to the GameBoy Advance, the current games were no longer backwards-compatible with the earlier ones, meaning that any gamer desiring to catch the older Pokémon would have to jump through increasingly-convoluted hoops.

Prior to the release of HeartGold and SoulSilver on the DS, a trainer who wanted to capture Ho-Oh would have to first fully complete Pokémon Colosseum (on the GameCube), transfer it to one of the Generation III titles (on the GameBoy Advance), and finally upload it to the Pal Park in Diamond & Pearl (on the DS). That’s three different games, on three different platforms – and that’s one of the easier ones to get. To this day, unless you made the pilgrimage to select Toys ‘R Us stores across the United States during a single week in November 2009, there is no legitimate way to catch the Pokémon god Arceus.

For a series that started its life under the catchphrase “Gotta catch ’em all,” the Pokémon franchise goes out of it way to make doing just that as complicated as possible. This would be like Mario 64 locking players out of obtaining the last few stars just because they’d never beaten Yoshi’s Island.

From the very beginning, the Pokémon games have been about socialization, and were designed to promote that. Not only were there different monsters in different versions, some of them only ever evolved into their strongest forms when traded. Developer Game Freak and creator Satoshi Tajiri wanted to encourage gamers to meet with their friends, trade and battle. You always could do it on your own, buying two Game Boys and two copies of the game – though that’s going against the whole spirit of the thing.

The diehard Poké-fanatics would spend the money on all the games and events in order to hopefully complete their Pokédex, but they didn’t have to. If one gamer collected Mew from an event, the gamer could (in theory) trade it to someone else, who could trade it to someone else – and so on. Like baseball cards or stamp collecting, including these ultra-rares should have encouraged gamers to trade, not prohibited it.

It’s more than that, though. Having these all-but-unobtainable Pokémon makes it all the more rewarding when you finally catch one against all odds. I think back to the summer I worked at the Pokémon Center store in New York City (now Nintendo World), where we had a special machine that would give out one of the rare legendaries – at the time, Jirachi or Deoxys. I remember watching kids from all over the country who rushed up to the machine with their parents in tow and hooked up their GBA, and I remember how overjoyed they looked to get their hands on this digital treat that they’d maybe heard about in school or online.

I cheated to get my Jirachi. I cheated to get my Deoxys. My friend let me borrow a hackable GBA cartridge that I used to whip up Pokémon from the aether and transfer them into my DS game, tricking it into thinking they were real. When all was said and done, I wore no such overjoyed expression. I’d manipulated numbers, that was all – and numbers were all I had to show for it.

There was no effort in what I’d done, only time spent. A machine or a clever computer program could have done the same thing. There was none of the thrill of a desperate battle as the legendary Pokémon resisted all of your attempts to capture it – and none of the elation when that Pokéball finally clicked shut. With no challenge in the catching, there was no reward. In my quest to be a Pokémon master, I’d ended up missing the point entirely, and done something I would have never considered doing in Super Mario or Banjo-Kazooie. I wanted to collect things – now, I merely had them.

Once upon a time, I caught ’em all.

I really wish I hadn’t.