Few games have what Castle Clash has. So why haven’t people heard of it? 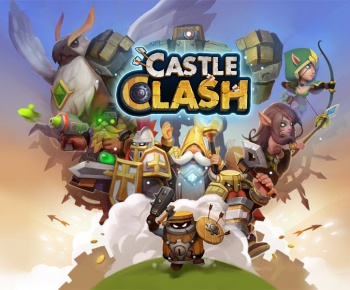 I have been addicted to Castle Clash since I first got my hands on it. You don’t often come across a game that is made of equal parts MOBA, tower defense, and city simulator. The game balances these disparate genres perfectly and makes a whole new experience that will keep you busy for hours on end.

The MOBA aspect is simple but enjoyable. Once you set the pieces in motion you are no longer involved in the fight. You get heroes that you can then send to the MOBA side of the game and have them fight other players’ heroes in the arena, where all you do is decide which path to send them on to destroy the other player’s beacon. The tower defense and the city simulator mechanics are the two things that got me interested in the game to begin with. With the tower defense, you take part in both sides of the battle. You have to build your city (like in SimCity,) with defense in mind as it may look nice, but be prepared for other players to try and destroy it and steal your gold. On the other hand you have to work on finding their weak spots and take out other people’s bases. All of this is made worth it when you are attacked and get to see just how they planned to defeat your castle. From there you can upgrade your walls and bunkers now knowing your weak areas.

Interacting with elitist players is a massive downside to the MOBA genre, but this itty bitty casual game makes the chat entirely voluntary. Chat is in its own tab and doesn’t pop up every message to pull you out of the game. Trying to learn how to play a MOBA can be daunting with the oppressive chat that belittles the “noob” and therefore keeps the game from growing. With this they avoid that whole situation and focus on the basics of the genre; you send five heroes down three lanes. They will fight, but once you have sent them on their path, they are free to win or lose on their own – your involvement is done once you click start.

Fighting other players’ castles is definitely the most fun in the game. Castle Clash doesn’t limit the number of times that you are able to attack their bases, so you can keep going as long as you have mana to recruit more troops. You are given a choice of troop types that you can then upgrade and use to defend and attack. The same goes for heroes, which can be earned in the game and then used in the MOBA or Arena areas, which is where you send your heroes against other players’ heroes. There are at least twenty different heroes that you can acquire and use. They range from casters that look oddly like Orko to pandas that may have just come from Pandaria. Use them wisely, because they all have their own special trait that you can exploit. My favorite hero is definitely the Serpent Queen, as she has an AOE attack that poisons enemies, plus a ranged attack that will affect everything in the area, including buildings.

Now I may not be playing this game in a month, but that’s the curse of casual games. They are amazing, but need more attention than I’m willing to give most of the time. Since Castle Clash has had my attention, my poor Simpsons: Tapped Out city has since gone to the birds, joining so many casual games in that pile of lost interest. That pile is growing and includes some seriously popular games. Having my phone as my main source of casual gaming has introduced me to many games that I would not normally play, like Castle Clash. There are also games that are entertaining as well as intellectually stimulating, like Flow, a great game that works on your hand eye co-ordination, as well as games that I loved but now are available to me on the phone, like Tetris. Casual games get a bad rap from most serious gamers but we’re legion and nothing’s going to stop us.