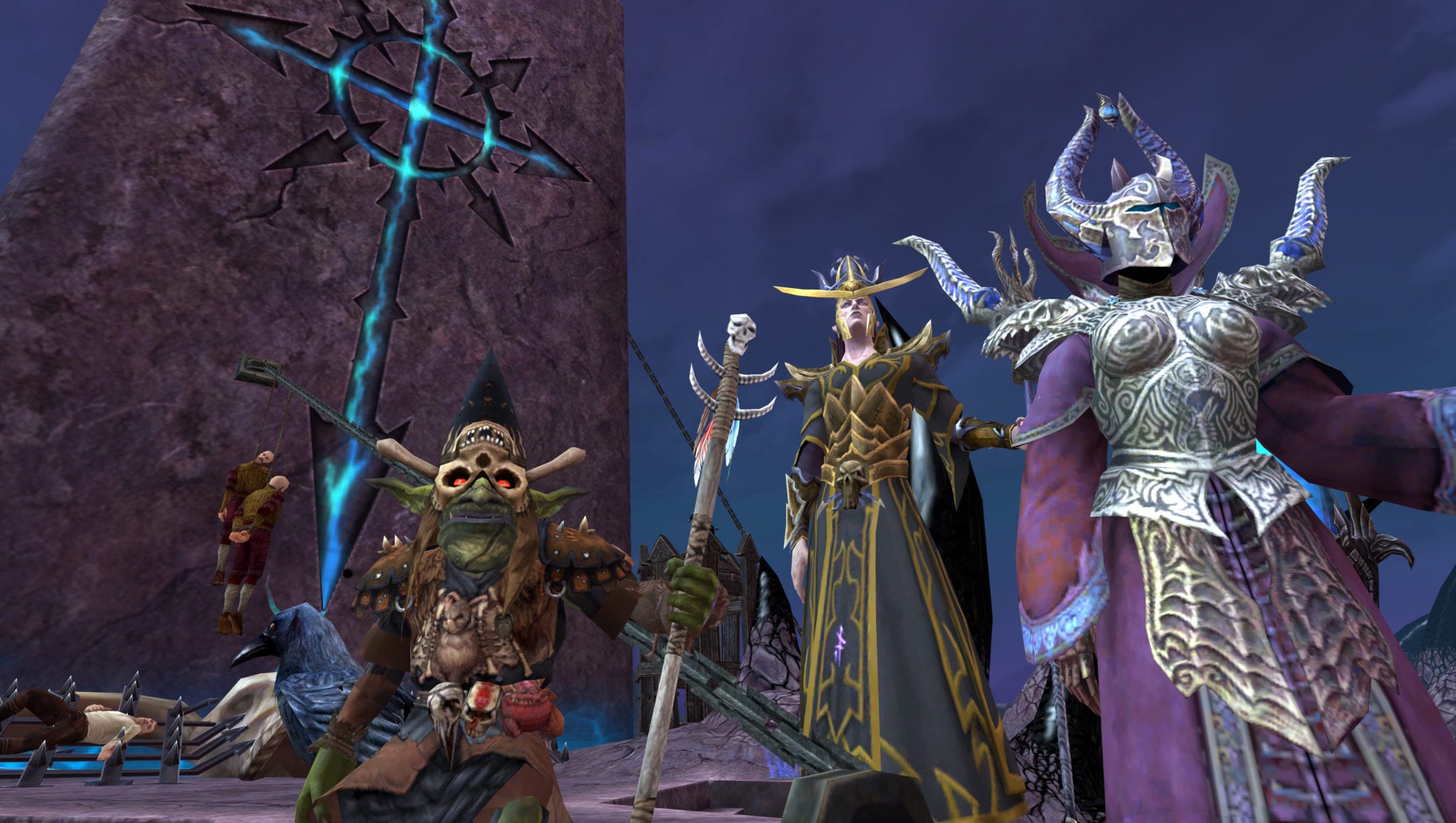 Disclaimer: Jeremy Monken is a former employee of Electronic Arts who was kind enough to share with us his story of working at Mythic Entertainment during the final days leading up to the launch of Warhammer Online: Age of Reckoning. As a former employee of EA, he is not at liberty to discuss any proprietary technology or internal conversations. The information presented in this article is his opinion, or was taken from news sources external to EA, or was made public by Mythic Entertainment or Electronic Arts. It is also one hell of a story. – Ed.

It all started, as so many things do these days, with an email. I was a game reviewer for a D.C. newspaper, so my inbox was usually filled with press releases, industry announcements and other gaming news. One morning in October 2006 a message caught my eye: “Check out the studio as we celebrate 100 days of EA Mythic.”

I didn’t need much convincing. A few days later, I spent an afternoon at the Fairfax, VA, developer to see what they were up to. They showed me around, showered me with swag and treated me and a few other gaming journalists to an interactive demo of their latest project, Warhammer Online: Age of Reckoning. As we toured the studio, we walked past the customer service room. Before me were desks strewn with toys and fake weapons, rows of computer monitors with eclectic backgrounds and charismatic Gen Y nerds toiling in active digital worlds. It seemed like a fascinating work environment and somewhere I would fit in.

Two years later, as Warhammer Online finally went live, that dimly lit hall of flickering screens would be my workplace – if only for a few months.

In 2008, after almost four years reviewing games and covering industry news and events, I lost my job. In my search for new work, I came across a posting for QA/customer service jobs at Mythic Entertainment for Warhammer Online: Age of Reckoning. I didn’t have much of a technical background aside from being a lifelong gamer, but I had a few years of customer service experience, so I shot them a resume. I heard back a month later and started at Mythic a week after that.

I didn’t have much in common with my fellow recruits. There were computer scientists and programmers, a charming handful of intense Hot Topic-styled anime fans and a surprisingly large number of ex-military. Then there was me, a graphic designer and journalist who played primarily single-player console games. We were a ragtag crew united by a common purpose: to work at a genuine mainstream game studio. We would be CSRs (customer service representatives), invisible, floating beings of power who kept the peace and righted the wrongs in a digital world. Like the Avengers wrapped in the Justice League with a dash of the A-Team. Best of all, we would be getting EA checks and benefits for what boiled down to constructively using cheat codes.

The Day of Reckoning

The start of open beta came faster than anyone expected. Someone flipped a switch, and instantly these digital worlds became populated. Tens of thousands streamed across Altdorf and The Blighted Isle, with Bright Wizards setting things on fire and Greenskins looking for things to smash or cover with filth.

While we weren’t the designers that personally breathed life into all the quest-givers and monsters, we still felt like we were a part of something truly impressive. It was their baby, but we were charged with taking care of it. To the players, we represented the developers and the company as a whole. To the development team, we represented the interests of the players. It was like being a UN peacekeeper, caught between the powerful warlords and the huddled, unwashed masses.

As the game went into full commercial release, the entire building celebrated. The reviews were almost universally favorable, and after earning “Most Anticipated MMO” and “Best of E3” accolades from various publications, our pre-order numbers were well beyond expectations. My fellow CSRs speculated about how we would handle all the customers with just this one enormous room of people. Maybe we would get our own floor? Our own building? An office park?

Everything was perfect; we all knew we would be promoted to development within a year. I would be scripting quest chains and have my own toy-filled cubicle on one of the cool floors. It seemed, to all of us, as if our dreams had finally come true.

This is where the villain of our story comes in. Enter the Lich King. Our release date put Warhammer Online: Age of Reckoning on store shelves about two months before the long-awaited expansion to WoW, the biggest, most popular MMOG of all time. My coworkers, many of whom were loyal, max-level Blizzard fans, assured me that it wasn’t a big deal. They acted as though gamers had room in their hearts and on their hard drives for two Orcs-and-Elves fantasy MMOGs with roughly the same gameplay. The people around me spoke with such optimism and confidence that I assumed they knew what they were talking about. I was a console gamer; what did I know?

That optimism made for a great work environment. Huge groups of us ate lunch together. People spent their breaks playing Rock Band in the console-filled break rooms. Someone would shout some Simpsons quote or reference a bizarre internet meme and everyone would laugh. We all shared the same interests, and the atmosphere was so positive and safe that everyone felt like these were the people they were going to be with for a long, long time. Many of them were wrong.

The news started coming through the usual channels – gaming blogs, rumor sites – that EA was losing money and layoffs were inevitable. Not because of us, however; we were still way in the black. With well over a million pre-orders alone, everyone who bought the game would theoretically shell out at least a couple months’ worth of subscription fees. At Mythic there were catered lunches, launch parties and logo-stamped mugs and t-shirts for the whole staff. Nobody seemed worried. EA might have been in trouble, but here, at Mythic, we were safe.

Way Too Much Corn

By December, paid subscriber numbers for WAR had dropped from a reported 800,000 to fewer than 300,000. We quickly learned we weren’t immune to EA’s company-wide layoffs as two rounds hit my department and familiar faces disappeared.

The first to go weren’t surprises. CSRs that were less adept with the software and less able to deal with customers stopped showing up. It was the third wave that had most people updating their resumes. People who had become our friends and mentors – guys whom we would all ask for advice or help with difficult issues – got cut. It became obvious that nobody was safe. The party was over.

Our department became more spread out as our neighbors were sent home. Most of us avoided speaking with our former coworkers lest we remind them of what they lost or remind ourselves of what was coming. It was a sad, lonely atmosphere. Every blank monitor was a gravestone.

At Christmas, the company provided a catered meal for the CSRs who had to monitor an in-game event and work through the holiday. I don’t know if our bosses just ordered what they usually did, but the surplus of food made it seem like our department’s slow decline had gone unnoticed. There was enough food for an army, but only a handful of us were left. For weeks afterward, the break room fridge overflowed with unopened trays of leftover corn. It felt like an offering left to appease the layoff god. Maybe this delicious corn would sate his mighty hunger.

Every round of layoffs was followed by assurances that no more would be needed. Within hours of each bloodletting, we were assured that we had nothing to worry about. It broke my heart, because I could tell the ones tasked with giving that information – management and human resources – were just as scared and uncertain as the rest of us. They hired us, they trained us and now they were forced to say goodbye. They weren’t just losing valued employees – they were losing friends and needed assets.

End of the Road

By January, the team’s optimism was ancient history. Our game had been beaten into submission by gold farmers, cheaters and WoW‘s new expansion. Every GameStop and Best Buy I visited had buried WAR deep on their shelves. It seemed like the world had forgotten about us and our promising new game. And if the overall dread of getting laid off and losing the chance to be a part of the gaming industry wasn’t bad enough, we all knew the waters of the job market we would be tossed into were dark, cold and shark-infested. There was no more laughter; everyone just kept their heads down and did their jobs.

In February, the Big One finally hit. This one was supposedly due to the parent company’s financial woes, not our subscription numbers – those had actually stayed fairly constant for the last few months. People from every department left the building in groups as large as the one we trained with just six months before – and I was among them. I was stripped of my godhood and cast out to walk as a mortal, never again to fly around helping players and punishing evil. In the real world, I was stripped of my income and forced to employment-grind, seeking random tasks from strangers.

I still visit the lands of Warhammer occasionally. I doubt the subscription numbers will ever be what they once were, but fresh content, new Mac compatibility and news of a merger with BioWare give me hope that Praag will burn for years to come. My friends and guildmates have left, but the servers remain populated with familiar faces that I used to watch over. I miss the days when all these misanthropic marauders worshipped me as a god, but I’m happy knowing I had a part in shaping the future of this world. For now, I’ll just have to equip my strongest resume, ready my suit and tie buffs and proudly broadcast “Looking For Job” in every public channel I can.