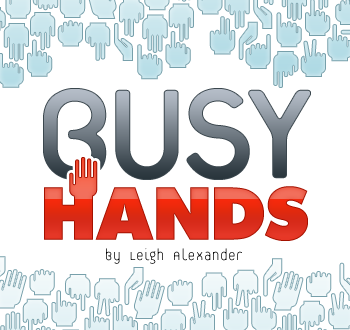 In my first article ever here at The Escapist, I said that Kana, Little Sister — a Japanese story-driven sex game about a boy’s feelings for his disease-stricken little sister — had one of the most impactful stories of any videogame I’d ever experienced. Years later, no matter how great the strides I’ve seen more traditional games make into immersion and more sophisticated storytelling, I still feel that way about Kana, unwieldy bits and all.

And I still spend a lot of time thinking about why that is. In the past, I had a number of theories, and one of them was this: Videogames are designed interaction, and in eroge games, the only interaction that is designed is courtship, the only objective is sex. These are games about relations between people, which leaves dialogue and story a massive, yawning plain to be explored and filled. A certain richness of dialogue is essential to gameplay, whereas in games where the interaction is simpler – say, conflict – and the objective is more complex (save the world, accomplish a variety of plot-based missions, et cetera), story can languish and the game experience won’t directly change.

I also thought, talked and wrote about how the two supposed “constants” of human existence are sex and death, and that in an environment where video games had the “death” part down so well, it was curious not to see games explore sex and sexuality more. It’s that old bit of funny business about how bloody murder is routine in mass media, but a pair of bare breasts are taboo.

So yeah, while I wouldn’t quite call it a fixation, I’ve spent a good share of time thinking about what sex can bring to games, and all the fashions and reasons I wished they’d stop shying from it. ¬It wasn’t until a bit later on that I realized that I was even more interested in what games can bring to sex – and by extension, many other things we don’t always feel comfortable talking about, since you can’t scratch the surface of the topics of either sex or violence without hitting a vein of human psychology.

Games are play and escapism, and the ways we play say a lot about us. They’re also forms of communication and expression – statements of the intention of an artist or group of artists, or vehicles for us to communicate in action and abstraction amongst ourselves. At the best of times, playing a really immersive game can feel like a private conversation with oneself. And nothing delights me more than when that conversation pushes my comfort zone, whether that’s with what I ponder about myself or about us as players.

That’s why I’m super excited to begin this new column here, and share those thoughts and those conversations with all of you, on all things titillating, creepy, dark or unnaturally lovely in interactive entertainment. Each month, we’ll visit a different offbeat game and dig in, in a search for the undiscovered threads of sentiment and experience we might miss when we avoid talking about things that confuse or us or make us uncomfortable. Sometimes we’ll find singular moments of value easily overlooked in traditional games, too.

If you’re fond of phrases like “it’s just a game,” or if you’d prefer to take the direct route through your relationship with games – aim, fire, next! – then this probably isn’t a series of articles you’ll enjoy. But if you’re one of those that’s interested in seeing games strain against their traditional bounds, then stay tuned. I recently learned about just how powerful alternative, sexual videogames could be when I curated an exhibit at Brooklyn’s Babycastles arcade and found myself fielding tons of locals, curious non-gamers who were prepared to see games as art pieces, as something, anything other than what they’d expected.

This time, we don’t have to look very hard to see evidence that audiences are interested in games that promise a dark, complex portrayal of adult sexuality. Just look at the pre-release period for Catherine, which launched earlier this summer. Featuring anime art and a number of surface stylistic similarities to the Persona games, such as the music of composer Shoji Meguro, early info was an unsurprisingly-easy sell to fans of Japanese RPGs and other games by Atlus – even before anyone knew what kind of gameplay Catherine would have. 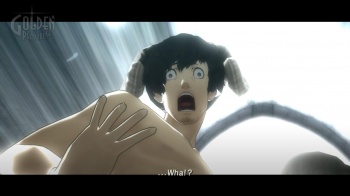 Interestingly though, players from outside that niche audience also took interest in the title. And it’s easy to say that “boobs” is the reason. The sexuality of Catherine is nearly an aggression on the eye, and pink-skinned, goldilocked art of her featured heavily in promotional materials, to the point where the fact there are no actual sex scenes in Catherine was considered a minor news headline in some circles when it came to light.

But while some of the early hype may have simply been a consequence of the old “sex sells” principle, I prefer to believe gamers were exceptionally attentive to Catherine because of the promise it seemed to make with surreal dream images and the presentation of a deceptively-complex romantic choice: That it would be a “mature” game in the truest sense, that it would deal with adulthood and sexuality – less that there would be attractive women on display therein.

How well the final product actually delivered on that promise is probably an entire new column on its own, but gamers are ready to see games deal with human darkness, adult sexuality and the modern relationship conundrums of today.

My favorite thing about Catherine is how well it takes its place in the media landscape: If the art a society produces is a reflection of its emotional state or mindset, then right now we’re obviously in the midst of re-evaluating what shapes relationships can take and what commitment ought to mean.

In contrast to the era of our parents and grandparents, our adulthood sees people living longer and getting married later, and it sees personal fulfillment as more important than finances or duty. Our values have shifted to admire the single woman – and the single mother – as figures to admire rather than to pity. Adulthood’s no longer defined by a traditional progression of marriage, parenthood and career.

Just this year, several films have come out that reflect all of those new ways we’re thinking about social roles: Crazy Stupid Love, on the true complexity of the romantic life; two movies, Friends With Benefits and No Strings Attached, about commitment-free sex relationships with pals, and Bridesmaids, which was lauded for the ways it showed that women are just as likely as men to get disastrously wild before wedded bliss, are just some examples. The Change-Up swaps a bachelor with his wedded-father friend, as if to admit that whether commitment is better than freedom is a question many men consider unanswered.

And right along with them came Catherine, showing an adult man dealing with the same uncertainties. When gamers saw glossy, sexy anime women, they were drawn in – but the real victory for mature gaming that Catherine achieved is how it reflects the unspoken anxieties, the broad social questions and truths, of the world in which we live.