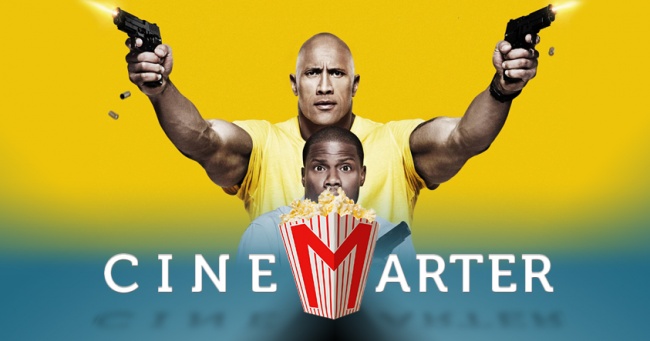 I’m all for movies with great characters, thoughtful themes, interesting plots, and entertaining action sequences, but there’s something to be said for leaving well enough alone when only a couple of elements are working. In Central Intelligence, for instance, the only success the filmmakers manage to generate come from the two leads, Kevin Hart and Dwayne Johnson. Whenever it tries to do something else – tell a generic spy story, relay points about overcoming past trauma and fixing your life if you’re unhappy with it, tease us with double-crosses, or thrill us with shootouts – it feels like those elements just get in the way of what we’re enjoying.

The plot is silly and should be inconsequential, but the film hopes we care. It sees two former high school classmates team up to get a MacGuffin that’ll stop terrorists from doing something that might impact someone sometime. Bob Stone (Johnson) was a perpetually bullied overweight geek, and now looks like The Rock, while Calvin Joyner (Hart) was beloved by all and is now an accountant. Stone’s in the CIA, and he enlists Joyner to help him solve a case – all while other CIA agents hunt them down, claiming that Stone’s gone insane, murdered his former partner, and is working with the terrorists for his own profit. 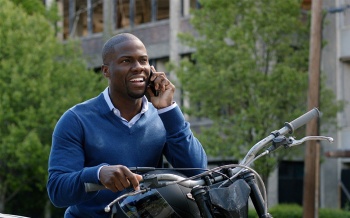 It’s the type of story that wants to have twists and turns and leave you guessing, but you’re not going to care enough for it to work, and you’ll have forgotten most of it by the time you exit the cinema. You’re here to watch Dwayne Johnson charm and laugh his way through a buddy movie with the hyperactive and frequently confused Kevin Hart. When that’s all that’s going on in Central Intelligence, that’s when the film is at its best.

With that said, though, most of the jokes are of the small, chuckle variety, and you’ll be forgetting most of them shortly after it’s over, too. Hey, maybe that’ll make it a more rewatchable comedy – since you won’t remember much of it on a revisit. There aren’t many big laughs, though, and even the chuckles start to lose their frequency as the film progresses and eventually slogs its way to the conclusion – a predictable and anticlimactic finale if there ever was one.

While there was a lot of effort put into it, and the filmmakers are hopeful that it’ll be funny, it only intermittently works.

Central Intelligence also doesn’t do a whole lot else well, which is probably why it hurts so much to take us away from the Hart/Johnson duo. The action is pretty dull – various shootouts where all the bullets miss unless it’s required to move the plot forward, and even then, just rarely and barely – the main themes are awkwardly handled, and the film almost literally has to pause to hammer them in. The only thing that’s consistently effective is watching Kevin Hart and Dwayne Johnson banter with one another. Have them both host an episode of SNL and you’ll have comedic gold. Force them through a bland spy plot and you’ve got a moderate – at best – success.

However, when it is just Hart and Johnson going back and forth with one another, Central Intelligence is funny. The two have good chemistry, they both have strong comedic timing, and the writing contains lots of jokes. Seeing The Rock in a unicorn t-shirt and a fanny pack might be worth the price of admission in its own right. Amy Ryan‘s CIA agent has a couple of moments, while Aaron Paul is someone whose purported talent is something I’m still waiting to see captured in a movie. There are a couple of cameos scattered throughout that I won’t spoil. They’re okay, but nothing special

Maybe the best way to sum up Central Intelligence is to relate it to a moment in the movie, which sees The Rock’s face superimposed onto Sione Kelepi‘s very naked body. While there was a lot of effort put into it, and the filmmakers are hopeful that it’ll be funny, it only intermittently works. This isn’t a lazy movie, and it’s one that isn’t even bad enough to recommend avoiding. It’s forgettable and only really works when it gives its leads room to do their thing; when it tries to smother them with a plot, action, or tacked-on themes, it grinds to a halt and becomes a chore to watch. There are laughs – even a decent number of them at times – but they’re mostly small chuckles, and there aren’t enough of them to justify the 107-minute running time.

Bottom Line: There are some laughs here, almost all of which come from Kevin Hart and Dwayne Johnson, but the film keeps putting obstacles in the way of getting to them.

Recommendation: Central Intelligence is a good rainy weekend kind of movie, but nothing much more than that.