Go to a website like moddb.com and you’ll come across mods for hundreds of different games. User-created content like these game mods greatly extend the life of games and helps build a community of like-minded fans. However, before would-be game designers dug through lines of code and modeling programs to make their own mods, dungeon masters were etching out their own tombs of horrors on graph paper. As one of the first easily-modified game engines, Dungeons & Dragons allowed players to customize their experience as much as their imaginations would allow. Just like the experience point and the class system, D&D can also claim moddable, user-generated content as its progeny.

If you are reading this site, chances are you’re probably familiar with Dungeons & Dragons creator Gary Gygax. What you may not know (unless you’re a regular reader of this column) is that the game that became D&D started out as a mod to Chainmail, one of several popular tabletop wargames in the 1960s and 70s. These games largely revolved around historical conflicts, with Chainmail specifically recreating medieval battles like those that took place in the Crusades.

High fantasy generally hadn’t been explored too much in these games, but that didn’t stop Gygax from publishing a “fantasy supplement” which contained rules for fighting armies of monsters and recruiting wizards who could sling fireballs across the battlefield. Not only was this an evolutionary step towards Dungeons & Dragons, it also served the same purpose of many of today’s mods: It explored different gameplay possibilities using a preexisting game engine.

D&D quickly became a hit after its release in 1974 and won many converts to the new world of RPGs. Among them were many fans who thought they could do a better job with the rules than Gygax and soon began expanding upon and adding their own flourishes to the maker’s rules. The boom of fan-created D&D content occurred shortly after D&D‘s parent company TSR published “The Temple of the Frog,” the first role-playing game scenario and a precursor to such modules as “The Temple of Elemental Evil” and “Keep on the Borderlands.” By this point, many role-playing game enthusiasts were well-versed with creating their own game content; now that people were making money printing their own adventures, why shouldn’t the fans jump on the bandwagon?

Where there was a need for more content, the fans went to work and several upstart companies were created to provide unlicensed, home-brewed supplements for D&D. The book “Heroic Worlds: A History and Guide to Role-Playing Games,” recounts the story of Bob Bledsaw, an early D&D fan who founded the “Judges Guild Journal” newsletter to provide additional D&D material. In the days before Web sites, the Judges Guild Journal provided a community of gamers with a source of additional rules and scenarios created by their fellow gamers. Bledsaw eventually produced his own line of scenarios, starting with “City-State of the Invincible Overlord.” Though Bledsaw didn’t have the permission to use the “Dungeons & Dragons” name, his scenarios closely resembled – and were easily compatible with – Gygax’s game. Bledsaw’s products did not match TSR’s in production value or sophistication; nonetheless, fans hungry for more adventures ate them up. 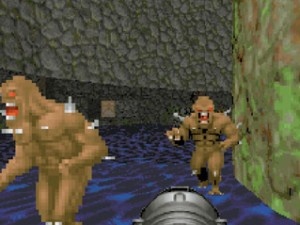 If this had taken place in the modern gaming era, these fan creations would have most likely been embraced by TSR. Unfortunately, Dungeons & Dragons was treading new ground in more ways than one, and it seems that the game’s own creator did not know how to react to players, people who weren’t even professional designers, editing his work. Gygax actually wrote several articles in “Dragon,” D&D‘s official magazine, expressing his disapproval of playing the game in any way other than the rules he had written and his distaste of what he thought to be amateurish fan-made products.

Whatever bad blood existed between gaming and fan content has largely been lost in the transition to the digital age. One of the first commercially successful games to feature extensive modding was Doom, developed by id Software and programmed by John Carmack. Whereas Gygax was protective of the rules governing his game, Carmack was eager to let aspiring game designers tinker with his work. Carmack made the source code for Doom freely available for download, which quickly led to fan-created level editing programs.

Later, Carmack would license his Quake engine to other development studios so that they could create their own titles using the game engine he had created. In 2000, four years after Quake‘s launch, the third edition of Dungeons & Dragons, now owned by Wizards of the Coast, would release the Open Gaming License, giving aspiring gamemakers the same tools to make their own content that Carmack had with the Quake engine.

It had been another software designer, Richard Stallman, who had given Wizards the idea for the OGL. Stallman, founder of the free software movement that eventually gave birth to Linux, believed that the best way for programmers to get good software was to let everybody have access to the program’s code. To that end the OGL, compatible with D&D‘s new d20 rule set, let players publish any product they wanted using the game mechanics: They could change or add their own rules with the only catch being that the content creators had to let everyone else use their rules as well.

The OGL was also a direct response to the more draconian policies used by TSR in the 70s; by discouraging players to share and create content with each other, D&D had forced players away from it. Just as Carmack licensing the Quake engine led to the creation of games like Half-Life, the d20 rules led to the creation of acclaimed games such as Green Ronin Publishing’s Mutants & Masterminds and Malhavoc Press’ Arcana Unearthed. The idea was that since D&D was the most popular tabletop role-playing game, if more products used its rules it would mean more people would be likely to buy D&D books. As most mods require an original copy of the game they’re built on to run, the d20 system and OGL would ideally encourage players to pick up D&D‘s core rulebooks such as the Player’s Handbook. 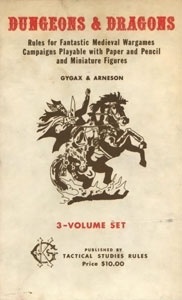 At this point D&D, the progenitor of modern video games, had finally caught up with its offspring – and much like modern game companies, some fans felt it had started to focus more on the bottom line than consumer loyalty. The recent controversy over Modern Warfare 2‘s lack of dedicated servers – and more relevant lack of mod-tool support – is still fresh in a lot of gamers’ minds, and a similar debate followed the Fourth Edition of Dungeons & Dragons, released June 2008, and its successor to the OGL, the Game System License. Some fans, former Wizards employees and OGL game publishers see the GSL as being needlessly restrictive. Of particular note is Sean Reynolds, a former Wizards employee who wrote that the GSL appeared to be engineered to stop people from making any third-party supplements and competing with Wizards.

Perhaps in this manner digital add-ons have surpassed Gygax’s creation. Video and computer game modding is a constantly growing field and unlike Bledsaw’s early efforts, today’s modding teams are sometimes as professional as the studios whose games they’re expanding. Epic Games is currently wrapping up its “Make Something Unreal” contest, which had mod teams from across the world creating new maps, weapons and stand-alone games using the Unreal Development Kit. Mods created included third-person zombie shooters, portal guns and even a snowboarding game. The best mod teams took home up to $10,000 in prize money.

Now we have games where the entire purpose is built with user-generated content in mind. Titles like Little Big Planet and Mod Nation Racers are constructed around the idea of players having access to the same set of tools as the designers and dreaming up their own uses for them. Campaign and level editors have been commonplace in PC games for a long time now, from Doom to Dragon Age, and even a lot of old games still see fresh content from their dedicated fans. D&D players should know best of all. They’ve been churning out content for their game of choice for the past thirty-plus years, and despite what anybody else tells them, they’ll keep doing it for years to come.

Robert Stoneback is a freelance writer who currently lives on a field in Pennsylvania surrounded by stray cats, game dice and broken video game controllers. He can be reached at rstoneback@gmail.com or through his community blog at 1up.com.