As I mentioned in the review, Nier is one of those games that lets you enter the name of the main character at the start. The sort that’s incredibly easy to make sound stupid. Like by naming the hero “I say” so all the characters sound like Foghorn Leghorn, or “me duck” so they all sound like middle-aged aunties from Yorkshire.

These games tend to walk a bit of a line if they want to do this. There were no problems at all back in pre-PlayStation days when games generally wouldn’t have much voice acting and the player-inputted strings could be easily inserted into the dialogue boxes, but now it rather hamstrings a game into either not having voice acting or writing the spoken dialogue so the characters never actually say the main character’s name. Which always tends to come across as a little bit weird when you’re dealing with the most important person in the plot, as in Final Fantasy X. I’ve also seen a few insert-name-here games that have both voice acting and subtitles, only putting the main character’s name in the latter. Which also comes across as a bit weird, or at least that they weren’t paying the transcriber enough.

If you ask me it’s a pretty strange practice to have survived this long, especially in games like Nier and the vastly more popular Square-Enix franchise mentioned above. It seems like something you’d do as a roleplaying thing, which is fine when protagonists are voiceless, generic sword-swinger types whose job is to react po-facedly to all the horrors of the universe. But when the main character is fully characterized with their own voice and personality, what’s the point? There’s no roleplaying to be had. All you’re doing is pissing off the dialogue writer.

But there’s one bit in Nier that really jumped out at me. Really gave me pause for thought. In a scene towards the end of the game, suddenly, out of nowhere, in a moment of high tension and massive angst, one of the characters said my name out loud.

Actually I’m not 100 percent certain that they did. It definitely appeared in the subtitle, but the actual sound was somewhat drowned out by background noise, and the character was saying it in a small, heartbreaking half-whisper because they were about to die in an incredibly spectacular fashion. The conditions would have been ideal for disguising the limitations of a voice synthesizer. Then again, they could just as easily have been saying any vague bundle of syllables and hoped my imagination would fill in the blanks, in the same way you’d cover up not being completely certain of someone’s name by pretending to cough as you address them. But the point is, I thought I heard my name. And that turned an angsty scene into a somewhat more emotionally compelling one. All in all, I somewhat regretted naming myself Twattycake.

It makes me wonder why more games don’t do this. That is, adding the player’s inputted name to the dialogue with some kind of voice synthesizer. The characters in Animal Crossing all spoke in this terrifying high-pitched gibber that was slightly influenced by the text and you’d sometimes catch something that sounded a bit like the name you’d given them, but the less said about that the better. There have been games that let you choose from a list of names that the voice acting all allows for, like Fable, but it still didn’t strike a chord the same way a personal preferred name would have.

I’m fairly certain voice synthesizers can’t use up that much memory, but the major problem I suspect is that anything said with one sounds like a passive-aggressive space harmonica who only learned English yesterday from a manic depressive Vulcan. But there are no problems, my friends, only opportunities. How’s this for an amazing idea: You make a sci-fi RPG where your character is followed around by a helpful support robot who carries your equipment and offers helpful advice and tutorial messages when necessary. And every time your character is called upon to introduce him or herself, the robot interrupts them. Perhaps it’s been programmed with the eagerness set too high. You could even make a running gag out of it. Like everyone except the robot finds it impossible to remember your name.

The remaining issue is that some dickheads will inevitably attempt to enter a name like “Qqq%kblk.” In which case you might want to make the player choose from a list of syllables with one consonant and one long or short vowel, so Yahtzee would be yaa-tu-zee and Brian would be bu-rii-un. Except that would sound really unnatural so maybe also voice act a load of the most common names in case people pick those. And the developers would also need to get all the different syllables voiced with a variety of emphases and emotions for the various situations the name might be read out in. Or alternatively just call the guy Frank.

“One thing you probably didn’t know about this game (and I only knew about from getting a good laugh on a forum posting comparison pictures) is, while you praised the game for having a hero that wasn’t a typical JRPG androgynous teen, here’s Nier from their [the Japanese] version: 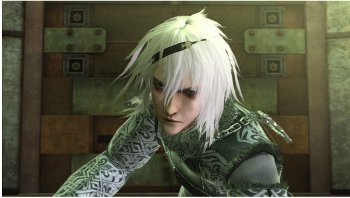 The worst part is it’s the same game except the dialogue was changed so you are a teenage boy trying to save his sister, rather than an older man saving his daughter. So yes, an hilariously cliche, more horrible version of this game exists.”
– Robert Riter, via email

Aw fuck, really? Suppose I should have suspected something like this, we wouldn’t want anyone to think we’re willing to take a risk on something different, would we? What is it with JRPGs and white hair, incidentally? Every member of your party in Nier has white hair, it’s like a delivery of fetish gear got mistakenly delivered to the geriatric ward.

OK, maybe it’s a little patronizing to switch out the emo pisspants above for a traditional chunky barbarian type, like that was the only aspect a Western audience might have trouble with, but at least the effort is there. And I actually kind of like the idea of releasing several versions of a game with a different protagonist in each one, so everyone can pick according to personal taste. For example, perhaps there could be a version of Just Cause 2 in which the protagonist is Puss in Boots. Or a version of Uncharted where the main character isn’t a twat.

John Romero Apologizes for Trying to Make You His Bitch