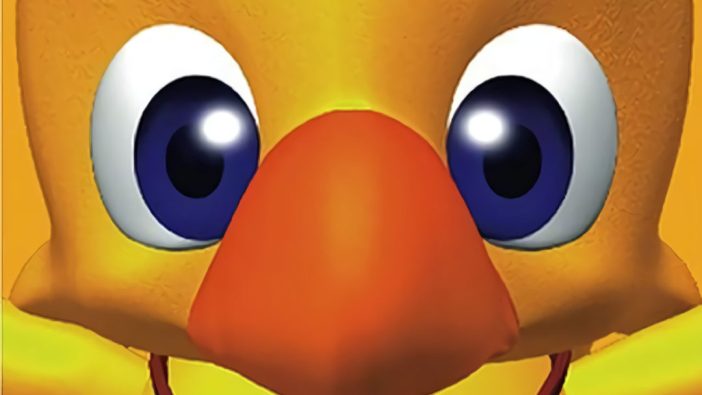 I’m not a monster. Of course I think the chocobo is adorable. As any warm-blooded human being who loves his family and puts his pants on one leg at a time, I too coo in delight when I fire up a Final Fantasy game and meet a tiny yellow bird chomping on greens. I hear Nobuo Uematsu’s signature melody that accompanies every appearance of the chocobo, wait for the little beast to squawk, “Kweh!” in my direction, and delight when whatever spiky-haired savior I’m playing as gets to ride around on its back like some kind of giant sword-wielding emu jockey. Chocobo’s Mystery Dungeon: Every Buddy!, the latest starring vehicle for the mascot, newly released on Nintendo Switch, is a sweet trifle of a game where you play as a chocobo exploring dungeons for altruism and profit. Playing the game and chuckling at my chocobo’s sweet little antics, it struck me that the old bird’s lovable veneer tends to obscure the fact that many of its appearances over the last 30 years are in fact weird as hell. The chocobo is a remarkably malleable mascot reflective of its parent series’ aesthetic daring. Just like Final Fantasy games themselves, these birds change. Chocobos can be cute and sweet, but they can also be grotesque, violent, terrifying, and sometimes — sometimes — they turn out to be sexy, philanthropic showgirls that live in a grown man’s hair.

Not in Every Buddy!, of course! That name tells you everything you need to know about the game’s tone. I mean, it’s still weird. This is a game where Chocobo and his adventurer pal Cid show up in a town where people keep forgetting their lives entirely and only a green-haired baby with the power to psychically transport the bird into their memories can save the day. Right. Chocobo’s just a plush sweety in this game, though. This particular incarnation has carried a loosely knit series of games that have come out fitfully over the last 20 years, starting with the original Chocobo’s Mystery Dungeon and carrying on through a cadre of mobile games and even a lovely little kart racer back on the original PlayStation. Big Disney eyes and a squat round body emphasize how fluffy this little cartoon, chicken-y beast is. Every Buddy! in particular amps up the cute factor by letting Chocobo learn special jobs as you play through the game. It’s not just a funny little bird, it’s a funny little bird dressed as a knight or a wizard or a teensy engineer. Nothing is more endearing than seeing this version of chocobo roll around on rocket skates, though. Nothing.

Steer away from Chocobo’s starring vehicles, though, and that’s when you start to run into the bird’s more unusual, and occasionally repulsive, incarnations. When it comes to night terror renditions of Final Fantasy’s mascot, nothing beats its first appearance in 1988’s Final Fantasy II for the Famicom. If you consider just the way the beast of burden is depicted in the game itself, you can see the throughline from its primitive beginnings to that sickly sweet rendition of the character in Every Buddy!. Rendered in the NES’ blocky graphics and the muted end of the hardware’s 64-color palette preferred by Square, the first chocobo still has big expressive eyes and a recognizable triangular plume that would stick with him even as he became more detailed over the years. As a wee sprite, he looks more like a freaky hatchling that never developed proper plumage rather than something you’d want to hug, but he’s not scary.

During the late ‘80s, though, part of Final Fantasy’s appeal was the supplementary artwork from painter Yoshitaka Amano that plastered box art, manuals, and strategy guides. This evocative imagery is in part what drew fans into Final Fantasy’s ethereal worldeven when the games’ presentation was so primitive. That being the case, it’s a wonder people ever became enamored with chocobos at all. Under Amano’s brush they originally looked like abhorrent, fleshy chimera, part undressed but still un-slaughtered chicken, part angry dinosaur, and all refugee from a Midnight Oil album cover. At least there was a method to Amano’s madness. He wasn’t trying to create some kind of lasting icon for the series, just an appropriately sci-fi steed for Final Fantasy II, a game that is more or less a one-to-one retelling of the first Star Wars movie but filtered through the lens of 1980s Japanese role-playing games. No wonder chocobos had a Ralph McQuarrian flair at the start.

It certainly didn’t stay that way. By the time 1990’s Final Fantasy III came out, the chocobo’s cuteness was becoming its dominant trait. Regular chocobos popped in the game with a more familiarly yellow coloring giving them the appearance of oversized baby chicks. Final Fantasy III also introduced the Fat Chocobo, a portly, garrulous magic bird that would continue to show up as a sort of living storage system who could take care of various resources for adventuring parties. When SquareSoft transitioned to the Super Nintendo hardware, this sprightly version of the bird was wrought in more and more affectionate detail. Final Fantasy V gave main character Bartz (née Butz) his very own personal, named chocobo,Boko. Final Fantasy VI was the first game in the series to put Chocobos front and center in the marketing plan. SquareSoft produced a very limited run of stuffed animals for that game in 1994 that cemented the oversized, perpetually shocked-looking baby bird design of the character that would emerge and stay for good once the Mystery Dungeon games went into production.

In the proper Final Fantasy games, though, the chocobo started to get strange again. With Final Fantasy VII, the series began its two-decade long push towards a more and more realistic presentation of its stylized worlds. This meant more environments that were no less fantastical, but settings and characters wrought with more recognizably human proportions. How the hell, you might ask, do you make these shrimpy chicken things look right when an otherwise normal looking human is riding them? By changing the bird’s characteristics in turn. Chocobos took on proportions not dissimilar to that bad dream drawing of Yoshitaka Amano’s, but retained the more appealing feathers and bright coloring. They even became more central to the action. Final Fantasy VII led you breed your multicolored chocobo for racing and traversing the world, Final Fantasy Tactics let you gain an advantage in battle by riding one, etc.

That variety has been the chocobo’s primary role since. It’s a convenient way to introduce fun little diversions in the Final Fantasy games, to create an aesthetic tie between new games that don’t share narrative or mechanical links between them, and to always give you a fun way to get around increasingly large game worlds. (To hell with the car in Final Fantasy XV. The chocobo farms are where it’s at.) Still, sometimes the chocobo still gets weird just like it did in that original illustration. For my money, no chocobo appearance beats the one that carries through Final Fantasy XIII and its sequels. Final Fantasy XIII infamously downplayed exploration, making for a linear, story-centric game that basically led you down a set path. As a result, there wasn’t much need for a big bird to ride around on. Chocobos still showed up, though. Sazh, an afroed gunman and one of the only likable protagonists in a deeply strange game, has a little baby chocobo living in his hair that occasionally pops out for comedic beats. Pretty damn weird considering how grim the game is overall, but not even a fraction as weird as when the chocobo grows up in Lightning Returns: Final Fantasy XIII.

Taking place 500 years after Final Fantasy XIII, Lightning Returns is already bizarre thanks to its premise. Lightning, the pink-haired warrior and star of the whole Final Fantasy XIII trilogy, has become an immortal trying to rescue people’s souls before the universe collapses. She achieves this primarily through doing good deeds for people; reuniting estranged lovers, redeeming criminals etc. One of the ways she finds people to help is by taking on assignments from Chocolina. Chocolina appears to be a flamboyant woman dressed in her underpants and some leftover Carnivale costume parts, who lives alone on a train station platform. If Chocolina comes off as eccentric, well, it’s not her fault. She’s not human! She’s a magic bird person who just looks like a sexy human. And it’s not like she had good magic bird parents to model appropriate magic bird behavior for her. No, she grew up in someone’s hair. That’s right: Chocolina is Sazh’s baby bird from the first Final Fantasy XIII. She just wants to do right by people and her surrogate dad.

Why? Shut up, that’s why, says Final Fantasy. The chocobo can be whatever the moment calls for, after all. If that particular story needs the bird to be something more — an adorable mascot, a distinctive fantasy warhorse, or an awkward do-gooder dressed for a high-end burlesque show — it’s covered.