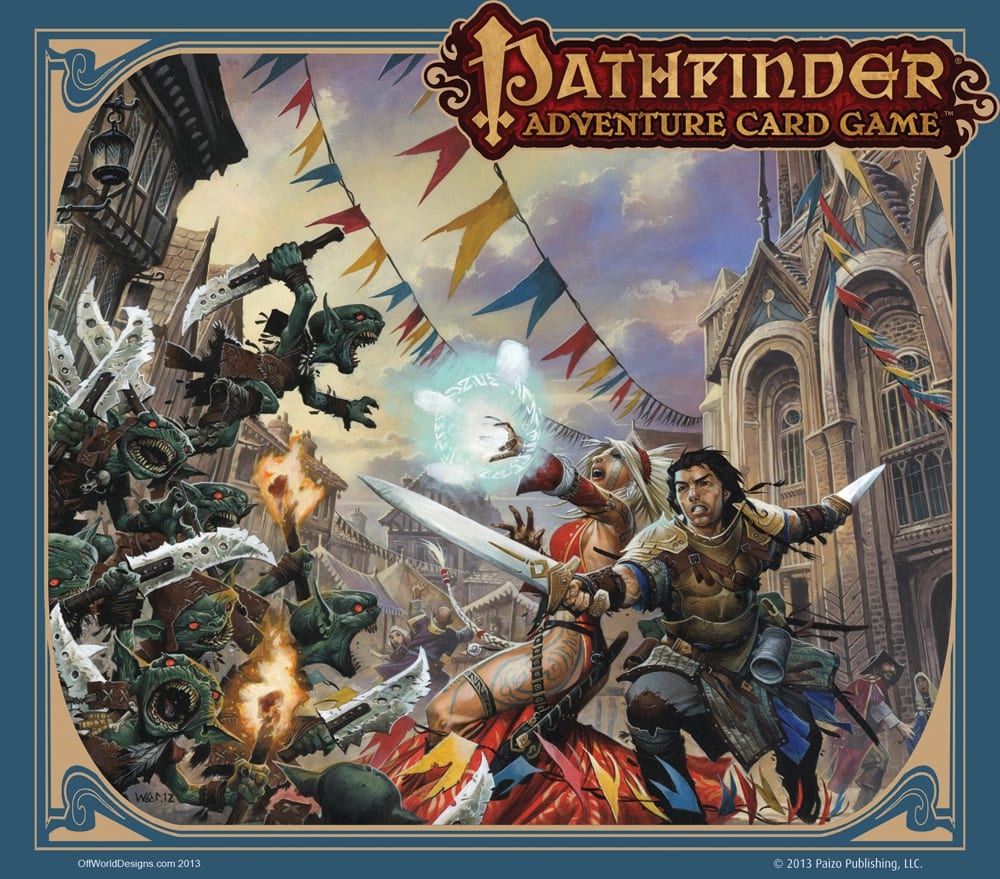 The tabletop roleplaying game Pathfinder might be my absolute favorite game, but it takes a huge amount of work to run well. Created using the basic rules set of Dungeons & Dragons 3.5, Pathfinder has grown into its own thriving system with a host of new character options, settings and antagonists. Paizo Publishing regularly releases Adventure Paths, prewritten, six-part scenarios meant to make game masters’ lives easier, but the company has also gone a step beyond that to let players get a taste of some of its most popular Adventure Paths without needing to do any prep work at all. Each of the four versions of the Pathfinder Adventure Card Game, developed by Lone Shark Games, is set in a different corner of the game’s world and embodies a unique style of fantasy saga.

Rise of the Runelords is both the first Pathfinder Adventure Path and the first edition of the Adventure Card Game, and in both cases it’s meant to familiarize players with the game’s most basic rules. The Adventure Card Game is fully cooperative and doesn’t require a game master. Players each control one of the signature characters introduced in the Pathfinder Roleplaying Game Core Rule Book such as Valeros the human fighter or Harsk the dwarf ranger. Like with a tabletop campaign, characters gain power and equipment throughout, and it’s played not just in a single session but over the course of months or even years.

The Adventure Card Game manifests the challenges that the heroes face by having them explore a series of location decks, which is done by flipping over cards and doing whatever they say which typically involves rolling dice and trying to hit a specific number. Each scenario has a little plot (we’ve nominated one player to read that text aloud in the voice of George Takei) letting you know the challenges you face and why you’re doing it. Rise of the Runelords is pretty classic fantasy in that you’re trying to stop some evil ancient force from wreaking havoc on the world. Each location deck has a randomly selected mix of banes — representing monsters, traps, as well as the specific scenario’s villain plus their henchmen — and boons like armor, weapons, and potions that can be added to your character’s deck.

Each player starts with a predetermined deck of terrible gear which they’ll gradually upgrade with better versions that can let them hit harder, take more punishment, or do some highly specific but useful things like moving to other locations out of turn to help out an ally. Completing a scenario gives the players a reward in the form of a special piece of gear or the chance to level up their characters, which can mean gaining a static bonus that applies to certain challenges, more cards in their deck (which is particularly useful since if you ever run out your character dies), or an entirely new power like the ability to heal your allies by letting them shuffle discarded cards back into their deck. The result is that you’ll feel like you’ve made progress almost every session, both moving along the plot and improving your character’s capabilities.

Characters are much less complex than they would be in the tabletop version, but the game still does a great job embodying the essence of each class. Kyra, cleric of the sun goddess Sarenrae, gets bonus dice when she’s fighting undead, while the rogue Merisiel is the best at dealing with traps. They’re not all created equal and in almost every edition we played someone decided a few scenarios in that they didn’t like their character and traded them. Like in the tabletop game, the key is finding something that works mechanically, suits your play style and doesn’t overlap too much with whatever your friends are playing so that your party has all the bases covered and doesn’t wind up with three people fighting for the suit of magical plate mail.

We enjoyed playing Rise of the Runelords, but it pales in comparison to Skull & Shackles, the second version of the Adventure Card Game. While it keeps the basic mechanics from Rise of the Runelords, Skull & Shackles layers on complexity and moves from boilerplate fantasy to over-the-top, morally ambiguous pirate adventure. Your party starts off getting press ganged into service on a ship and must improve their lot through beating up other crew members and eventually starting a mutiny. You spend the rest of the adventure trying to gather ships and gold and establish yourself as powers on the high seas. We got used to the fact that we were not actually the heroes of this story around the time we were tasked with beating up a guy and stealing his rum so that we could keep our crew drunk and happy.

Pathfinder is a roleplaying game where players are encouraged to get into character to talk with NPCs and each other. That’s not really an element of the Adventure Card Game, but we found ourselves doing it anyways during Skull & Shackles because the characters are so weird and wonderful. I played the kleptomaniac goblin Ranzak (try saying the name out loud) who is especially good at finding loot and can avoid getting into fights by making another player do the combat for him. I had a wonderful time getting giddy about picking up junk no one wanted and then declaring I was hiding behind our swashbuckler any time a threat showed up. Her character bio said she wore her dead mother’s cloak, but her player decided to take that to the next level and have her actually talk to her cloak, which became a running gag throughout the campaign. So did our blind oracle, who had the extremely powerful ability to see what was coming in a deck before we encountered it but was really bad at dealing with problems on our ship like fires or our absolute favorite, a goose getting stuck in the rigging.

If you want to feel like a truly badass hero, Wrath of the Righteous is the version to go with. It’s based on a particularly epic Adventure Path where the heroes must stop an invading army of demons. The tabletop version helped introduce a subsystem called Mythic meant to change the feel from sword and sorcery to stuff of literal legends by giving both player characters and their antagonists world-shaking powers. Here that’s manifested by tokens that give you flat bonuses to your character’s stats and can be spent to improve your die rolls even further. Those big numbers are necessary when battling demon lords and undead dragons, adding an extra complex resource management aspect to the game. There’s always a major paradigm shift necessary when completing one campaign with characters at the peak of their power and moving to a new one where they’re just starting out. We may never have again have a stronger party than we did in Wrath of the Righteous, when we were often capable of beating bad guys by ludicrous margins. The problem is that the stakes of the adventure were meant to be very high and we rarely felt truly challenged.

That hasn’t been the case in Mummy’s Mask, which is the first version of the game where we’ve repeatedly lost scenarios and had to go back and repeat them. Set in Pathfinder’s version of ancient Egypt, Mummy’s Mask is thematically closest to Skull & Shackles in that your characters seem to be fighting evildoers mostly as a means to amassing personal wealth and power. It’s also the most complex version, though the mastery of the basic systems we’ve gained by playing the previous games has made adapting to the changes relatively easy.

The cleverest innovations Mummy’s Mask adds is taking things that were purely advantageous in previous editions and giving them downsides. There are repeated instances where defeating a bane by too much results in something bad happening like losing treasure by utterly destroying a trapped box or taking damage by causing an ice monster to explode into jagged shards. Seeing the next card in a deck can give you an invaluable advantage when it comes to planning future turns, but in Mummy’s Mask revealing cards can trigger ill effects so you could wind up getting cursed with a lingering penalty or ambushed by a monster. Another wonderful addition is merchants who will take the useless gear you acquire when exploring and give you a chance to draw cards from the box that would better suit your deck. Buying and selling equipment is a key component to any RPG, so it’s almost surprising it took Paizo so long to figure out a way to incorporate it into the Adventure Card Game.

We’re still in the first of five parts of Mummy’s Mask, but I’m really looking forward to seeing more. Hopefully by the time we’re done the next adventure in the series, which is based on the intrigue-heavy Adventure Path Curse of the Crimson Throne, will be available so we can continue our quest together.