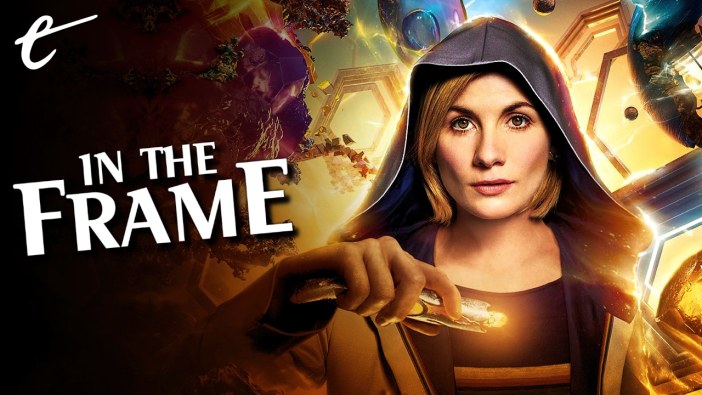 Doctor Who returns to television this weekend, with the launch of the final run of episodes produced by Chris Chibnall and starring Jodie Whittaker.

Fans are already speculating about what the future holds for the franchise, with Russell T. Davies returning as showrunner to succeed Chibnall. However, it seems like as good a time as any to reflect on the legacy of Chibnall’s stewardship. Chibnall’s tenure has been divisive and controversial, and it is interesting to wonder what posterity will make of it. Still, this is also a good opportunity to take a step back and look at how Chris Chibnall changed Doctor Who, for better and for worse.

It is no secret that Doctor Who is a particularly challenging television series to make. Working on the first season of the revival was so stressful that it (seemingly permanently) fractured the working relationship between Davies and Christopher Eccleston. The show is so demanding that Eccleston’s three successors – David Tennant, Matt Smith, and Peter Capaldi – all required knee or back surgery during their time working on the series. It is a challenging show to produce.

With that in mind, there is a lot to be said for Chibnall as a line producer, managing the day-to-day production of Doctor Who. In that capacity, Chibnall has worked hard to make the show’s production a more manageable burden. A large part of this has been the decision to expand the regular cast. For the bulk of the first 10 seasons of the revival, with notable exceptions, the show defaulted to a format that included two leads: the Doctor and a companion. Expanding the cast caused narrative problems, as Chibnall struggled to give these supporting characters the same agency or development as earlier revival companions like Rose Tyler (Billie Piper), Donna Noble (Catherine Tate), Amy Pond (Karen Gillan), or Clara Oswald (Jenna Coleman). In many ways, the large TARDIS crew felt like a throwback to the earliest days of the show, when stories could be stretched across multiple episodes instead of dealt with in single installments.

However, it was a canny production move. Notably, making Doctor Who appears to have been considerably less stressful for this team than it had been for their predecessors. This is particularly impressive when outside factors are taken into account; Whittaker had a child two years before assuming the role, and Walsh balanced his time as a regular cast member with his status as a British television personality who also hosted hundreds of episodes of the game show The Chase.

The large ensemble allowed Chibnall to split up the cast in individual stories and therefore take the burden off individual performers. Chibnall has thus avoided the sorts of Doctor- or companion-lite episodes that were common under Russell T. Davies. Episodes like “Fugitive of the Judoon” and “Praxeus” are often structured so that significant stretches separate the leads, keeping each performer’s workload manageable. It’s not always narratively satisfying, but it is canny.

Similarly, Chibnall has invested heavily in upgrading the look and feel of Doctor Who. In his first year as showrunner, the series transitioned to Cooke and Angenieux anamorphic lenses to make the series look more “cinematic.” The aspect ratio shifted from standard 16:9 to a “more cinematic” 2:1, a format popularized by Netflix hits like House of Cards and Stranger Things and embraced by other broadcasters for shows like Fargo and The Handmaid’s Tale. 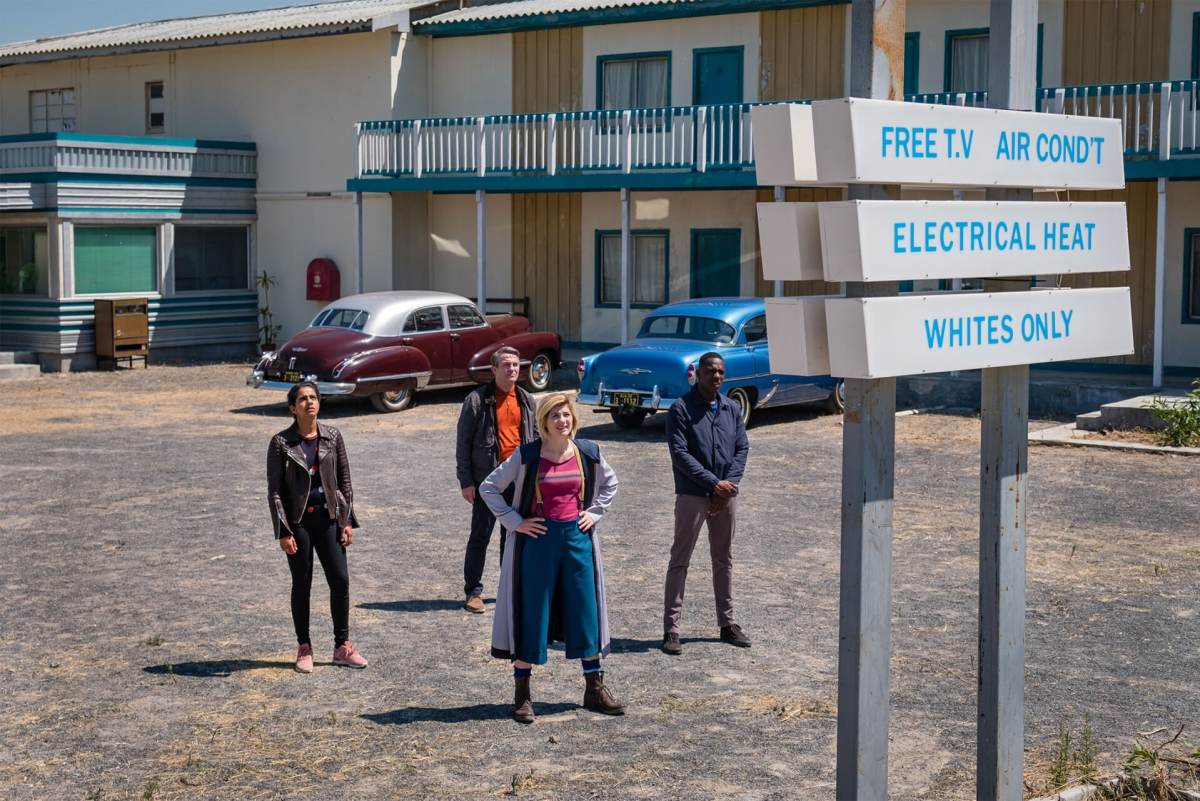 While his predecessor Steven Moffat had overseen significant location work in places like the United States and Spain, Chibnall arguably made even greater use of overseas locations. There’s a palpable grandeur to the use of South Africa in episodes like “The Ghost Monument” and “Rosa,” not to mention Spain in “Demons of the Punjab.” There is a convincing argument to be made that Doctor Who has never looked more cinematic than during Chibnall’s tenure. He deserves credit for this.

However, there is something slightly uncomfortable about the specific nature of these changes. Taken as a whole, it seems like Chibnall is turning Doctor Who into a much more generic piece of modern television. In 2012, Andy Greenwald decried the rise of shows he described as “prestige simulacra,” which mimicked the look and feel of prestigious television. It can sometimes feel like Chibnall has pushed Doctor Who into that zone.

Like a lot of television aspiring to “prestige” status, Chibnall’s Doctor Who is appreciably darker and earthier in cinematography. It’s also reflected in the repeated use of “cinematic” to describe Chibnall’s stylistic innovations, a loaded term when some still think that the highest compliment that can be paid to television is to compare it to cinema. Even the aspect ratio invites comparisons to House of Cards, Fargo, and The Handmaid’s Tale – all television aspiring to “importance.” This fixation on proving the “importance” and “worthiness” of Doctor Who is also reflected in the show’s storytelling. Chibnall has placed a renewed emphasis on the educational aspect of Doctor Who, particularly stories about the character traveling in time and meeting key figures like Rosa Parks (Vinette Robinson), Ada Lovelace (Sylvie Briggs), and Noor Inayat Khan (Aurora Marion). This is commendable stuff in theory, but the execution feels clumsy and ill-considered.

It often feels like Chibnall has the idea of having the Doctor meet a key figure and learn about their importance, but no idea what the show actually wants to say. In “Rosa,” the Doctor seems to argue that Rosa Parks’ activism worked out because mankind eventually named an asteroid after her. In “Spyfall,” the Doctor wipes Noor Inayat Khan’s memory before consigning her to torture and execution in Dachau; she also weaponizes Nazi racism against the Master (Sacha Dhawan).

All of this plays as confused and clumsy gesturing towards the idea of “importance.” Chibnall emulates prestige television in other ways. Collaborator James Strong described Chibnall’s Doctor Who as “a five-year project,” suggesting an overarching plan for the series. In the second episode of his tenure, Chibnall seeded the idea of “the Timeless Child,” a concept that would pay off at the end of his second season with a continuity-shattering revelation about the Doctor’s past. Chibnall’s final season, titled Flux, has been sold as “one epic story,” the first time the show has done this since “The Trial of a Time Lord” in 1986.

This Doctor Who move takes another page from the prestige television playbook, where entire seasons and shows are often framed as 10-to-73-hour “movies” and where the worth of a story is often measured by how it contributes to the endgame. It’s notable that one of the most fundamental features of Chibnall’s “Timeless Child” revelation is how it tries to impose meaningful continuity on the history of Doctor Who, something the show has avoided for decades. Chibnall is trying to give Doctor Who a “canon.” 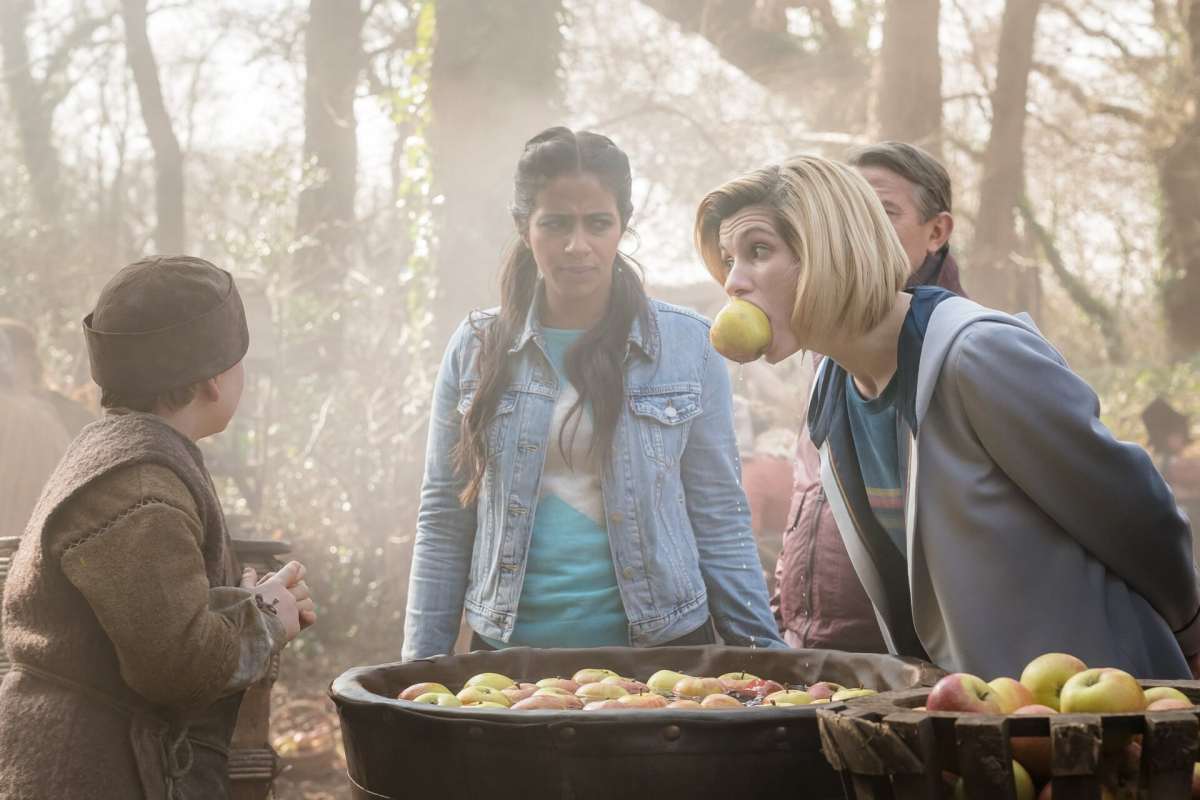 This fixation on rebuilding Doctor Who in the image of prestige television stands in marked contrast to the work of Chibnall’s predecessors. Davies tried to situate Doctor Who in the context of both pulpy genre television like Buffy the Vampire Slayer and soap operas like EastEnders. The first part of Davies’ first season finale, “Bad Wolf,” crashed the Ninth Doctor (Eccleston) into reality television, even borrowing the host and soundtrack from Big Brother. This was a broader and less self-important kind of television.

There is a sense in which the Chibnall era is insistent that Doctor Who is “serious business.” This perhaps makes sense, given Chibnall’s history with the show. Chibnall’s first claim to fame is appearing as a teenage fan on the show Open Air, complaining to writers Pip and Jane Baker about the show’s “silly monsters.” In this context, it’s notable that Chibnall has made an effort to offer more grounded redesigns of classic “silly monsters” like the Daleks and the Sontarans.

Chibnall is a product of 1980s Doctor Who fandom, engaging with the show at a creative low point. Much of that era of the show was treated as a joke, with former BBC Director General Michael Grade and comedian Paul Merton even singling out the infamously awful “Warriors of the Deep” as a low point in the show’s history. This was the era that Grade dismissed as “garbage” and would lead to the show’s extended cancellation. Chibnall’s tenure seems like a reaction against this era.

The irony, of course, is that many of the big problems with 1980s Doctor Who derived from the same insistence that Doctor Who should be taken seriously. The retrofitted continuity of Chibnall’s “Timeless Child” arc recalls the convoluted fan service of something like “Attack of the Cybermen.” Similarly, the scale and spectacle of Chibnall’s “Ascension of the Cyberman” looks like nothing more than an attempt to remake the 1982 serial “Earthshock” with a modern BBC budget.

Chibnall has worked hard to make Doctor Who look more like a Netflix or HBO show, offering the polish and veneer expected of modern prestige television. However, it’s hard not to wonder if this has cost the show something of its unique and distinct identity. Under Davies and Moffat, Doctor Who looked like nothing else. Under Chibnall, it looks like everything else on television.