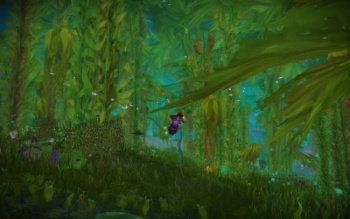 Last time around, I took a look at the undersea zone of Vashj’ir and got eaten by a giant shark, and fun times were had by all (except my poor gnome-shark-food mage, of course). I spent a bit more time questing around Vashj’ir and doing cool things like riding my own shark around and having it messily devour evil nagas (yes, you read that right) – but after a while, I could put it off no longer: It was time to get my dungeon-crawl on.

The good news is, it’s a lot easier to find a dungeon group in the Cataclysm beta than it was to do the same while testing the Wrath of the Lich King expansion, thanks to the Dungeon Finder introduced in a recent patch. You just click the button, hop in the queue, and wait for your group. The bad news is, if you aren’t a healer or a tank it’s still going to take you at least 20 minutes to put one together.

The interesting news is that while people playing WoW on the live servers get matched with people from other realms in their group, in the beta it matched us with people on the other beta servers around the world. So when I finally got the invite to the Blackrock Caverns group, I found myself in a group with three people from the European servers and one from Korea. I greeted them – no response. Oh, right, that “language barrier” thing. Ah well, it shouldn’t be too much of a problem, right?

As the name would indicate, Blackrock Caverns is the third dungeon (well, technically fifth if you include raids) in the venerable Blackrock Mountain, home to the Classic-WoW Blackrock Depths and Blackrock Spire. The Twilight cult is busy doing … um, something in the name of their evil master Deathwing (it’s beta; few of the dungeons have contexts yet) – go make them all dead. Sound simple enough. 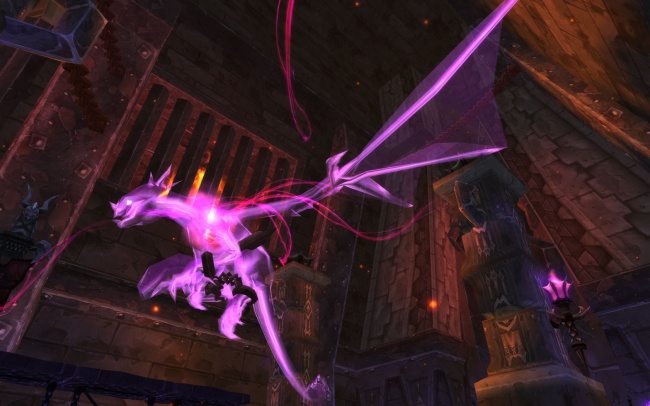 We started the run, started pulling the trash mobs and killing them, being careful not to stand in the very deadly fire grenades they throw. Obviously, “don’t stand in the fire” is universal – clearly, this run was going to be a piece of cake. We all knew how to play, didn’t we? After just a few pulls, we could see the first boss – a large, armored ogre lord – wandering around a cage that housed a monstrous mutated orc.

After killing a few of the guards around the area, we pulled the boss – and then every other guard in the area joined the fight, and we all died. Ouch. One corpse run later (I hadn’t realized how nostalgic that Blackrock Mountain corpse run was) we tried again, killing all of the guards first this time. The ogre had a few neat tricks – he’ll teleport the group to him and chain them in place, and you need to destroy the chains and run away before he unleashes a short-range attack that kills everyone – but we finally managed to take him down. So far, so good.

Of course, killing the jailer unlocked the cage containing the giant, mutated orc (that shoddy magical craftsmanship at work), but instead of attacking us he went on a rampage against our former captors, knocking an entire regiment off a bridge to their deaths. That handily cleared the way for us, and we proceeded down into the dungeon’s depths. You can definitely tell that this is a Blackrock Mountain dungeon, as it retains many of the same artistic stylings as Spire and Depths – lots of black stone, dark iron, and lava flows – but has a “Twilight” theme to it (the cult, not the vampire books). There’s lots of purples and cool fluorescent dragon specters to keep it visually interesting. 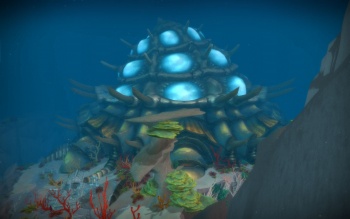 The lack of communication in a new dungeon hadn’t hampered us yet, since it was clear that we roughly knew what we were doing. Things got harder at the second boss, however. Three cultists are kneeling in front of her, and once the fight starts she’ll begin to cast magic on all three of them – a beam that applies a steadily-increasing buff. If the buff hits a hundred stacks, they turn into a big dragon and hurt you. This is very bad. Much like the Netherspite encounter in Karazhan, though, players can stand in the beams and intercept them – but if they get a hundred stacks of the buff, they become mind controlled and help kill everyone. This is also very bad.

It’s a very intriguing experience running a dungeon like this with a group that can’t communicate. On live WoW, we all have obscenely epic gear and know all of the current Wrath dungeons by heart, so we don’t need to chat. But when we barely outgear the content and don’t know any of the fights, even many of the little “trash” enemies can be lethal. Even so, my language-barricaded group pressed on, bravely knowing our repair bills wouldn’t ever count on our “real” characters.

The third boss was interesting – a giant bipedal dragon who initially takes virtually no damage. The tank must drag him into a giant pillar of flame to melt his armor so that the group can hurt him, but the longer he stays in the pillar the more damage he does when he comes out of it. It’s a very tricky dance for the tank, but not all that complex for the rest of us, and we take him down in one shot.

Moving on, we encountered the rampaging mutated orc again (once more helpfully clearing the road for us) and then ran into another boss that is a fond throwback to Classic WoW. Beauty is a core hound den mother, and people who played back at level 60 will probably connect her to her mate, The Beast. She fights much like her mate – charging, spitting fire, a fear-inducing roar – but she has little core hound pups nearby that can complicate the fight if you don’t kill them beforehand. Make sure to leave Runty alive, though: Not only is he adorable (and you will feel bad killing him), but it’ll make Beauty go berserk and murder you in a painful manner. 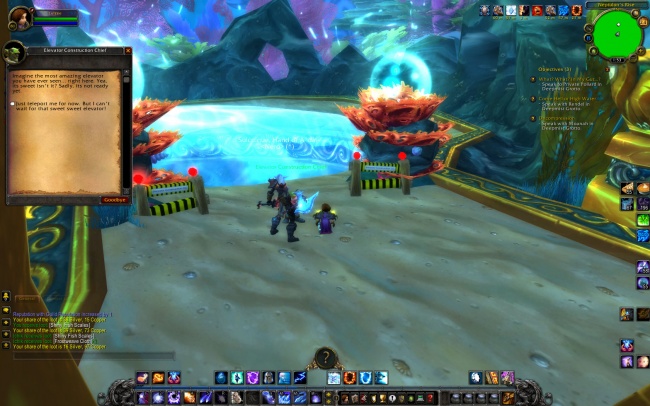 We’d made it almost to the end of the dungeon, and I was feeling good about having persevered in the face of the language barrier – until we met the final boss. The end boss of the dungeon, a powerful Earthen elemental, has two adds with no aggro table: They’ll attack whoever hit them last, and if they get in range of their target will apply a debuff that prevents all healing. Obviously, this means the tank can’t take them, or they’ll die for lack of heals.

This fight was a lot of fun, because it was the exact opposite of a “tank-and-spank” – the damage-dealers need to work together to juggle the guards, picking them up and letting them go in order to be healed. Unfortunately, it also requires a lot of coordination, and perhaps a bit more gear than we had. One wipe became two wipes, two became three, and by three wipes we’d had enough.

So yes. Blackrock Caverns remains uncompleted, and I had a similar experience in Throne of the Tides – though there, we didn’t even make it to the first boss. Can someone tell me how to say “Someone please kill those damn healers” in Korean?

Next time: We take a trip to Mount Hyjal.