Somewhat ironically for a horror property built around a mass-produced children’s toy, the Chucky / Child’s Play franchise is one of a kind. Then again, that tension is a large part of the appeal of the series.

The original Child’s Play opens with the death of serial killer Charles Lee Ray (Brad Dourif). Ray is pursued by the police into a toy store and uses his dying breath to transfer his soul into one of the store’s “Good Guy” dolls. The doll, a model named “Chucky,” is stolen from the crime scene and sold on the black market to Karen Barclay (Catherine Hicks). Karen’s son Andy (Alex Vincent) desperately wants the season’s most popular toy, but she can’t afford to pay retail prices.

Chucky has been terrorizing and enchanting horror movie fans for over three decades at this point, appearing in seven feature films, a recent reboot of the premise, and an ongoing television series co-produced by USA Networks and Syfy. While the character has never become quite as ubiquitous as Freddy Krueger or Michael Myers, Chucky has built a strong cult following. Part of this is rooted in the character’s versatility. The Chucky franchise is remarkably elastic in terms of tone and genre.

Seed of Chucky is perhaps the most polarizing and divisive movie in the franchise, leaning fully into campy self-awareness. Chucky and Tiffany go to Hollywood, reuniting with their genderfluid child Glen / Glenda (Billy Boyd) and terrorizing the real Jennifer Tilly (herself). When the studio received the script for this postmodern slasher movie homage to Ed Wood’s Glen or Glenda starring John Waters as a sleazy paparazzi, their note was, “This is too gay.”

What is really interesting about these seven films is that they can feel very distinct from one another, but they all share a common identity. Watching the Chucky movies can feel like watching a horror franchise in drag, one that is willing to experiment with various subgenres of horror from slasher movies to road-trip serial killer films to postmodern satires to psychological thrillers. However, each of these films remains true to Chucky as a character and Chucky as a franchise.

This tension is woven into the series’s fabric. The doll in which Charles Lee Ray traps himself is a mass-produced commodity. Child’s Play 2 and Child’s Play 3 open on the capitalistic machinations of the Play Pals company manufacturing the toys. Child’s Play 2 is bookended with sequences set on the company’s assembly line. They evoke a key sequence from Chaplin’s Modern Times, a film about “the struggle to eschew alienation and preserve humanity in a modern, mechanized world.”

There is a constant struggle to assert identity within the Chucky franchise. Child’s Play 3 takes place in a military academy that tries to strip away the humanity and individuality of its students. This theme of identity carries over to the franchise’s long-standing queer themes. Glen / Glenda spends much of Seed of Chucky attempting to figure out who they actually are. In the second episode of the Chucky television series, Jake Wheeler (Zackary Arthur) is shocked to hear that the serial killer accepts his child’s identity. Chucky is offended, replying, “I’m not a monster, Jake.”

This identity crisis occasionally plays through the franchise itself. One of the interesting hooks in Curse of Chucky is the idea that the franchise has undergone something of a soft reboot following the reaction to Seed of Chucky. After all, Curse of Chucky was the first horror film released after the wave of classic horror reboots and remakes: The Texas Chainsaw Massacre, The Hills Have Eyes, Halloween, A Nightmare on Elm Street. It would make sense to reboot the Chucky franchise.

In its opening acts, Curse of Chucky appears to jettison a lot of continuity from previous films. Tiffany is nowhere to be seen. Glen / Glenda is gone. Chucky even appears to have a new body; the stitching and scarring that marked his face since Bride of Chucky has been removed. There’s something uncanny about this; Chucky’s unscarred face is somehow more unsettling than his stitched-together visage, as if what made him unique has been erased and he’s been reset to a factory model.

Curse of Chucky giddily subverts this expectation. Towards the end of the film, Chucky reveals that he has simply been wearing playdough to cover his scars. The third act features an extended flashback that delves into the series’s mythology, with Dourif appearing in the flesh. These flashbacks even dovetail neatly into a replay of the opening scenes of Child’s Play. The closing scenes see Jennifer Tilly returning, and a post-credits stinger features Alex Vincent reprising his role as Andy.

Instead of rejecting the insanity of Seed of Chucky, Curse of Chucky doubles down. Chucky cannot be anything but Chucky. Cult of Chucky heightens this idea further, revealing that Chucky can duplicate his personality. This builds on an idea that creator Don Mancini had been nursing for years. Chucky copies himself into two more dolls and takes over Nica’s body. Malcolm (Adam Hurtig), a patient with multiple personality disorder, even manifests Chucky as one of his personalities. 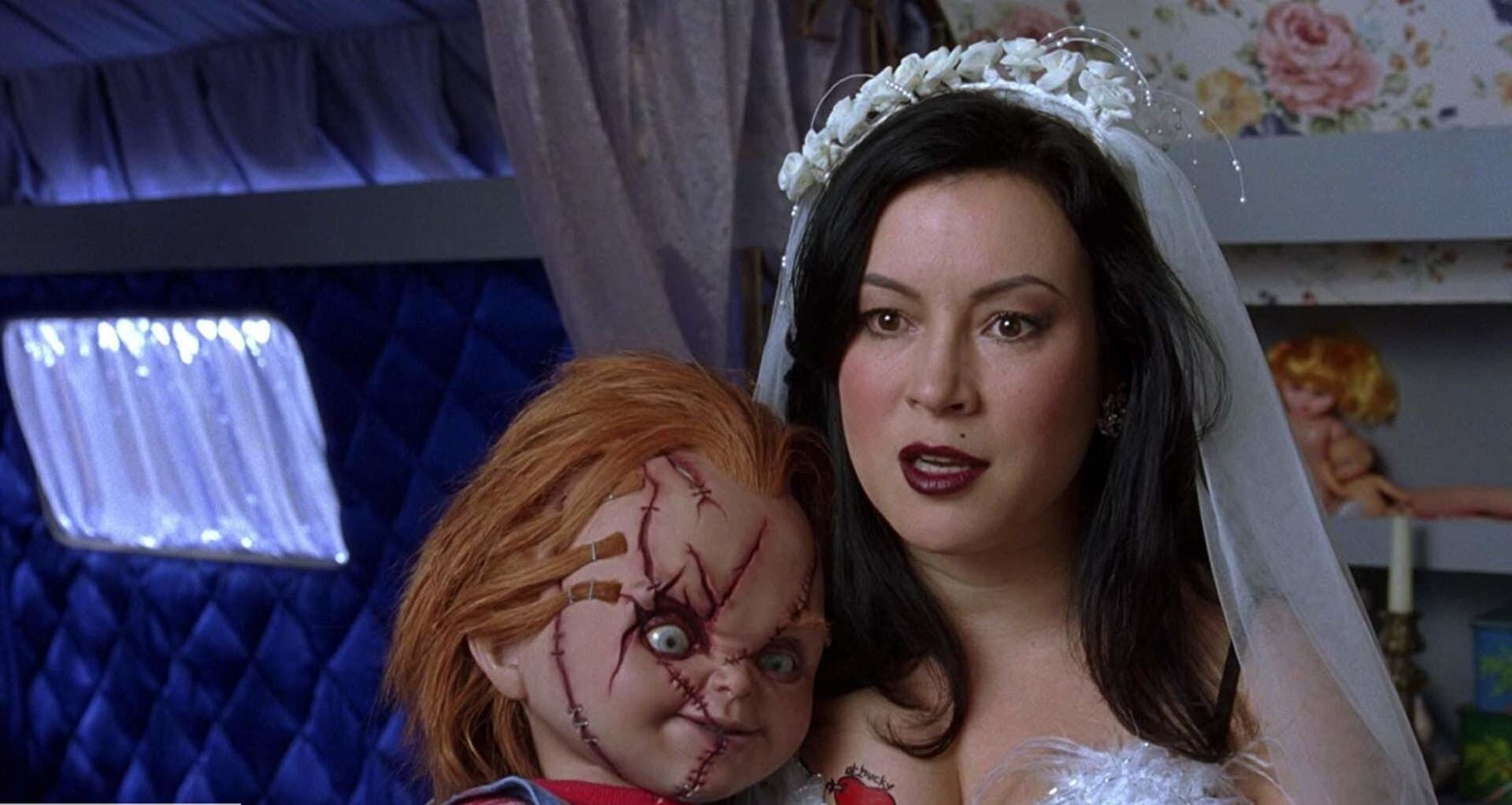 In Cult of Chucky, the killer repurposes one of the central anxieties of the larger franchise. So much of the Chucky franchise is rooted in the fear of loss of identity, the possibility that this character is a mass-produced commodity that could easily have its personality stripped away. Fiona Dourif has argued that her father’s interpretation of Chucky is rooted in the idea that the doll is “afraid of oblivion.” That might be a fear of death, but it also suggests a more profound negation of self.

This fear makes sense. Most horror franchises are the work of studio assembly lines. Often early films are the work of auteurs, like John Carpenter’s Halloween, Wes Craven’s Nightmare on Elm Street, Tobe Hooper’s Texas Chain Saw Massacre, or even James Wan’s Saw. Those creators might remain involved for a sequel or two or even occasionally return years later like Wes Craven did for New Nightmare. However, in most cases, horror sequels become an anonymous churn.

In contrast, the Chucky franchise has retained a strong central identity. Don Mancini has a script credit on all seven films, directed the three films since Seed of Chucky, and is showrunning the television series. This level of creative consistency within a major horror franchise is relatively rare. The only truly comparable example is the Scream franchise, where the first four movies were directed by Wes Craven and three of those four worked from scripts by Kevin Williamson.

Perhaps this fear of loss of identity reflects Mancini’s own anxieties about his authorship of the franchise, particularly in an era where these sorts of intellectual properties are usually more cynically exploited. In 2019, Orion Pictures released a rebooted Child’s Play written by Tyler Burton Smith and directed by Lars Klevberg, with Mark Hamill voicing Chucky. Mancini and Dourif were not involved. Mancini acknowledged that he was “a little insulted” and his “feelings were hurt” by the decision.

At its core, the Chucky films are a similar commodity to the “Good Guy” dolls in which Charles Lee Ray finds his soul contained. They are part of a larger assembly line process that often erases individuality in service of the larger demands of the market. They are the product of a system that often produces copies of copies, lifeless facsimiles and dull simulacra of something that was meant to be unique and distinct.

As such, there’s something vaguely reassuring in the fact that the Chucky franchise has managed to hold on to its own distinct identity just as tightly as Charles Lee Ray has. More than that, it does it so easily that it makes it look like child’s play.