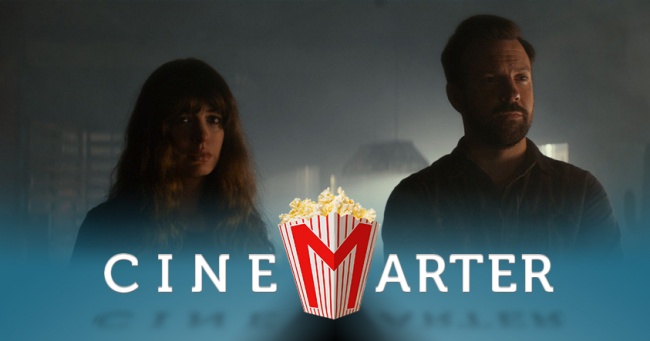 Bear with me here, because Colossal‘s premise is a little hard to digest, especially on paper. It starts out simple enough, though. Anne Hathaway stars as a failed writer named Gloria, someone who spends her nights drinking, her days sleeping, and the only time with her boyfriend (Dan Stevens) hungover. He kicks her out of his apartment, she moves back home into her (unoccupied) childhood home in order to figure things out, eventually reconnecting with a former friend, Oscar (Jason Sudeikis), who now owns the town bar. He offers her a job, they become drinking buddies, and things start to pick up for her. Oscar even gets her a TV and a futon. What a pal.

Then a giant monster attacks South Korea. Eventually, Gloria realizes that, through magic, she actually controls both if the monster appears and what it does if it shows up. Whenever she stumbles through a playground at a specific time (usually still drunk after a night of drinking) the monster appears in Seoul and mimics her every move in real time. She comes to this realization after inadvertently killing dozens, and maybe hundreds, of people.

The movie isn’t done getting weird there. It turns out that, for some reason, Oscar can also create a giant being in Seoul – his is a robot, not a monster. It’s around this time that Colossal starts to become a very different movie. What was initially a comedic journey through Gloria’s attempts to not be an utter failure of a human being quite rapidly becomes a movie about abusive relationships and the consequences of one’s actions – and makes you feel less-than-stellar about the laughing you did in its first half. It reframes previous actions and situations in a way that makes you – maybe even openly – go “ohhhhh.”

So, yeah, you get a giant monster movie – with surprisingly decent special effects given the low budget with which Colossal is working – as well as an effective character drama – one that connects these two ordinarily separate types of movies through metaphor. It gets way darker and deeper than it seems like it will going in. The combination of these two stories works really well, and it more than easily holds our attention all the way to its finale.

It’s the kind of movie that’s more fun the less you know about it going in.

Colossal wouldn’t work without strong performances in its two leading roles. Anne Hathaway goes back into Rachel Getting Married mode for much of the film – something that, you know, garnered her an Oscar nomination – and it feels like such a natural fit. She’s great at playing this sort of role. Meanwhile, Jason Sudeikis, who only recently has transitioned into more of a dramatic actor, turns in his best performance to-date. It’s a spoiler to say exactly why he’s great, but the progression he goes through, and the perfect balance he strikes for his character makes this movie.

These types of movies are often overpraised by critics, according to the general movie-going public. Think back to something like Splice – the majority of critics liked it, while the general audience decidedly didn’t. I feel like this happens in large part because of how “different” they are; these movies aren’t like many others, and since critics see so many similar-feeling movies, they stand out as a result. Conversely, most theatrical releases are engineered to be similar-feeling – that’s what sells – so the general audience gets put off by them. It’s just a theory, folks.

Otherwise, I don’t really want to spoil the twists and turns that permeate Colossal. It’s the kind of movie that’s more fun the less you know about it going in. Here’s the important stuff: It’s a lot of fun, it’s smarter and darker than you think it will be, it’s weird – but in a good way – and it does, indeed, have a couple of giant entities that destroy parts of South Korea. Trust me and see Colossal.

Recommendation: Read nothing more about it and go see Colossal.