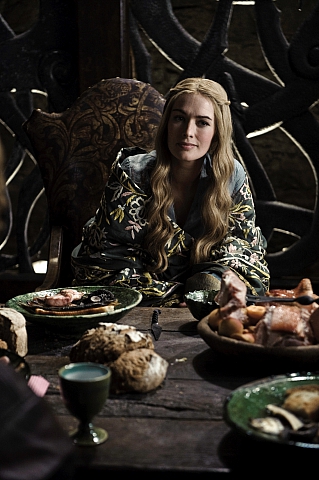 For a summation of the plot without much spoiling, head over to Justin Clouse’s recap, but if you’re a fan of the books and want more in-depth, spoiler-rich discussion of what happens in “The Pointy End,” read on, my friends!

In a review of HBO’s Game of Thrones submitted after she had watched the first few episodes, New York Times reviewer Ginia Bellafante took umbrage with the shots of female nudity and sex. (The Times story is behind a paywall now but you can read the excerpt here.) Bellafante thought such debauchery was actually meant to soften up the otherwise gritty setting of knights and warriors. “Game of Thrones is boy fiction patronizingly turned out to reach the population’s other half,” she wrote. Fantasy fandom, which anecdotally I’d say is more than half female, reared its head at such a preposterous idea. Not only does George R. R. Martin’s series appeal to both genders, but he is an expert at writing characters that transcend gender roles. The HBO adaptation proves that Game of Thrones is anything but “boy fiction.”

The first seven episodes of Game of Thrones displayed female characters that were active agents in their own lives, something that most chick lit omits, but “The Pointy End” especially showcased women and girls being strong and moving the plot forward. Here are a few moments where I think the women really stood out.

DAENERYS TARGARYEN is learning her power. After the death of her overbearing brother, the young dragon exerts her will on her new people not through strength of arms, but her calm authority. She sees the women about to be raped by her husband’s warriors and she firmly claims them for her own. This, of course, upsets the would-be rapist and he confronts KHAL DROGO. Here again, Dany doesn’t shy from the truth or offer any excuse, she simply states her will. Drogo accedes, and, before one of the greatest leadups to a fight I’ve seen in a while, eventually kills the complainer and rips out his tongue. The wound he receives as result, however, is kind of a big deal because it will fester terribly, leading to the death of the once-powerful Khal Drogo.

All this because Daenarys didn’t want women to be raped. The moment is one of two subtle but important shifts from the book as written by Martin. In the book, Drogo is wounded in battle against the Lhazareen (or Lamb men) and tended to by the healer MIRRI MAZ DUUR after the wounds don’t seem to be healing. In the show, the wound Drogo receives in the duel looks like it will be the fatal one. That means Daenarys is not only responsible for corrupting the wound by asking Maz Duur to tend to it, but she is the reason her husband gets hurt in the first place. Drogo’s death is totally her fault.

SANSA STARK has never had much need of a backbone. The young lady was all set to spread her legs and bear babies for her golden-haired JOFFREY, but then NED STARK gets all treasonous and everyone Sansa knows in the city is killed or driven off. Poor Sansa doesn’t know who to trust, but she has a feeling that the QUEEN and her cronies of LITTLEFINGER, VARYS, and PYCELLE aren’t telling her everything. She takes all the courage she has and goes to court amid accusing stares to plead for her father’s life. It’s all show, and she is clearly being manipulated even as she does it, but for Sansa, kneeling before the Iron Throne and begging for her father’s life is the first brave thing she has ever done. Thankfully, it’s not the last. 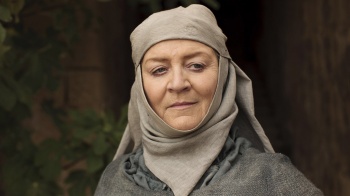 Her sister ARYA has all the courage of the Stark girls, but even she is scared when the Lannisters come to take her with MERYN TRANT of the Kingsguard. SYRIO FOREL bests four men with just a wooden stick – great fight choreography by the way, Braavosi water dancing has a totally different feel than the slow hack and slash of the knightly combat we’ve seen so far – before Arya has even the courage to run. Then as she searches for NEEDLE, a stableboy comes upon her and she has just enough time to get the pointy end up. (Get it? Episode title references FTW!)

Over Twitter, The Escapist contributor Rowan Kaiser suggested that this is a huge difference from Martin’s book because it seems like Arya kills by accident instead of necessity. I argued that the departure wasn’t too severe because in both Arya becomes a killer not by her own desire but because of what’s happened to her. Plus, this episode is the only one that George R. R. Martin is credited with writing, so I’m pretty sure he’s ok with any possible changes.

It’s not just the young girls who gain courage, as both the elder Stark and Lannister women exert their strength. CATELYN STARK starts the episode still in the EYRIE ruled by her sister LYSA, who has become a bit of a recluse in the hopes of protecting her son ROBIN (who still wins points on the creepy kid scale for being hungry for mother’s milk.) The news of Ned’s imprisonment does not go over well with Cat, and she yells at her sister for the first time in the same breath that she asks for her men to help fight the Lannisters. In retrospect, berating your little sister is not the best way to convince her to help you, but it’s still nice to see Cat get fed up. Then when she meets up with ROBB and his bannermen, it’s great that she has no intention of stopping him go to battle. She knows that the only way her family will survive is for Robb to defeat his enemies on the field; I’m looking forward to the pair of them work as a team over the next two seasons. (Oh, the Red Wedding … that’s going to suck to watch.)

And, of course, everyone knows that Cersei Lannister is really calling the shots in KING’S LANDING. From her dismissal of BARRISTAN SELMY to her manipulation of Sansa Stark, Cersei is playing the game of thrones better than anyone in the Seven Kingdoms, right now anyway.

But despite all of these strong female characters in this episode, I was again struck by the actions of a bit player. I mentioned how I loved the portrayal of SEPTA MORDANE as the governess of the Stark children in episode six, but in “The Pointy End” she has her shining moment. Walking down the corridor, Sansa and the Septa hear the sounds of battle. Septa Mordane knows exactly what is happening, and she tells the young lady to flee just as the Lannister swords come into view. The old lady, dressed in robes and a habit, then calmly walks forward, her face stoic as she performs her ultimate service to her House. She is as much a hero as any other character in the story.

The show’s creators thankfully did not show the murder of Septa Mordane, cutting away even before the guards press forward, but Varys later tells Eddard Stark that all of his household was killed. Is there nothing more feminine than a woman sacrificing herself for the people she cares for? Is Game of Thrones really boy fiction?

This episode, at least, proves that women can have the same virtues and vices as the men, and that’s why it doesn’t deserve to be dismissed by the likes of Ginia Bellafante.