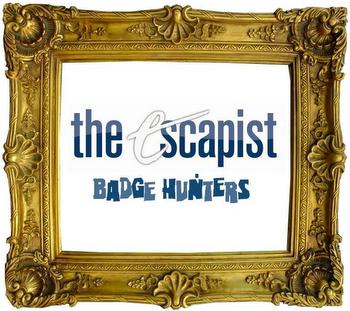 Whether you see them as a status symbol, a chronicle of personal achievement or just a flashy way to rep your own personal style, you’ve got to admit that they’re a big deal around The Escapist. With that in mind, we’d like to take a minute to call out the Escapist Badge Hunters group, a merry band of friends that have dedicated their time on-site to seeking out and cataloguing the wealth of badges floating around out there in the Escapist ether.

We sat down with the group’s current leader, Zombie_Fish, hoping to gain some insight about what it is that makes this user group tick. Here’s what he had to say:

Who are the Escapist Badge Hunters, and how did they come to be?

Zombie_Fish:
You know those guys who try and get every single achievement in a game regardless of how ludicrous and impossible it seems? We’re The Escapist‘s equivalent of those guys. As a community we:

As for how we began? Well, badges themselves have been around since August 2008 and the community of it really began about half a year later when a good friend of mine called Nivag made the original Badge Gallery. Back then the gallery was a guide, the idea being that it was where anyone could go to get advice for any badges either from the thread itself or from its regulars.

After user groups were first introduced to the site, Nivag created the Escapist Badge Hunters, a user group with the same cause as the guide and also a more convenient way of doing news announcements on new badges. However, over time the group became more used than the thread. So Nivag changed the thread to being a gallery for displaying all the badges, instead of being the definite place for help with badges. We also made it a bit fancier with banners and stuff at that time.

What role do you play in the Badge Hunters community, and how did that begin?

Zombie_Fish:
I am the owner and manager of the Escapist Badge Hunters (unofficially called the Head o’Hunters). My job is to keep the gallery maintained as new badges come in and other badges expire and also to keep the user group under control, though the latter is rarely required.

Shortly after the group started Nivag decided to ask some people to become admins so that he wasn’t the only one announcing badges. Because I was fairly regular at the time he asked me if I was interested, and I was the second member to be made an admin (the first one eventually left). As time went on Nivag was becoming busier and busier in real life, and eventually he asked us admins for someone to take over as group owner. I was already doing a lot with the site as I was still a moderator back then so I told him I was interested. I became owner in January 2011 and the new gallery was made in May 2011 after I left the moderation team and could no longer simply edit the original gallery.

How has the user group changed since it was first started?

Zombie_Fish:
We have become a smaller group of regular visitors nowadays. We did have a massive surge of members shortly after forming as we were the Featured User Group for quite some time (this was before the Featured User Group articles started, so I can’t back this up with a link). This placed us in the top ten groups with most members, but it has since then turned mainly to surges of activity on Mondays when the weekly quiz badges come about. Saying that however, everything can change between this featured article and all the new XCOM game badges.

What are some of the group’s favorite Badges?

Zombie_Fish:
The group is often quite fond of the more mysterious badges. The OMG Pony!1 badge and the DDKR badges were good early examples of this, and we still see it with The Beard Badge, Lol… wut? (one of the very few badges which the Hunters never worked out) and, of course, Rainbow Powah!.

*puts on conveniently placed scarf as a pirate bandana*

Hehe, my phone camera is terrible.

We are the finest treasure hunters you have ever seen travel the high seas! No map is too complicated, no puzzle too confusing and no film reference used as a clue too obscure for our men to crack.

We travel anywhere and everywhere. No matter where the waters take us, we take all the gold we can lay our hands on, and even help others find their precious booty. As long as we get a share of the takings, of course.

Now, I’m afraid we must be off. The wind is calling us.

What are some badges that you’d like to see more of?

Zombie_Fish:
I would personally like to see more badges about featured content by members of the community. Since we haven’t had Letters to the Editor and guest reviews for over a year and things like the RP Digest haven’t been around for even longer (though I do know why the RP Digest stopped), it feels like the site isn’t taking advantage of some of the brilliant writers in the community as much as it used to. That is already kind of changing with the featured user review on the My Escapist page, but I do think badges would also work as a good incentive to get people to write more high quality content with the push that an achievement would come as a result of it.