One of the problems with triple-A games I’ve noticed lately is that they seem to be making an awful lot of assumptions about their audience. It could be a sign of complacency on the part of these creatively bankrupt bastards with too much money that games haven’t felt the need to fill in a great many blanks.

This occurred to me as I tried to imagine if Call of Duty: Ghosts would be any less sickening when you subtracted the nationalistic elements from it. A difficult task, because even the title, Call of Duty, has connotations of mindless unquestioning devotion to a country. ‘Duty’ is one of those words that I group with ‘faith’: often called upon by authority figures as a substitute for having to persuade with actual reason and logic.

The game’s position seems to be that all it needs to do is say that the US is being attacked, and then proceeds with the assumption that you’re on board. It doesn’t have to establish or build upon anything else, just spend the rest of the time showing off military hardware and going into slow motion every time a building collapses. So if you take out the context attached to the real-world nations involved, all you have left is weapon porn. The few characters in the game that have actual names and speaking roles are all blank ciphers, each with virtually the same physical appearance and genetics and no apparent motivation in life except to do what they’ve been told to do as melodramatically as possible.

The ‘realistic’ part of the ‘realistic war game’ designation is now being played so fast and loose that the games might as well be taking place in a fantasy realm or science fiction future, with all the country names changed to made-up ones. And I’m basically describing Killzone, there, aren’t I. Ostensibly a series about a war between the ‘Vektans’ and the ‘Helghast’, but the merest of cursory glances identifies them as Americans and Nazis, respectively. And the plot still leaves a bad taste in my mouth, because I read a summary of the Killzone series, and going just from the backstory, I would honestly have assumed that the Helghast were supposed to be the underdog heroes. The running theme is that they get routinely fucked over by the Vektan authorities and we’re supposed to hate them for making an issue of it.

Believe it or not, my point is not whether or not the alleged good guys have a claim to the moral high ground. My point is that it’s a growing trend that new games can’t even be bothered to try to convince you that they do, and simply sweep forward, without glancing backward to make sure you’re keeping up. Games are not waiting for the player anymore. It used to be merely that games felt overly linear and that they were pulling the player on a length of rope through a sequence of challenges and set pieces, like a cartoon character being hauled through the workings of a clock. But now, it’s almost as if the player has been roped to the game without the game’s knowledge, and the game is simply proceeding forwards, oblivious. Sometimes it pauses as the player becomes momentarily caught on something, but then it just gives an extra-strong push and continues. Let me know if I’m not explaining this well. 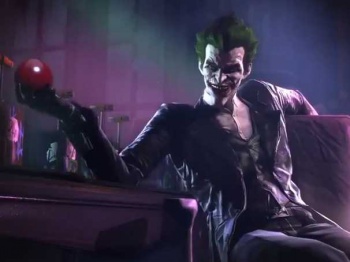 I noticed it when I was playing Batman: Arkham Origins. The game seems to assume that you know the backstory of the Joker as told in Alan Moore’s The Killing Joke as well as who Black Mask is and why we give a shit. But the unearned assumption that we’re on board seems to extend to the gameplay as well as the exposition. You start the game with a bunch of the same gadgets from previous games and none of them are introduced, the game just kind of assumes you know how they’re all used. The combat with ground-level mooks at the very beginning of the game is, I’d say, on a level of difficulty you’d have found at about half-way through Arkham City‘s campaign.

You might say that I would probably complain just as much if a game was overly tutorialized to the point of insulting, as with something like Ni No Kuni, and you may very well be correct to say that. But at least under those circumstances the player and player character actually feel like the centre of the fictional universe. At least that is a game that seems to be waiting for the player to catch up, not seeing them as a piece of baggage it’s forced to carry with it, like a stain on their coat.

And anyway, tutorials are something I miss about games these days. It was nice being put through a small, disconnected prep school before getting your teeth into things. At least it meant that the tutorial didn’t have to be worked clumsily into the beginning. And as it is now de rigeur for the start of the game to be an explosive action sequence, to draw in all the kids with shorter attention spans than a paranoid schizophrenic in a rifle range, we end up with this perplexing trend for game introductions being incredibly easy, low-stress sequences masquerading as action-packed high-stress ones. Where the invading barbarians are perfectly happy to wait outside while you figure out the button for opening the door to the escape tunnel, and where beams suddenly fall half-way to the floor just in time for you to learn how to crouch.

Sometimes tutorials could even be something beyond a dry introduction to the controls. This is a bit silly, but I replayed the Half-Life Hazard Course quite a few times even after I was fully mentally equipped to play the actual game. I liked the way it started a little bit of world building even before the story had begun to start. And I could also extract that cheap Cooking Mama-style appeal of performing simple tasks when instructed and being overly praised by a nice lady. And don’t give me shit. Maybe sometimes I just want to be praised without having to save the sodding world for it, yeah?

This issue of games assuming that we’re on board, like an obnoxious housemate leaving you with the vacuuming, is making triple-A games seem complacent. And that may well be one of the signs of a console generation winding down. They get the feeling that they’ve suckered in all the people they’re ever going to sucker in and that they might as well let the facade drop and show absolutely no respect to their users whatsoever. Although considering the sales figures of the PS4 a lessening of respect for one’s fellow man is something I can sympathize with.