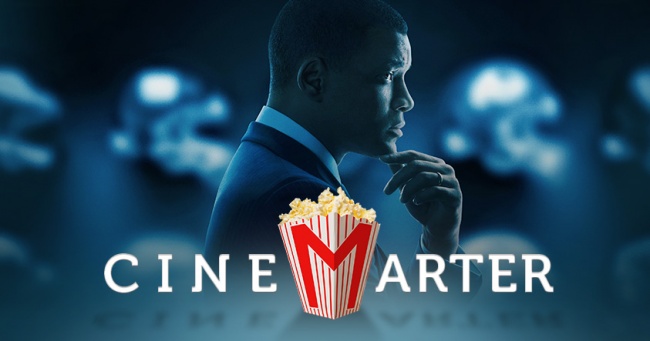 Statistically speaking, if you are an American who has a good time watching sports, you probably enjoy American football – henceforth referred to simply as “football”; let’s not get into this whole soccer/football naming debate today. The NFL is the biggest league in the entire country, football is the most popular sport, and the Super Bowl is the most-viewed televised event every year. This is a business that makes billions of dollars annually – and we haven’t even gotten into college or high school football. So, then, why is the NFL under scrutiny in Concussion? Why is football at the center of this controversy?

The film, set in the early 2000s, follows Dr. Bennet Omalu (Will Smith), a Nigerian-born forensic pathologist working in a Pennsylvanian coroner’s office, as he conducts tests on the body and mind of a former NFL player, Mike Webster (David Morse), who died way before he should have, and didn’t have any easily noticeable brain damage. Dr. Omalu, playing a hunch, runs even more tests and discovers something that would eventually be called chronic traumatic encephalopathy (CTE). After testing other recently deceased NFL players, the link between football – which has players of immense size run into each other at high speeds – and the potential for brain damage became painfully clear. 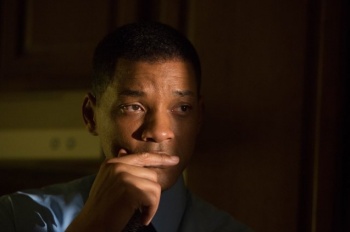 So, why haven’t you heard of CTE before this? Concussion will ensure that you come away knowing the lengths to which a corporation will go to protect its profits. The discovery of CTE is bad for business if you’re the NFL, as the future of football could be put in jeopardy: The rules might have to be changed to ensure fewer concussions; parents might not let their children play the game at a young age, meaning the game becomes filled with less-talented players; or maybe fans will stop watching after becoming concerned with the long-term health of the players. As such, a large portion of Concussion sees Dr. Omalu fighting with the NFL about his findings, the public perception of the league, and concussions in general.

Given that these findings were back in 2002, and a movie like Concussion is just now coming out, you can guess how successful the NFL was in at least partially hiding the public’s knowledge of this issue. The film, much like The Big Short, does a solid job demonizing its target, although without the same level of venom that’s found in The Big Short or something like Spotlight. CTE directly causes deaths, the NFL knew about this, and nothing was done. It’s hard to take the NFL’s side on this, and Concussion isn’t interested in trying to justify the NFL’s reaction. Dr. Omalu is a saint, the NFL is the devil, and people died because of its inaction.

Whether or not you’ll get anything out of Concussion depends on why you’re watching it.

Part of the problem with Concussion is right there. Dr. Omalu is a saint, here presented as basically the perfect person. He takes in a girl from Kenya (Gugu Mbatha-Raw), whom he later marries; he’s so righteous that you know instantly he’ll never morally be in the wrong; he’s perseverant; and he’s so smart that he’s the first one to discover something so obvious. I know a lot of people are getting on Star Wars: The Force Awakens for having a “Mary Sue” character, but we’ve got a better example right here – assuming we’re going to continually misuse that term, of course.

But, then, Concussion is a biographical film, and when the subject is still alive when these types of movies are made, it’s rare to see heavy criticism of them. More of an issue for Concussion is that this is a dry subject, and the film struggles to make it exciting for the audience, using an absurdly lengthy feeling two-hour running time and a basic and repetitive plot to tell this story. This subject probably something that would have been better as a documentary, as the subject matter fits that genre better, and it probably could have been even more biting. While the denials are already up, it’s been proposed that the Sony altered Concussion to appease the NFL, which isn’t something that is too difficult to believe. An investigative documentary wouldn’t likely have that issue, since it wouldn’t have a $35 million budget it needs to make back or an A-list actor as the star.

Will Smith is strong in the lead role, though, as impossibly perfect as the protagonist could be. He hits all the requisite emotional notes and gets to do what I can’t disprove to be an authentic Nigerian accent, so go him. Most everyone else just shows up for the ride. Alec Baldwin, Albert Brooks, and Gugu Mbatha-Raw get so little to do that you can almost forget they’re in the film. Luke Wilson plays Roger Goodell for what feels like maybe a scene and a half. David Morse and Adewale Akinnuoye-Agbaje are both former NFL players, but the film isn’t really about them or their CTE symptoms – even though that might make a bigger emotional impact on the audience. It’s the whole “tell vs. show” concept.

Whether or not you’ll get anything out of Concussion depends on why you’re watching it. If you want to learn about concussions, CTE, and the lengths the NFL went to – and in some respects still goes to – in an attempt to hide the issue from the public, then you’re in the right place. And if you’re here to see Will Smith deliver his best performance in years, you’ll leave satisfied. But if you’ve done even the most basic reading on this topic, there’s nothing the film covers you won’t already know, and it delivers its story in a dry, generic, and repetitive way with a flawless protagonist at its center. It should have been a documentary.

Bottom Line: While it would have worked better as a documentary, Concussion nonetheless shines a spotlight – albeit a shallow, easily researchable one – at an issue worth talking about.

Recommendation: If you’re ignorant of the concussion issue in the NFL, Concussion is worth seeing. If you aren’t, you won’t get much else from the film.