Constantine‘s “The Darkness Beneath” could have been an engaging monster-of-the-week, but it doesn’t quite catch on.

A lot of comic fans out were incensed to find out that John Constantine wouldn’t be smoking in the TV adaptation of Hellblazer. It seemed like a minor nitpick to me, given that there were lots of ways to showcase the character’s addictive personality. Still, I imagine viewers sat up straight for “The Darkness Beneath” when Constantine finally sticks a cigarette between his lips… only to get distracted to and put it away again.

It must have been incredibly frustrating to catch a glimpse of something fans desperately wanted but nothing ultimately comes of it. In a way, that’s kind of what I feel about this second episode. There’s some good character moments from Matt Ryan as Constantine, and the monster itself is an interesting twist on the vengeful spirit origin. But even then, nothing seems to click. In other words, the cigarette is right here in front of us, but “The Darkness Beneath” isn’t doing anything to light the fire for us.

Want to watch the episode for yourself? Constantine‘s “The Darkness Beneath” can be found on the official website or on iTunes.

Following the lackluster pilot, Constantine has committed himself to investigating the dark forces that have been spreading across America. His first stop takes him to Western Pennsylvania, where the local miners are being murdered in a surprisingly brutal fashion. Literally looking beneath the surface of the town, Constantine discovers it’s creatures of the Earth who are committing these crimes. The problem is they should have no power above the mine, which means something, or someone, is giving them abilities beyond their domain.

After last week’s demons, who weren’t so different from your average Supernatural episode, Constantine‘s new enemy is rather interesting. They’re basically protective spirits, usually the ghosts of fallen miners, who try to warn the living when disaster is imminent. In other words, they’re the good guys, and have no desire to be above ground committing murders. But they have no choice, because the darkness across America is making them into something else. While in practical terms, they’re acting like any other murderous spirit, its a nice change beyond the usual “anything supernatural out there will kill you” mindset of other shows.

It’s also a great opportunity for Constantine to show a little humanity. Having grown up in Liverpool, Constantine is already fully familiar with these mining spirits, and actually expressess some sympathy for them. He certainly seems to be more concerned about their welfare than the mining leaders who are being targeted. It’s a nice character moment showing Constantine isn’t just some magical know-it-all, and has compassion beyond feeling sad for those burned in his path.

The downside is that most of this sympathy comes from Constantine telling us he’s sympathetic, instead of showing us. In fact, being in a mining town like this was a missed opportunity for Constantine to show off his blue-collar roots. For example, he could have spent more time drinking and chatting up the actual miners who might know these spirits. Instead, Constantine rolls into town (during a funeral), interrogates a former pastor whose son worked at the mine, then sneaks into the funeral reception and antagonizes the locals. 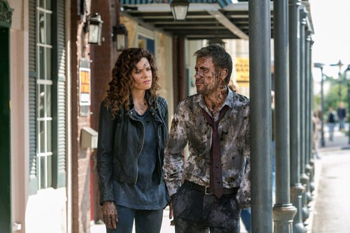 Sure, I get that John Constantine is supposed to be a bastard. But he’s best as a charming, likable bastard, someone you want around as a friend or drinking buddy but eventually stabs you in the back when you least expect it. Instead, this version of Constantine is a loner, either standing above everyone else as a magical expert, or moping around about his all-encompassing guilt. Neither approach makes him feel especially human, although again, his reaction to the spirits is an interesting step in the right direction.

“The Darkness Beneath” also introduces Angélica Celaya as Zed Martin, Constantine‘s new female lead after Liv Aberdine bowed out last episode. Apparently test audiences didn’t take to Aberdine as a psychic with unknown ties to the magical community. So the writers replaced her with Zed….. another psychic tied to the magical community. Except Zed is uncomfortably obsessed with Constantine, taking every opportunity to stand very close to him to “prove” they have sexual chemistry.

Perhaps Hellblazer readers will see a deeper meaning here, since Zed was a character in the original comic books. But so far, there’s literally no reason for her to be here. It made sense for Liv to stick around, since Constantine had an obligation to her. But Zed just shows up, reveals that she dreams of Constantine every night, and insists that means they’re supposed to be partners. And the best Constantine can respond with is a begrudging acknowledgement that she’s useful, or simply admitting he’s too tired to argue about it. John and Zed don’t exactly have a Mulder/Scully level of chemistry here, so I’m confused as to what exactly the point behind this pair is.

That being said, horror fans should appreciate the ghostly murders themselves. The spirits actually come up with some visually interesting ways to eliminate targets, such as pumping a flammable substance through a shower or filling car with thick, muddy flood water. These deceased miners seem to be incredibly powerful, although shortly after Constantine realizes what they are, that creativity evaporates. The next time a spirit appears it just rushes at a guy to try and choke him to death. It’s a little anti-climatic, but it does give Constantine room to come up with a clever solution to defeat them, which I won’t spoil here.

Regardless, I’m not sure this remake of Supernatural with a British magician is really working out for Constantine. But perhaps future episodes can prove me wrong.

Bottom Line: “The Darkness Beneath” is a mixed bag of an episode. While the monster itself is interesting, John Constantine and his new partner Zed Martin really don’t have the chemistry to add much to the plot. There’s still not enough substance here to engage the audience, and by the time it’s over, the monster is probably the most sympathetic character you’ve seen so far. Matt Ryan brings a few good character moments to Constantine, but we’re still waiting for something that’s going to resonate in kind the same way Hellblazer did.

Recommendation: It’s not a great episode, but it’s still a slight improvement over the pilot. Hopefully Constantine will pick up the pace and finally strike on what makes these characters work.