A long time ago I proposed in this column a thing that I’m still determined to turn into an actual Thing: that the ways in which video games are appealing to users can be broken down into three categories: Context (by which I mean story), Challenge (by which I mean challenge) and Gratification (by which I mean everything that is fun on an immediate, primitive level with no apparent involvement from the other two). The milking-stool model. A good game should endeavor to make use of all three legs, but a particularly strong showing in some legs can make up for deficiency in others. It might be a wonky stool, but it’d still stand up.

Later I kicked myself when I realized that a far better word for what I meant by “Gratification” would be “Catharsis”, which has both a clearer meaning and a C at the start. So now it’s the three C’s theory. And the example I’ve often given to illustrate the Catharsis leg of the stool is Dead Rising. Even without the benefit of context or challenge, it’s just plain visceral fun to run around the sandbox smashing up tissue-paper zombies with colorful superweapons. In a cocktail dress.

The standard campaign of Dead Rising 3 seems to be designed to appeal particularly to Catharsis, to the point of sacrificing the other two – the traditional extremely strong challenge of previous games in the series is hugely kneecapped by the ease with which one can acquire combo weapons and vehicles. In keeping with the attitudes of next-gen triple-A games, you are invited to fuck around and create spectacles that might momentarily impress someone walking past your living room window, and the game is happy to remove whatever stages get between you and that as it can get away with.

So what, right? As long as it’s really cathartic and over-the-top, it makes up for deficiencies elsewhere. That was my argument. But I noticed something, as I watched a friend demonstrate the best way he’d found to get big points very fast. He took a car battery attached to a sledgehammer and laid into crowds of night-time zombies, using special attacks whenever they became available, with a special book equipped that increased the durability of melee weapons. And he had two of these car battery hammer things, so he was laying into those mumbling sods for what felt like ten whole minutes, building ridiculous combo kills going into the several hundreds.

And inevitably, it got boring. Just as the overlong X-ray moves in Mortal Kombat go from startling to creepy to just plain tedious when you’re watching the same ones bout after bout after bout, Dead Rising 3 just served up the zombies and the sledgehammer served them straight back. After a while it was more like watching someone work a production line.

Which made me go back and remember all the times the game had seemed a bit meh as I’d played, even while I was mincing up the walking dead with fiery dragon costumes. Something was getting in the way of the catharsis factor, which seemed odd, because there was so little else besides the catharsis factor. Perhaps, I realized, the three-leg model was due for a bit of revision. A qualification needs to be added: namely that catharsis needs to be working alongside something else to work. 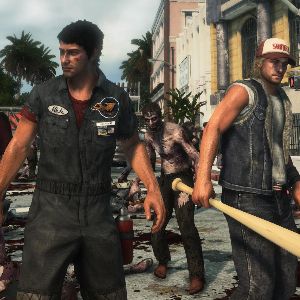 Allow me to quote the dictionary.com definition of ‘catharsis’. “The purging of emotions or relieving of emotional tensions, especially through certain kinds of art.” Catharsis is an emotional release. And for it to work, it needs to have some emotions to release, first. Otherwise you’re just pulling the flush chain on an empty cistern and wondering why the turd isn’t going away.

So, catharsis is something that needs to be built up to. And both the other two legs can do that. If the context leg has established that character A is a complete dickhole who deserves to be force-fed his own car, catharsis is achieved when we successfully get his mouth around the front bumper. Challenge does it as well – if we’ve had to work very hard at defeating a boss, catharsis comes when we hammer his last few pixel-widths off his health bar, along with some of his teeth and most of his blood.

Catharsis could certainly work if the player has come into the game with some emotions already built up and ready for release. Like they’re very passive-aggressively angry at their boss and want to release all that by smashing a few zombies with hammers. But I don’t think a game should assume this to be the case, and anyway, it’s probably not healthy to bottle these things up. They should get things out in the open and smash their boss up with a hammer instead.

So I feel more positive about Dead Rising 2 because it was manageably hard. It was a game of both challenge and catharsis. I could almost appreciate the routine of having to bring armfuls of specific items back to the workshop, dodging flying zombie mouths left and right, because I knew that all I had to do was survive this and then I could come back at those same zombie mouths with a chainsaw on the end of a traffic light or whatever. Dead Rising 3 cutting back the challenge to let you, say, electric bludgeon entire mobs for ten minutes straight feels like it’s skipped a few steps. It’s the classic triple-A error of making things simpler and more accessible for all the unambitious twats, forever blind to how this undermines the essential appeal.

It’s like comedy in a lot of ways. Another word beginning with C, you’ll notice. Comedy is all about building something up and then releasing it. I’ve heard theories that tension release is how early man evolved the concept of a sense of humor. Some hairy tribesman believed he’d sensed a sabre-toothed tiger, but then he turned around and saw only his daughter’s toy dead cat, and the release of tension at that point gave him a positive feeling. But a joke doesn’t work if you omit everything but the punchline, and there’s nothing funny about being mauled by a hitherto unknown tiger. Not until he starts doing the glove puppet routine with your guts.