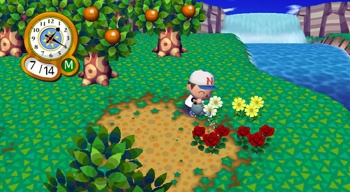 This year’s E3 was a bit like visiting your high school during the summertime – everything looks the same, but all of the people are missing and the halls are spookily quiet. There were no fire dancers this year, and the half-naked booth babes were swapped out for lovely ladies in tasteful gray skirts and flip-flops, but it was nice not devote entire hours to waiting in line at Starbuck’s. And oh, yeah, there were games, there, too.

E3 is still trying to figure out what it wants to be and is accordingly still suffering from a few growing pains, but that doesn’t mean there weren’t golden moments to be had last week in Los Angeles. With that in mind, I give you my personal “Best Of” list. It’s not the top five best games from the show, but rather a list of my favorites, the games and moments that are still putting a smile on my face as I sit here, a week later and on the other side of the country.

5. Left 4 Dead – Valve’s zombie slayathon is everything I want a multiplayer game to be. It requires teammates to work together, throws in a bit of humor (the “You have been vomited on!” alert never fails to elicit a chuckle), and shapes the game according to the group’s skill level. It’s beautifully constructed and challenging, but simple enough so that newcomers can jump right in and not feel like they have a monstrous learning curve staring them in the face. Left 4 Dead could have been a mindless gunfest that happened to support four players, but instead it’s a smart, engaging experience that’s accessible to players of varying skill levels. Also, you get to shoot zombies, which is always +10 to entertaining.

4. Animal Crossing: City Folk -It’s really just a slightly bigger, prettier version of Animal Crossing on the DS, but I don’t see that as a bad thing. Wild World was already charming and addictive, so things can only get better now that the world is bigger (you can travel into the city instead of being stuck in your tiny town) there are new holidays (including Easter and Carnivale) and new items, like furniture and clothing, will be added to the game regularly via WiiConnect. Animal Crossing: City Folk doesn’t forge new territory or dazzle you with graphics, but it does something just as important: It makes players happy.

3. Capcom is Hot, Hot, Hot – Capcom’s booth at E3 was incredibly hot, both literally and figuratively. My shirt was soaked clean through by the time I’d left and my electrolytes were probably dangerously out of whack, but it was a small price to pay to see what the publisher had to offer. I expected Resident Evil 5 to follow in RE4’s footsteps, extending the series’ longevity with another solid entry, but the addition of co-operative play makes it feel practically brand new. XBLA/PSN title Flock was adorable and clever, Street Fighter IV made me wish I could pull off a fireball with any kind of consistency (and its art is just stupidly gorgeous), and Dark Void came out of nowhere to take my breath away. Vertical cover system? Cool. Nikolai Tesla creating the equipment you’ll use to fight aliens? Supercool. Aerial combat designed by the guys who made Crimson Skies? The cool meter just broke. 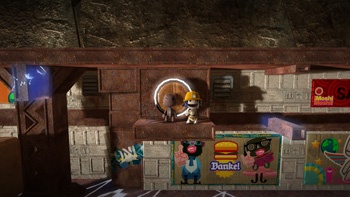 2. Sackboy Steals PlayStation’s Show (and Many Hearts) – To take the edge off the coma-inducing boredom generated by the part of Sony’s press conference discussing sales figures and the like, the folks at Media Molecule created a special LittleBigPlanet level to act as a visual aid. Bar graphs are far more enchanting when the adorable and charming Sackboy, grinning ear to ear and clad in a Boston Celtics uniform, is leaping from bar to bar. The fact that the entire level was made using existing LBP assets – nothing special was created for the show- reminded everyone in attendance of the game’s seemingly endless creative possibilities. It also did a fine job of distracting everyone from the relative lack of anything exciting in Sony’s briefing, not that I’m cynical enough to believe that was Jack Tretton’s major motivation of course.

1.“You know The Who are playing this thing tonight, right?” – I was thinking about blowing off the Rock Band concert. I was exhausted, internet problems had prevented me from posting as much content as I would’ve liked, and I still had loads of writing to do. That’s when my fellow game journo filled me in on just exactly who it was headlining that evening’s show at the tiny Orpheum theater. Roger Daltrey and Pete Townshend may be old enough to be your granpa, but they can still rock most mightily. Even when both Daltrey’s voice and Townshend’s string broke, they were magnificent to watch, owning the stage with the casual ease that only the truly great can achieve. I think Wired’s Chris Baker summed up my feelings best when he said, “I didn’t do anything to deserve this. I didn’t stand in line, or win a contest, or pay a lot of money. I wrote about Mario.”

I don’t know if the folks at Harmonix did it to celebrate the inclusion of The Who in Rock Band 2, or simply to prove that they’re the coolest cats in town. All I know is that The Who got an audience full of exhausted, jaded journalists who rarely allow themselves to be seen enjoying anything, to jump around, clap, dance, and cheer. Well, except for the guy who was liveblogging the whole thing, that is. (Yeah, seriously.)

So that’s the good side of this year’s E3, and if Peter Molyneux games have taught us anything, it’s that where there is good, there must also be bad. Tune in later this week for my list of the five worst things of E3, which may or may not include the hallways of my hotel, which smelled suspiciously of cat pee. At least I hope it was cat pee.

Susan Arendt spent far more than she should have in the gachapon machine at the Famima!! around the corner from her hotel.