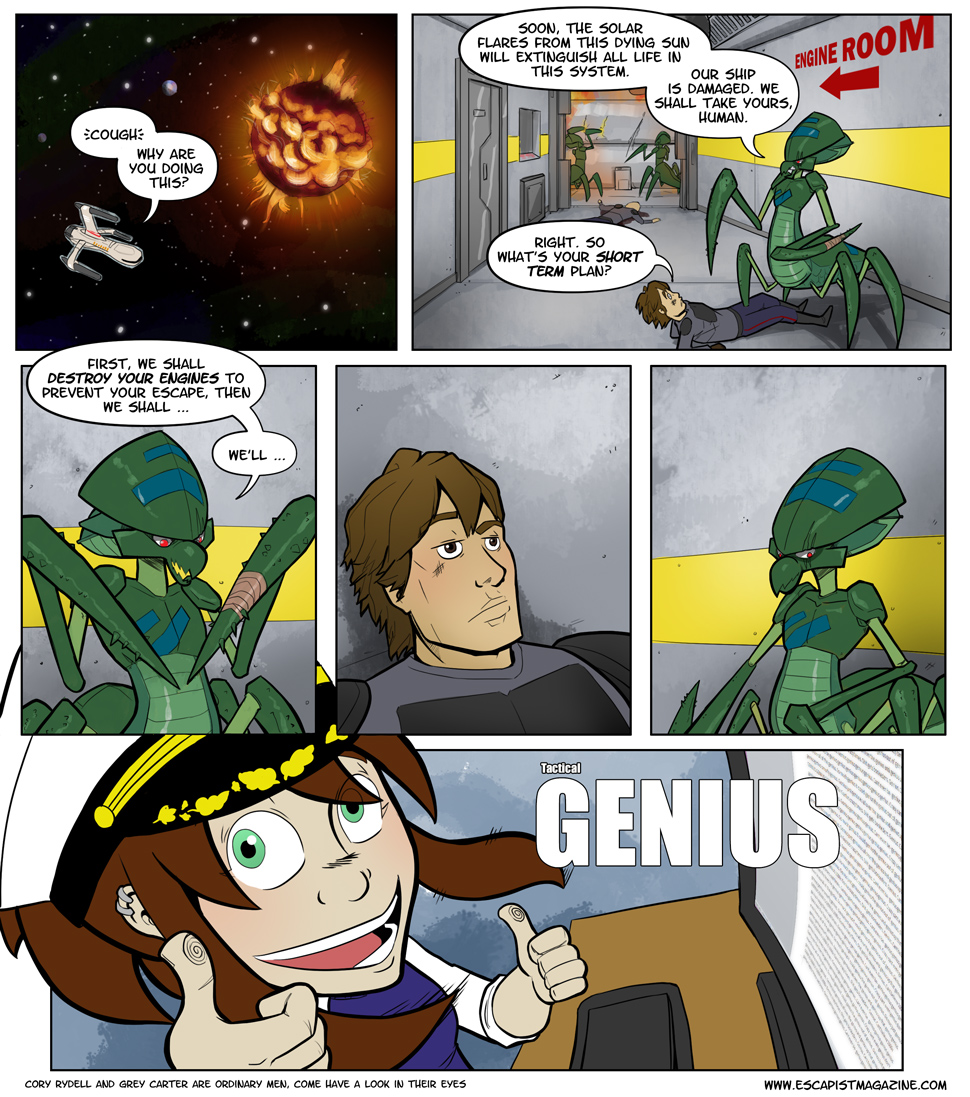 “You find a number of ships fleeing from a small space station. You hail them, asking what’s wrong: ‘Help! We’re being overrun by some sort of giant alien spiders!'”

One cliché that crops up whenever people talk about strategy games is the so-called “one more turn” phenomenon. It’s quite simple, really. You sit down to play one more turn in [game of choice], but that one turn turns into six hundred, and before you know it, it’s 6am and you’re surrounded by bottles of your own urine. Technically, FTL doesn’t have turns, but its tense journeys into the final frontier, so often cut short by the insectile space-dicks depicted in today’s comic, do tend to blend together into enormous, multi-hour sessions.

It’s very easy to get frustrated with the game’s focus on random chance. It can, and will, fuck you over at every given opportunity, and the end boss is made of 100% Adamantium bullshit, but the often savage difficulty makes each play-through feel momentous and unique. The game’s timed nature, represented by a dogged pursuing fleet that cuts off avenues of exploration as you advance and the aforementioned (bullshit) last boss that requires numerous ship upgrades to beat, seems needlessly constrictive at first, but it actually drives the player to create their own exciting space stories. You have to make snap decisions and take risks in FTL. Playing conservatively might save your hide in the short term, but skipping battles and exploration opportunities means you won’t have enough upgrades and crew experience to stop Johnny Mantis from ruining your shit in the later sectors.

FTL isn’t without its flaws, but it’s a sterling example of an indie game and a perfect opener for a franchise. Games these days tend to be overflowing with stuff; arbitrary systems and tasks that add nothing to a game save complexity. FTL is the opposite, despite its grandiose vision of space exploration, it remains a focused experience. It breaks new ground, but its reach doesn’t exceed its grasp. When you break it down, the game features a relatively small pool of ideas, but as a result, it doesn’t fail in realizing any of them. I can’t wait to see a sequel.